For armchair exploration fun and session planning, I'd like to have their orbits displayed when "zoomed out" (eg 90 deg). I already imported an appropriate MPC list and, in the Solar System Editor plugin, I enabled to show the orbits permanently for all objects.

Orbits are plotted only when I zoom in more (eg a FOV of a few degrees). I understand why Stellarium behaves that way (to avoid clutter and keep calculations to a reasonable level), but is there a way to make it plot the orbits at wider views nonetheless? I have no magnitude limits set. I know the CPU will be busier but that's not an issue.

For comparison, I'm attaching the SSO configuration over a wide view in which the orbits of the planets and some oftheir satellites are shown - I'd like to get the same for asteroids.

Thanks for any suggestions. 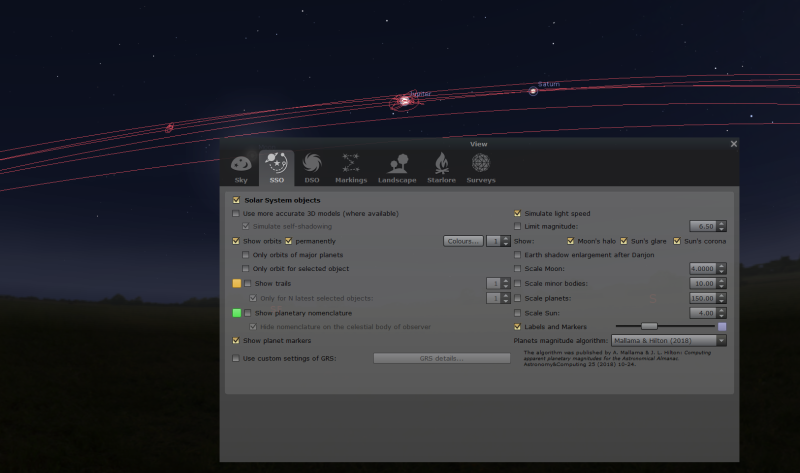 Please try move "Labels and Markers" ruler to right side.

Thanks for the reply. I tried, but it didn't make any visible difference. I'm including a screenshot with that configuration window and Juno in the background - no orbit is shown. This is after making the change, saving the settings and restarting Stellarium (just to be sure). I compared config.ini before and after. labels_amount changed from 3 to 10. I'm including the entire section where the setting is, in case it helps. 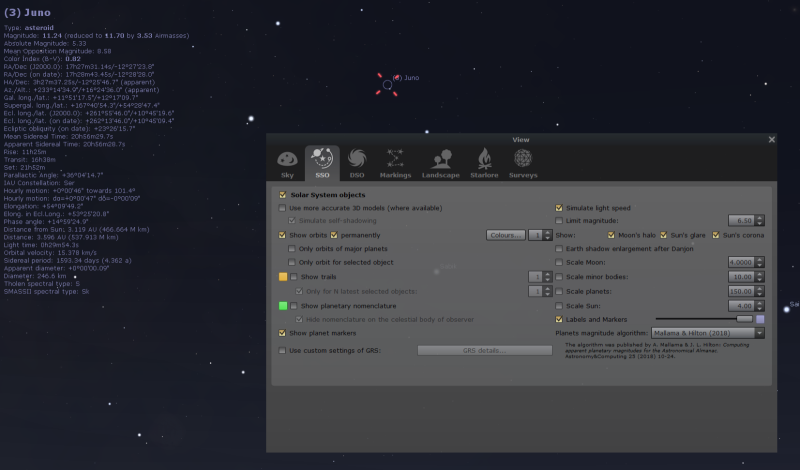 Objects to draw are selected based on their apparent magnitude and current fov. For large fov, we cannot go too deep. As soon as an object is excluded, the orbit is also not plotted. Currently there is no override for this. Of course it would be nice to see the asteroid belt with thousands of objects, but the computation may be too demanding.