I’m looking at a custom cell to hold front-mounted DERF on a 8 inch SCT. How important is the angle of the DERF in relation to the collector plate (right angle to the light cone)? How precise do I need to be with machining of the cell?

With these front-mounted D-ERFs, are they typically held with a threaded retainer ring on the telescope side of the filter?

I had my 214mm x 15mm DERF mounted to the front of my C8 Edge via a holding cell that is orthogonal to the entrance to the scope. No tilt necessary. Ideally some tilt is beneficial, but I didn't have to induce any and had no reflections. Even with another secondary DERF in the focuser, also orthogonal to the light cone. No reflections with either.

That said, in theory, an ERF should have around a 0.5 degree angle of tilt to throw off reflections. This can easily be induced on these big filters by just putting felt or a small gasket on one side of the DERF and opposite the other, just enough to provide a tiny bit of tilt in the chamber. In some systems, tilt is needed for the reflections with lots of filters in the imaging train. So my experience with my personal filters here, none of them have specified tilt and are all flat to each other and I have no reflections both on SCT and on refractor with the same exact filters in two separate chambers, described below. Just keep in mind, if you do have reflections, simply allow a little tilt and you're good. If the chamber has 1~2mm of play (which it should for ease) and that can give you the room you need to put a little something in there to induce tilt.

I had my first ERF cell made by TeleskopService (T.S.), made of aluminum, out of Germany; I gave them specifications within 2mm of tolerance of my filter size (with felt lining in the chamber) and the outter lip of my scope where it would attach. Mine attaches with threaded nylon bolts that grip via friction. I would advise looking into a little more robust means to attach to the C8's front, such as making sure the bolts can go behind a lip of some kind to give it more security. These filters are huge and heavy so you wouldn't want to see what happens when the scope isn't pointing an at upward angle and the weight shifts down. There's just nothing to grip onto on C8's other than the front lip. I would feel a lot better if it had at least one threaded hole for the bolts to thread into for securement. For this cell, the filter cell is two part. The first part just is a retainer chamber with a threaded ring that holds the inner filter in place. Then this entire chamber bolts to a system that attaches to the scope's outer diameter. Anyhow look at the following image; I would suggest the bolts go farther back so they can grip behind that black lip on this C8 Edge so that it would be even more secure, mine was a little short in this regard because I didn't think about this and didn't specify (rookie move on my part). 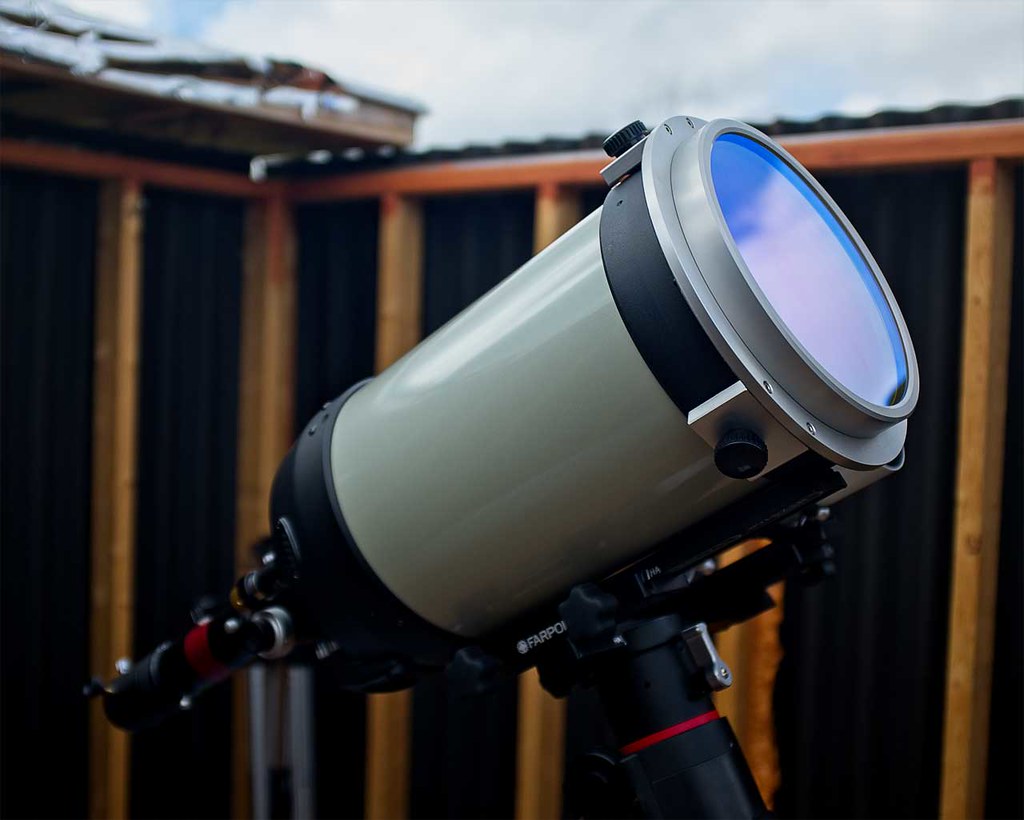 My second ERF holding cell is 3D printed by Michael (Astro Rocketeer) and its custom fitted to my C6R's lens holding cell so it grips behind the lens flange and sits totally orthogonal to the objective, no tilt, and it has no reflections either even with a 2nd DERF in the imaging train at the focuser. This is the same big 214mm DERF but down sized in terms of its holding chamber to work on smaller scopes and it holds on so secure that I can turn it upside down. I much prefer how secure this one sits. For this cell, it's also two chambers essentially, the first chamber is a filter holding chamber that sandwiches the DERF in between a cup and a plate lined with felt. Then this chamber attaches to a coupling chamber that slips over the OTA objective cell and the bolts lock in behind the objective cell flange and locks on tight. This is the same DERF as above, the big one, just in a much better designed and thought out ERF holding cell and its super secure on there. Learned from my first ERF mount as mentioned above.

I plan on re-making my big cell for my C8 Edge like this white one here on my C6R so that it will attach on there very secure; eventually. 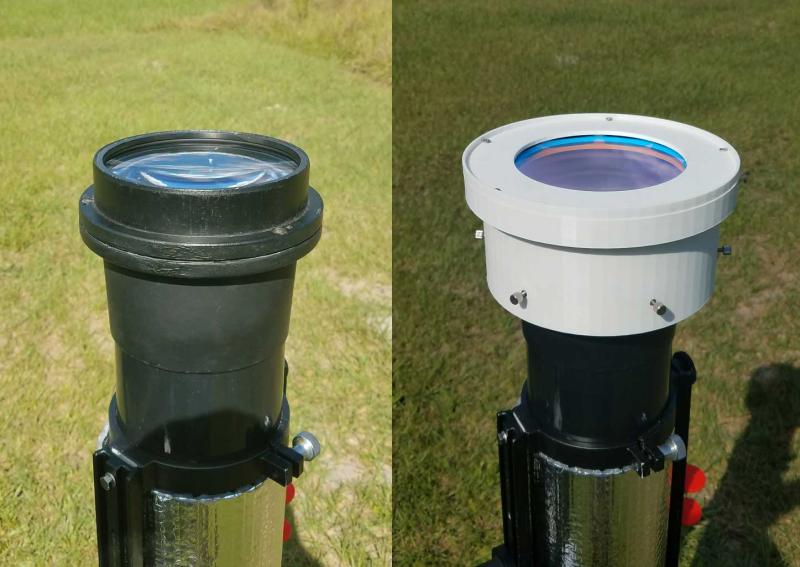 Marty.
Could you not just replace the three side tabs on your filter mount with longer ones that came back behind the black part of your OTA? It looks like any easy mod.

Marty.
Could you not just replace the three side tabs on your filter mount with longer ones that came back behind the black part of your OTA? It looks like any easy mod.

Yes, that is an option. The problem is getting someone who can do that with aluminum. At the cost from Germany to me, I could just print something for nothing. But, might still work. I'd have to contact the maker of the cell and see if it's even an option to get extensions or if they just won't do it without a total new build/order as most places are like that since its not a money maker for them. I suppose I could fine a local machinist too. Or, just 3D print anything needed. It's so simple to 3D print that I could make a new cell and have it be modular for multi-use and not just that static aluminum shell, allowing it to better fit several scopes rather than just one. So I may go that route.

DERFs are generally AR coated on the rear surface and therefore their ghost reflections are difficult to see, and do not show up with normal exposures.

I would suggest 1.5 to 2.0 degrees as an optimum ERF tilt if you choose to do so. I believe this is the amount of tilt used by Coronado and Lunt for their front mounted ERF's, and most of their internal filter components (ITF, BG38, etc.) as well.