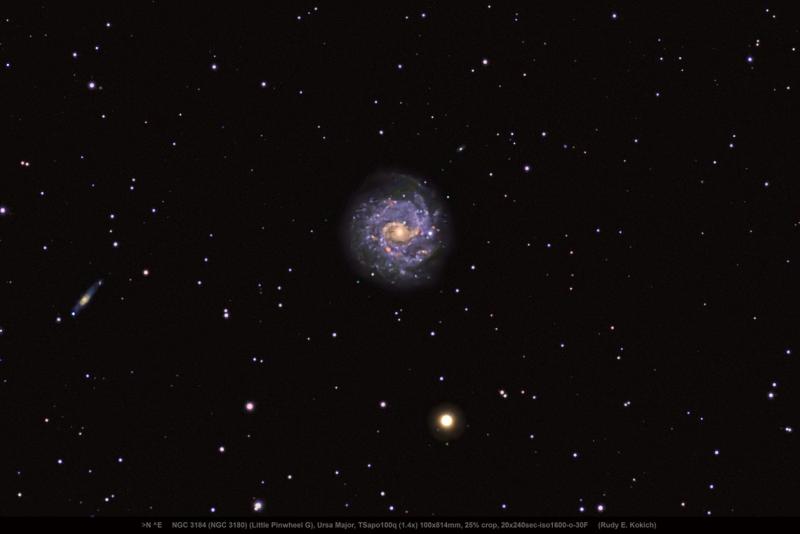 NGC 3184 is a face-on mixed barred-nonbarred spiral galaxy with morphological classification SABc. NED database lists its apparent magnitude in the visible band between 13.5 and 11.49, which is the most recent (1977), and will be adopted here, although it appears at least 1 magnitude brighter on my photograph. Its mean redshift-independent distance is 12.268 Mpc, or 40 Mly. Its redshift-based (Hubble Flow) distance calculated in the chart below is 27.35 million light years, and recession velocity 590 km/sec. Based on its apparent diameter of 8.5 arcmin, the galaxy is about 67,500 ly in diameter. Its calculated absolute magnitude of only -18.14 is probably too low, and should be updated with more reliable photometric data. The galaxy has a small, bright nucleus and long spiral arms rendered prominently blue by large numbers of hot, young stars and OB associations. Due to an error in the New General Catalog, this galaxy is also listed as NGC 3180. The galaxy is notable for a high abundance of heavy elements, making it suitable for rocky planets and interesting exobiology. From its perspective, our Galaxy would appear about twice as large in diameter, and much brighter. Photography indicates the presence of several large star-forming HII regions. The most prominent one is designted as NGC 3181. The annotated image below indicates the position of an ultra-luminous X-ray source (ULX), possibly indicating the presence of an intermediate-mass black hole. Such objects can be associated with bright transient optical signals lasting several days.

About 25 arcmin to the south is NGC 3179, a magnitude 13.7 (g) galaxy, 2 arcmin in apparent size. It seems to be a giant spiral galaxy, 326 million LY distant, and about 70% larger in diameter and brighter than the Milky Way.

The most remote recorded object is quasar (QSO) [VV96] J101732.7+410722. Based on its redshift and apparent magnitude, it can be calculated that the photons presently reaching us were emitted 6.2 billion years ago, long before the formation of our Solar system. It is about 83 times brighter than the entire Milky Way galaxy, and is receding due to the expansion of the universe at nearly half the speed of light. 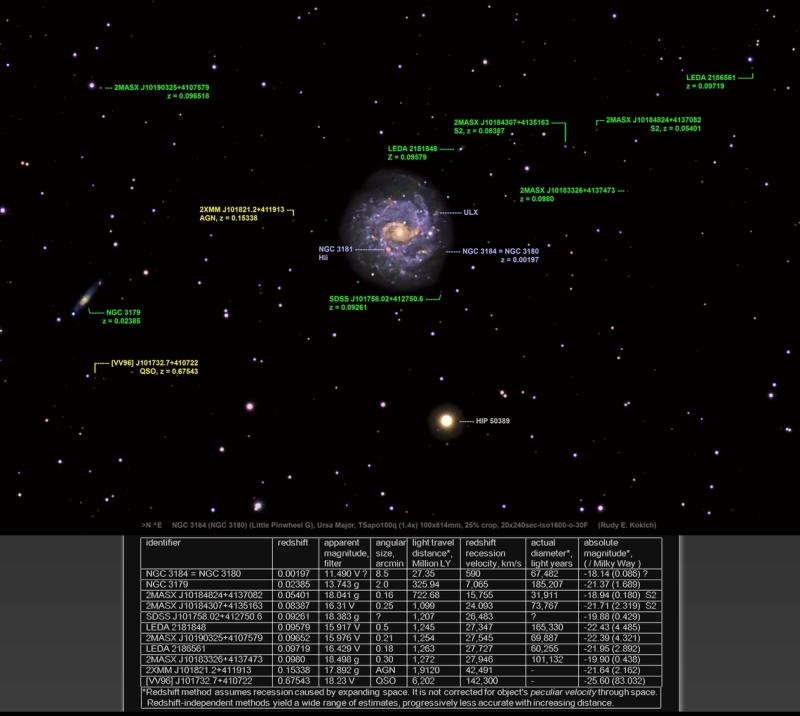 Apart from being a very nice image, that's a wealth of background information

packed into that annotated image.

Thank you, Mert. I am perpetually amazed at the wealth of information which can be calculated about the faint background galaxies, many of which are no more than a pinpoint of light.