I just received my first Mak and my question is, how do I modified it to accept a 2  inch diagonal? It currently has a 1.25 visual back. I think I read in a topic on Cloudy nights  a couple of years ago that an adapter is needed but I can't remember what kind.

I don't have a 127 SLT, but what I have read from their owners and various vendor sites is that they need an adapter.  Per AgenaAstro's site:  "Some intermediate sized Maks like the Celestron Nexstar 127 use a 44.5mm diameter thread that many refer to as a 'Maksutov thread'. The Blue Fireball C-07 adapter will convert this to a 2"-24 SCT thread."   Scopestuff has a similar adapter and explanation:  link.

Either of these will allow addition of a standard SCT R/C and/or 2" visual back.  Of course when the adapter is on, the original Mak threaded 1.25" visual back cannot be threaded on.  You will have to remove it to use that.

A pertinent question for owners of the same model scope is exactly what model/mount you are working with, and what limitations are there for attaching 2" accessories?  One must consider:

At any rate, it is best to think this through before leaping.  Consider what you already have (and can therefore test more easily/less expensively) and what capability you want to add, before going all in.  Hopefully SLT owners will provide real world examples.

I have a 127 SLT. Great scope, compact really shines on planets, moon, and bright dso. Not as bright as my 8 “ dob, but it has goto, and tracks and is super easy to use. I have no idea why anyone would want to put a heavy clumsy 2 inch diagonal on this little beaut as Redbetter said the larger diagonal and eyepiece will put  added weight and extend the length of the scope perhaps making it hit the tripod. The tripod with this scope is  marginal, the scope shakes at the slightest touch or breeze. I use vibration damper pads and only extend the tripod legs a couple of inches to make the shakes acceptable for visual. Putting more weight and making the scope heavy on the back end, makes no sense to me, but if you want to try it go ahead.

The adaptor mine came with is similar to the 1.25" in that it has a ring that winds on to the back of the Mak and the body is a pressure fit as the thread winds on tight.  You can ask a retailer if they may carry this adaptor, though it may take some searching (or you may get lucky).

Some people insist that 2" eyepieces will vignette with this scope.  Not being one to just blindly accept what is written I decided to check things out for myself to see how significant this vignetting is.  I use a 38mm 70° & 30mm 80° 2" eyepieces with this scope and I found no trace of vignetting during both day time and night testing.  Nada, zero, zip, zilch.  I get the distinct feeling that everyone who's claimed vignetting would be present hasn't actually tried it and are just parroting what they have read.  About many things with this little scope...

I have been astounded by the image this 127 Mak gives with long 2" eyepieces, and they do provide a much wider FOV than 1.25" EPs can.  Also, some 2" eyepieces are MUCH heavier than others and the ones I used are not very heavy.  If you do go down the 2" way, you will need to be aware of this and how this may affect the performance of the mount.  The tripod of the 127 SLT is not the most robust, so balancing the scope in the mount will be very important.  What I don't recommend is sticking a 1kg lump of an eyepiece in the back of this scope as this will result in a scope that is impossible to balance because it will be so rear heavy.  Lighter 2" eyepieces are the way to go with this scope, and the ones I've tried performed very well with this little scope.  And don't forget that a 2" diagonal is also a substantial item.

That is not likely to be the same type as the Celestron 127 as the baffle sizes are different, so perhaps not helpful for this particular tube.  From what I can tell these are the same optical design probably made in the same factory, but not the same tubes at the point of accessory attachment from what I have read.   My understanding is that the Celestrons are M44.5x1.0, although that is not firsthand knowledge.

I want to make it clear that I am not trying to discourage use of a 2" diagonal or a reducer/corrector (which would also require an SCT adapter as well as an SCT 1.25" or 2" visual back.)  I just want to make sure the OP has considered the various aspects before going this route.   Think of this as a system rather than doing it one piece at a time and running into unanticipated hurdles.  Going to 2" is generally not cheap unless one has many of the accessories already.

Consider this:  For my old 8" SCT I didn't have to worry about focuser knob interference, clearance with the fork base wasn't an issue, and I was using a dovetail weight system for balance anyway.  For the 127 f/15 Mak I already had a 2" refractor diagonal and 2" visual back (that I had been using for the 8" SCT) so it was easy to test the 127 with existing pieces.  The 127 did not have a focuser problem.  The ES 127 has a dovetail rather than direct fork attachment, so I had some balance options that some OTA's might not have.

As per all the information in the previous posts, be careful before you leap. I already had a few of the less heavy 2" eyepieces and like Maroubra Boy, wanted to inexpensively check out what this little scope can be pushed to do. The screw on visual back is an Antares short body model which I already owned and it's behind an Antares Focal Reducer which gives the focuser all the clearance it needs. Without the reducer, the focuser clears but not by much and you won't be tilting the diagonal to the right or left very much. I slid the OTA up the dovetail as much as possible to counter the additional weight. My scope is the Celestron 127SLT.

My adapter ring came from ScopeStuff but if you are patient there are apparently cheaper alternatives overseas but I can recommend the ScopeStuff one as very nicely machined and finished for $20.

I've had good luck so far with the mod but haven't really given it a good run in dark skies yet.

I would try my inexpensive route before you throw your wallet at this. Maybe try and borrow some bits and pieces after you get the adapter ring.

Also keep in mind that the Alt axis on the Goto scope has a slip clutch which heavy stuff might overcome. If it slips, you've lost your alignment at the very least. 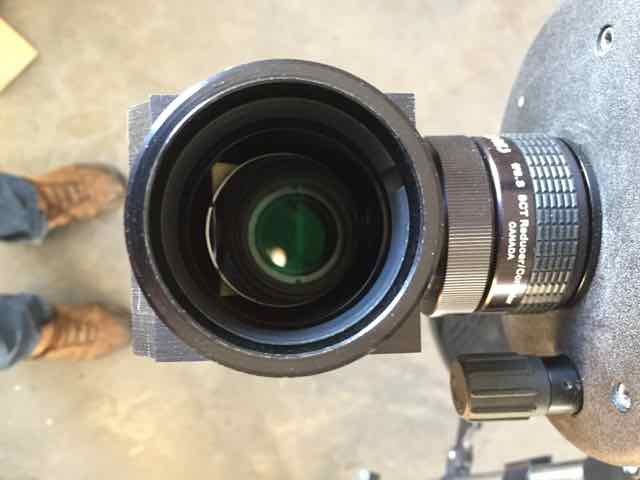 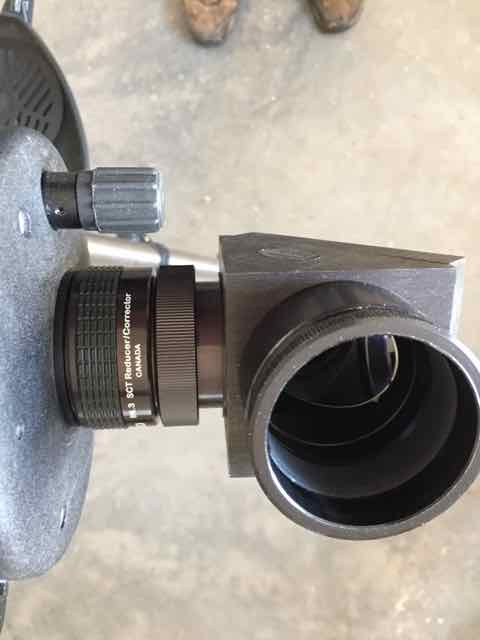 Thanks for the responses. I think I will hold off on the upgrade. I don' t think the Slt mount can handle the increase weight from a 2 inch diagonal and eyepiece.