I'm sure there are numerous threads similar to this, but I've read through several of them and and each one seems to be a bit different. (Just a suggestion to the admins, I wonder if it would be a good idea to create a category under AP specifically for AP-related equipment questions and discussions.)

I've decided I'd like to start looking for a larger refractor (roughly 5-inch) to add to the stable for imaging. So far, my list includes (in order of increasing price):

My target price range is up to around $3k, so realistically, the Stellarvue and the WO are more than I really want to spend, but I could make the investment if there's enough justification. I have NO DOUBT the Stellarvue us a superior scope, but is that quantifiable?

I must admit I'm partial to the appearance of the ES CF scopes, but the weight difference isn't really an issue.

So, a few questions. First, I can't find anything that says what glass is used in the AT, just that it's ED glass. Does anyone know?

Second, what factors are viewed as critical in making a decision about which one to go with? I've read good comments about all these scopes on CN. Since imaging will be its primary use, I read where someone suggested going to AstroBin and searching for images from specific scopes, and, while that sounds like an interesting exercise, my experience is there are many factors involved in how good an image is so that doesn't seem to be objective enough to use as a criteria. I was thinking focuser quality might be a big factor, but on even the lower-cost items in the list (AT and ES), the reports I've read are that the focusers are actually pretty good. It's nice the AT comes with a hard case, but if it means having to completely break down the guide scope, etc. in order to box up the imaging scope, I question how much help that really is. (For my WO-Star 71, I bought a Harbor Freight case with pick-and-pull foam that's big enough to store the scope with the guide scope attached in one unit [I do have to remove the camera]. The WO-Star comes with a soft case, but I would have to remove everything and reposition the mounting rings in order to collapse the dew shield to get it in the factory case.) Unfortunately, I'm not sure Harbor Freight makes a similar case large enough to hold a refractor of this size, unless it's a rifle case, and then I'd be worried about thickness.

Finally, are there any other models I should add to the list to be considered?

Thanks for any information.

The SVX130T would be clearly the class of your list, but is more like $6K, when you get either the FF or FF/FR (which is necessary for AP).  You can save $500 and get the SV focuser instead of the 3.5" FT.  If you get a new SVX, definitely get it with the FF and/or FF/FR at the time of purchase, as you save $200/ea and SV will make sure your exact SVX matches well with the exact FF and/or FF/FR.   I got lucky a few months ago and got a nearly new SVX130T (FT 3.5") with both FF and FF/FR (matched to scope), a couple months after the original buyer decided it was physically too heavy.  It is a very impressive scope, and my G11 handles it easily.  The FT focuser is very nice and getting AF dialed in was a piece of cake with the matching Optec focus motor.  The SVX is a hand built scope in the USA vs. the rest which are Chinese mass produced.

The ES ED127 by all accounts is much better optically than it is mechanically, as ES focusers are not very good.  If you go the ES route definitely go for the FCD-100 glass, as FCD-1 can have CA problems.  You would also want to upgrade the focuser to a FT, and after spending $1K on that, the price does not look nearly as good.  (My 1st scope was an ES ED102CF, and it was beautiful, but it had bad "blue bloating" and the focuser got out of collimation very easily causing arrowhead shaped stars.)

I believe the quality of the AT and WO focusers are considerably better than that of ES, though nowhere near FT or Moonlight.

A lower priced scope to consider would be the SW Esprit 120, which was the runner up for me before I got my SVX130T.  I have had an Esprit 100 for 2+ years, and it is terrific.  I feel the Esprit 100 is one of the best bang/buck scopes for AP, with the Esprit 120 also being a great value.  The Esprit focusers are very beefy, but again they are not at the FT level.  The Esprits come with a dedicated 1.0x FF, and SW has a matching 0.77x FR/FF for the Esprit 120.  The only real downside of the Esprits are that they are tank-like in build and heavier than most scopes of their aperture, but your G11 can handle an Esprit 120 (but I would not put an Esprit 150 on a G11).

Here is a spreadsheet of some refractor alternatives, with prices as well as FoV and Image Scale with a few popular cameras: 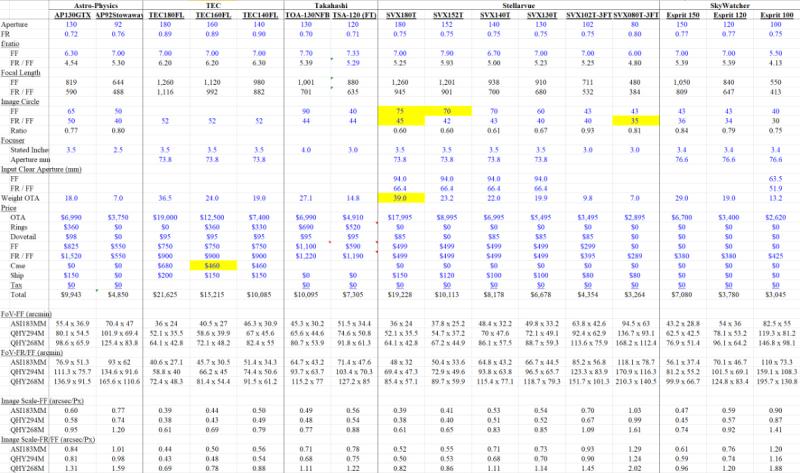 The Esprits are clearly the value end of this list, and are not quite in the same league as the others.  By many accounts the A-P 130GTX is probably the class of the ~5" scopes, but they are unobtainium as new scopes (wait list is closed, and those getting deliveries have waited ~10 years).  TEC has a more reasonable wait, but probably ~ 2 years.

Thanks, Silver. Helpful comments. I really hadn't looked at the SW Esprit series, so I appreciate you bringing them into the discussion. The 120 appears to be a bit heavier than some of the other scopes, but only by a few pounds, so I'm not too concerned about that.

You've echoed some of the comments I've already heard. I've liked the ES models since I saw them on display at WSP a couple of years ago, but I am leery of their focusers, and when you take a $3k+ scope (the CF model is $3400 but I've also heard rumors ES is discontinuing it) and add another $500+ for a quality focuser, you're getting very close to WO territory (the Fluorostar 132 us around $4200). I have little doubt I'd be happy with the WO scope, I was just hoping to not spend quite that much. But, hey, can't take it with you....

I'm, frankly, shocked at the price point of the AT130, and have chatted online with one local (to me) owner who has one and seems to love it, but I keep going back to "you get what you pay for" and wonder if that's really the right choice.

And then there's the whole availability question. So much is not backordered and it's not clear when things will settle out.

Thanks again for your comments.

I can't make an exact comparison between the SV and the WO, but I can make a somewhat informed comparison.

The SV came with both the .8x flattener reducer and the 1.0x flattener.  I bought the Flat68III for the WO.

The WO is prettier.  The finish of the tube is nicer.  The dovetail plate is nicer, I like the rings better.

I think the big question is can I tell a difference in the quality of the images I get form each OTA?  The honest answer is "No, I can't."  They both produce gorgeous, high contrast images with pinpoint, flat stars across the whole frame (full frame sensor).  I think you can be fully confident that each OTA is going to produce amazing photos.

I've picked up the phone and called Stellarvue.  They answered my question and simply chatted with me for a few minutes.

I have a glass report about my Stellarvue telescope.  I know my Strehl ratio is .984.  While the value of this knowledge is somewhat debatable, it is pretty cool!

I don't live too far from Auburn, CA.  There's comfort in knowing I can get in the car and drive to them if necessary.

I can't say any of the above about the WO.

So, why did I get the WO FLT132 instead of the SVX130?  I could order an FLT132 from Agena and receive it in 3 days.  Stellarvue suggested an early next year delivery time for the SVX130.   In the end impatience won out.

I hope this is useful!

Thanks, DCM. I appreciate the insights. I completely understand your impatience, and that extended lead time would certainly be a factor I would weight as well. And, honestly, I'd probably be impatient too, if I could reasonably expect outcomes to be similar.

Thanks for all the info and the great spreadsheet. I am also looking for an upgrade of my refractor.
I am still a beginner and have been doing astro photography for 2 years now. Using a Takahashi DS76DSU and a CEM40. With a ASI1600mm pro. Gave me a lot of fun. But like many I want more.

So I upgraded my mount to a CEM70. Which I hope is adequate for a 5” or even a 6”.
Besides all the refractors that have been discussed I was also looking at the Sharpstar refractors. They have a 130. What is your opinion on that brand? Or is that a complete different (lesser) league?

Today I was at my regular Astro shop and they had a secondhand Esprit 150 at a affordable price of a new Esprit 120. Looked tempting, but I do think that the scope would be too heavy for comfort on a CEM70. What do you think?

The Esprit 150 ota is 29lbs, plus at least 6 lbs for extras, does add up to something like 35lbs and the CEM70 should be able to handle that…. But is this okay for photography?

I would hesitate on an Esprit 150 as a beginner (though w/ 2 years of AP under your belt, you are more intermediate), as it is much bigger, as much the unwieldy length as weight.  The 150 would be much more at home on an EQ8, CEM110, G11T, or AP1100 class mount, though I expect if well balanced with calm conditions, a G11 or CEM70 could work.  But you will have to be much more careful carrying (don't hit the door frame with the long scope) and mounting the scope.

I did come to the same conclusion. I have picked it up and I don't mind the weight that much. But getting a new Losmandy would be a bit over my budget this year.

I am now looking at the Esprit 120 or the Sharpstar 140. Both are lighter and have good reviews.

I am not in hurry and still enjoying the Tak. I just wanted to get some confirmation on the choice to let ES150 go.