It has been quite a while since I have posted an update, and so, also inspired by George's post, I think it is time to write something.

A good starting point may be the frequency of the observations: in the last 11 months, I have gone exactly 7 times to the top of mount Mitchell to observe the Corona. Four of those times occurred in November 2020, then I have gone again one time in spring 2021, and now I have gone again twice so far, in October 2021, the last of which was on the 23rd exactly 11 month after my first observation.
I have been able to observe the Corona every single time I went, and it did take pictures five out of the seven times as well. However, you can see this is a quite infrequent occurrence, the reason being that the sky has to be absolutely pristine, and also that I have to have free time off from work to make it to the mountaintop.

Over this time, I have improved my set up by using a new mount (Advanced Polaris versus new Polaris), upgraded my camera from an IMX249 to an IMX 253 (which is a chip large enough to cover the full frame), I added Hinode solar guider (which I have never brought to the mountaintop because the mount guides well enough for visual), and just recently I have bought a dedicated 5303 A from Andover replacing the rotating tilted filter assembly.

In summary I would say, that based on my experience, observing the Corona is quite tricky but certainly not extremely difficult if you have the right equipment. I do believe that the reason why nobody has done it before is that people have just not tried because they thought it is impossible. And that may have well been true for previous times when super-polished lenses and narrowband filters (I would say you needs below 3 Å) were not readily available. However, now the situation is different and I would encourage anybody who is interested to give it a try.

To show some real pictures in this post, I will show the first results with this new filter from 23 October. However I have to state that the conditions were marginal, and the pictures do not do the performance of the filter justice. I will reserve the full details on the new assembly and its evaluation for a later post when I have data taken during better conditions.

However, here it goes:

This is the raw image is taken on the day. Because of the varying conditions only took a total of two images 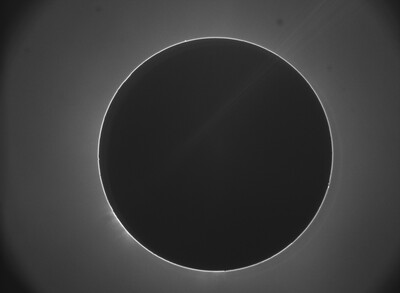 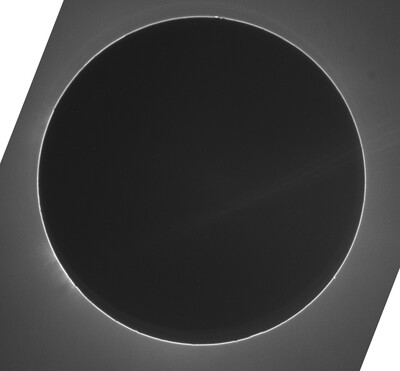 and this is the image with some contrast enhancement. You can see the brighter region and about 8 o'clock in a fainter region and about 10 o'clock. These regions are the same as George has shown it in his post, except the rotation angle is different and the fact that he has not flipped his image. 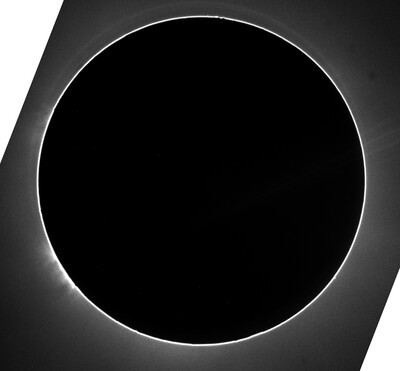 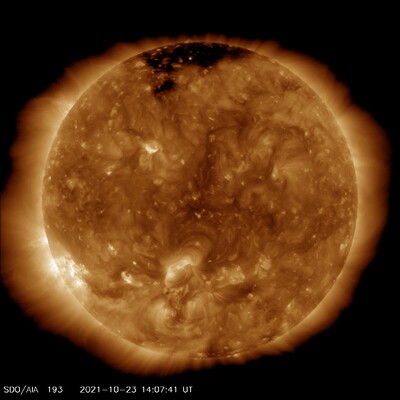 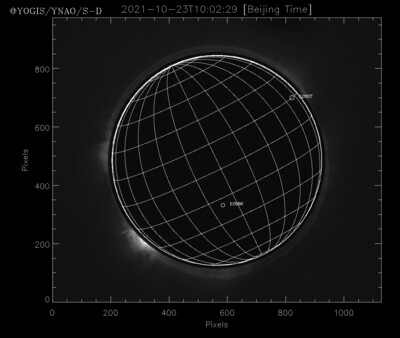 In addition, since I have always taken videos but was unable to post them, I have now created a YouTube channel to show these movies.

From that day, this movie shows the Corona (in that case not rotated), and when I tap the coronagraph, you can see the sun come out top and bottom. Notice how the Corona moves as well when I tap.

The second movie shows high, very faint Cirrus clouds, moving through at first, but then just clearing during the time I took this movie. Because the clouds are bright, the exposure time is lower, but after it clears you can just barely see the Corona at the same location as the previous movie.

You can also check out the other movies on the channel, which is data taken from last November with the rotating assembly. You will see the Corona pop in and out depending on the position of the filter, and if you closely you also see the multiple reflections of the tilted stack move accordingly.

Anyways, that is it for now. I hope to put my new filter assembly through the paces during better conditions soon.
Also, congratulations to George for his successful observation (https://www.cloudyni...ona-from-today/). Maybe that will inspire other people to try, especially since he has shown that a (modified) Baader unit can be used for this.