Yes, it is that star tracker! I did read up before I purchased and there are varying reports from useless to excellent. A good report is in S&T November 2021 where the author reports it sometimes tracked well and other times there was some trailing. Concluded it was only good for wide-angle (24mm) of few seconds or so.

After doing my own tests I agree. Using a 50mm lens to be sure, some tracked well with round stars at 30seconds and others had perceptible trails, even at shorter exposures.

At first, I wondered whether the tracker needed a few minutes run-up for the gears to become fully engaged. But that did not seem to be the case as this trailing would often occur after half-hour running.

Then I figure it must be the balance of the camera on the ball head. Of course, I ensured they were tight-as. But if the camera leans to one side rather than central to the tracker axis there is some tiny amount of slippage causing the trailing.  There are at least three slippage points where the ball joint and camera are attached. that can cause the problem.

I figure we need to have some way of pin locking the position of the joins rather than by presure.

Any thought and suggestions (apart from chucking it)

Subscribing. Can't offer any advice yet, but I did get the MSM this summer to take on backpacking trips, hoping to get some milky way shots in bortle 2 areas I hike. After a night or two of testing it in the yard, I packed my iOptron Skyguider in my hiking backpack.

I haven't given up hope, but I could never get it to not trail, whether from polar alignment (couldn't really figure out a best method to align the laser to the actual tracking axis) or maybe slippage, idk.

In the December Sky and Telescope Alan Dyer's review said the tracking issues appeared random. but I think I may have tracked down the apparently spurious tracking error with the MSM (Move-Shoot-Move) tracker and possible solution.

At first, I mounted a small finderscope 6x25mm to the tracker and came back after five minutes and the target star was still smack on the cross-hair. But when the camera was mounted, the problems returned. After several sessions of shooting at various zooms and directions, I examined the results for when there was trailing and when it was spot on. Turns out (I think) manipulating the more massive camera transmits forces to the gear train causing the gears to shift a bit then taking a minute or two to take up the slack before engaging for proper tracking.

Here are two exposures of Alnilam (eps Ori) cropped to a 1.7-degree field. The first image ("Before") began exposure a few seconds after I took my hands off the camera for a 30-second exposure. You see how the gear train was taking up the slack in slight jumps before it finally engaged at the end of the trails leaving a bright spot synchronizing with diurnal motion which is from the lower right to the upper left. 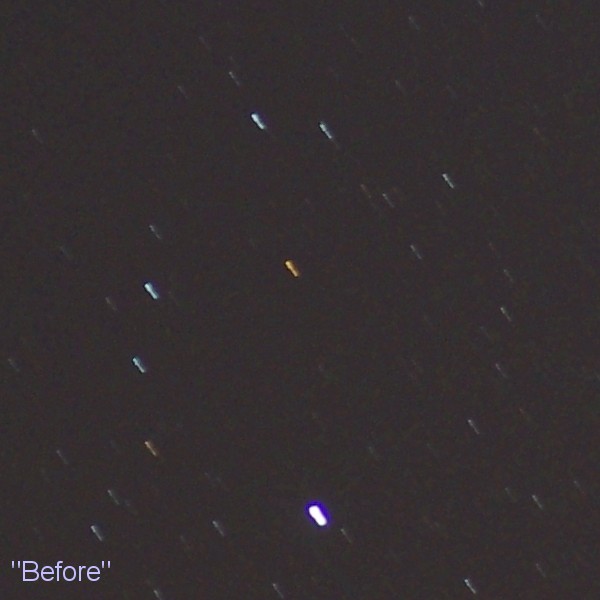 The second exposure ("After")  I allowed the camera and mount 2-minutes to remain undisturbed before exposure started. As you can see tracking is now good. The gear slack appears to have been taken up before exposure began. I have repeated this for other star fields and so far so good. 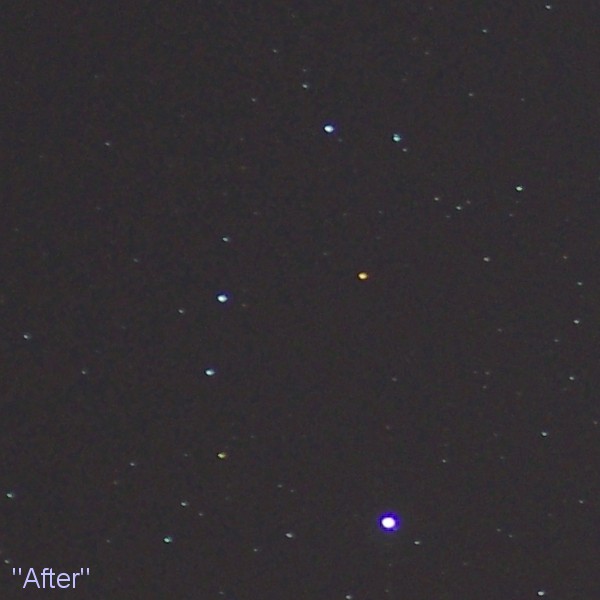 I don't have too much to add at this time...But I will say that I just got through looking at a bunch of shots I had, from a couple of years ago: And shots I took with a homemade (wooden) barn-door tracker look consistently much better, than anything I've taken with The MSM so far... I've been holding out hope that it just needs a long break-in period?