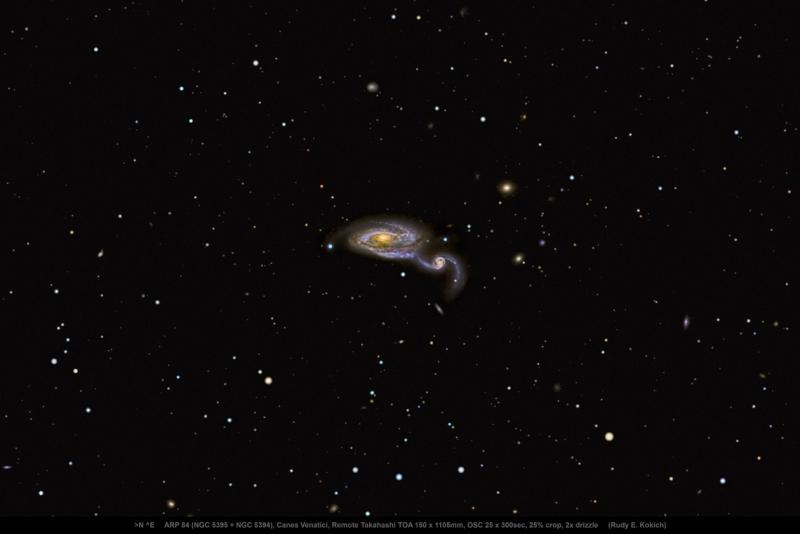 NGC 5395 and NGC 5394 are gravitationally interacting spiral galaxies in the constellation of Canes Venatici, collectively known as the Heron Galaxy.They are also listed as ARP 84 in the Atlas of Peculiar Galaxies which includes examples of unusual structures found among galaxies.  The pair was first documented by W. Herschel in 1787, the same year he discovered two moons of Uranus. As the chart below indicates, the larger member, NGC 5395, is about 3.5 arcmin in angular size, and 11.68 in apparent magnitude (V). Its redshift-based recession velocity is 3,451 km/s, and light travel distance about 160 Mly. From this we can calculate its actual size to be around 160,000 ly - a giant galaxy, 25% larger than the Milky Way, and about 2.5 times brighter. Its morphological classification is SA(s)b pec - a peculiar unbarred spiral. Its NW quadrant appears deformed by gravitational interaction with NGC 5394, which either grazed or passed right through its spiral arms millions of years ago. The interface between the two galaxies has a distinct blue color revealing that the turbulence in the intragalactic medium caused by tidal forces precipitated rapid formation of numerous giant, hot, blue stars. The two galaxies are gravitationally bound, in the early stages of merging, and will eventually form a large lenticular galaxy. NGC 5395 has an active galactic nucleus of the Seyfert II type, indicating the presence of an actively accreting central supermassive black hole. Although the nucleus does not appear especially bright in the visible band, in the infrared it is as bright as the rest of the galaxy.

NGC 5394, the smaller member of the pair, is engaged in a slow cosmic dance with NGC 5395, where a single turn lasts hundreds of millions of years. Measurable properties suggest the galaxy is about 30% smaller than the Milky Way, but also 30% brighter, probably due to starburst activity caused by tidal interactions. Lying at a distance of 159 Mly, it is separated from its partner by only 1 Mly, offering a spectacular view of the night sky to any life forms intelligent enough to appreciate it. This galaxy is classified as a peculiar barred spiral, and also as a Luminous Infrared Galaxy, or a LIRG, which emits more energy in the IR band than all other bands combined. In the optical band, virtually all LIRGs are found to be interacting or merging galaxies with central supermassive black holes (SMBH).  Their high intrinsic luminosity is due to active galactic nuclei (AGN) and also to very high rates of new star formation, between 100 and 3,000 times the rate observed in quiescent spiral galaxies. LIRGs are less prominent in the visible band because their active nuclei are surrounded by dense clouds of gas and dust which absorb intense ultraviolet radiation from the central SMBH, and re-emit the energy in the form of heat in the infrared band.
https://www.cloudyni...diversity-r3265

The field is strewn with numerous distant galaxies, most of which carry no identifier. Properties of the more prominent ones are listed in the chart below. Of these are notable 2MASX J13582258+3734549, which shows what the Milky Way would look like at a distance of 700 Mly, and LEDA 2096860, which may also be a LIRG as it is nearly 15 times brighter in the IR than in the visible band.

The most remote recorded objects by far are two quasars, SDSS J135841.39+373232.3 and SDSS J135859.70+373240.5, whose light is reaching us from the dawn of the Universe. They are respectively 10.9 and 11.2 billion light years distant, and 2,500 and 2,000 times brighter than the Milky Way. When their photons were emitted, the Solar System would not have come into existence for another 6 billion years. But, from the photons' perspective, travelling at the speed of light time does not pass, and their journey was instantaneous. 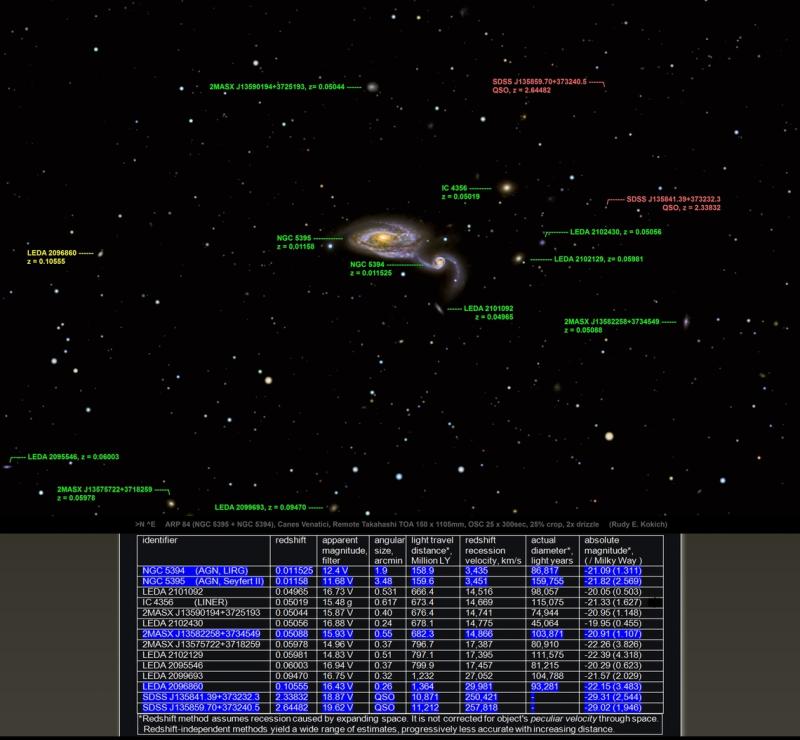 Great resolution on comparatively small objects. Nice color rendition, you've avoided the oversaturated images that seem to be rather overdone as of late. Thanks for sharing!

Thank you SpaceConqueror3 and Lee for encouraging comments.

Very cool, and you are picking up several faint galaxies in the background.

A most excellent image mate!

Fantastic image, great detail and colors.
Even on my mobile phone I can see many background galaxies.
The wealth of background information makes it a pleasure to roam around in this image.
I'd like to try this area as well.

This is an amazing picture 👍


Also tagged with one or more of these keywords: Astrophotography, CCD, CMOS, DSLR, DSO, Imaging, Refractor