Skalnate Plesos turn up on ebay quite a bit.  They're very similar to the Jumbo Pocket Sky Atlas, but sometimes I'll pull it out to plan a session on account of the larger charts.  I bought my color version in 1975, and just because I love old star atlases I picked up the old black on white 1949 version a little while back.  (Actually, it had two "title pages," one from Sky Publishing, and also a 1948 Czech one, so I'm not sure just what their business arrangement was back then.)

I too sort of learned the stars out of Menzel's old Field Guide.  I'd never known that Pasachoff was a student of Menzel's.  I remember buying it because it actually had a full sky photographic atlas, but the size and printing quality sort of limited it's real usefulness.  I still love my old copy though, and pull it out every once in awhile just to reminisce.

I guess Sky must've got the permission for USA publications and been loaned the plates, and shoved a title page in, can't remember if they translated it or not.

USA book and similar copyright used to (probably still does) be unique from world copyright, that's why publishers often had new york and london offices.  And why one of the below books I show is likely a Petersen Field Guide but says Collins, a UK natural history field guide publisher.  They're probably all owned by the same international holding company nowadays.  The Pasachoff one had a UK imprint cover and printed £ price.  I think it has had at least a 3rd edition since my copy.

[This copyright thing has always struck me as ironic, as in the 1800s plays and books were often borrowed from England by the USA, and published and performed there and then copyrighted there by the borrowers, not the owners.  That's why Gilbert and Sullivan started opening their operettas in USA first.  Doubly ironic as it's exactly the sort of thing the USA at least used to complain about with Hong Kong and/or China].

Both Menzel and Pasachoff were Solar Physicists, Menzel a pretty top level one with some ground breaking discoveries.  He was also a space advisor to JFK, and apparently a very instrumental one.  However, when he disagreed colleagues he apparently took it personal, so this could cut off the presiden't ear for said colleagues.

This isn't unique in observational astronomy.  Apparently T J J See, who held a highly influential position, was very similar in this nature.  Except in his case a fair amount of his double star stuff at least was just rubbish with a lot of optical pairs or his further companions to extant pairs being meaningless.

Sometimes it's best to not look at the historical biographies of astronomers, no matter how shallowly, of astronomical legends... ...don't get me started on how Newton used to rubbish folk and tried to destroy the memory of Robert Hooke's work.

ANYWAY, back to the point.  Whatever limitations Menzel's charts had, when his book first appeared in 1962 1964 it must have been glorious for the average and even better equipped observer!  All collated pre-computer days.  In fact in the days of youth I used to use his fascinating nested circles thing for working out where the planets were likely to be.  Nowadays I just look up on clear nights.

I had one of those books. The right one.

I sadly lost it when moving to another house. A Field Guide To The Stars And Planets. Donald H. Menzel. ❤️

I used to have a Peterson's Stars and Planets Guide years ago. It somehow got lost or thrown away when we moved in 2000. I guess I could order another one online.

I also had Peterson's Guide to Stars and Planets. It was what got me started.  I had purchased a worn out 60mm refractor at a garage sale for $5. It had one two element eyepiece, no finder, barely a mount.  But the Peterson Guide said that a 60mm refractor was capable of being used for meaningful observations and that was enough for me.

I used to have a Peterson's Stars and Planets Guide years ago. It somehow got lost or thrown away when we moved in 2000. I guess I could order another one online.

Be careful if you do, as I had a look around, apparently the 2018 printing is the 16th reprint or something and the latest so stuff was updated 'for the next decade' dateswise, plus some other updates, BUT it wasn't numbered as a new edition (still on the 4th edition I think, and cover the same for several reprints).  So you need to ensure you're getting the latest one if you're going for a modern copy full price.  A quick scan did show a few second hand ones going for next to nothing, both of the original Menzel and the Pasachoff ones.

Well said, I too have pulled off the road many times just to look around.

It's not so much the destination, but the journey that matters...

I will typically choose a bright known star and center it in my lowest power eyepiece.

Then I choose the EP that puts another easily identifiable star at the edge. 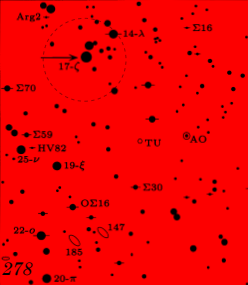 Using this distance as a guide, I now choose my roadmap stars that fall within that reference and start hopping.

That means I use different EPs for each target I'm finding.

I don't plan ahead with circles on an atlas but maybe I'll try that sometime, sounds like fun.