Or... one could use the extra degree of freedom to reduce lateral color: 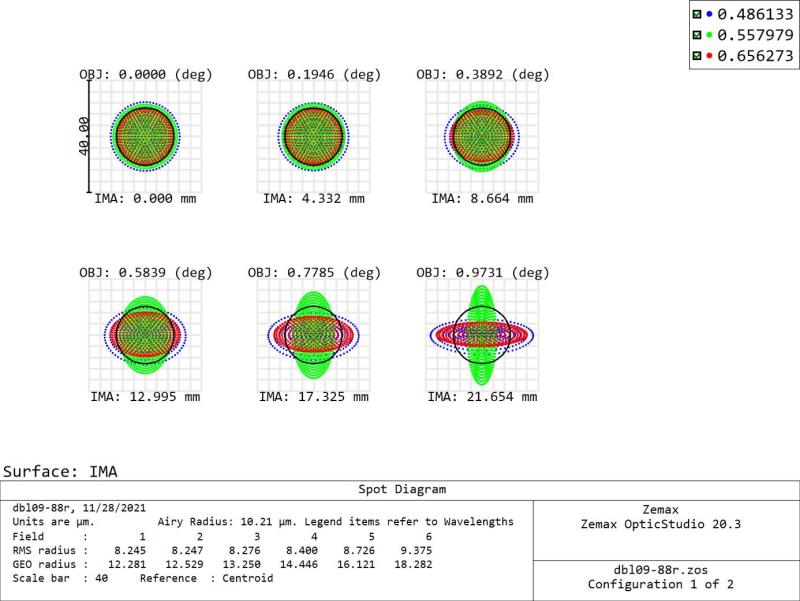 Thanks for those new designs !

Of course, I started a week later than I thought. I'm planing everything with C80 because the crown had deep trenches.

It's very different work from a larger mirror, everything happens fast with the small surface.

For the record, I'm sticking with the following design (Myriam's) :

It seems the most straightforward, and I'm not yet literate enough to assess the others.

I'm keeping a log of everything and will post again when everything has flattened enough to start grinding the curves and wedge is acceptable. That way we'll know how much working time was needed to start with a clean slate !

Have a nice day,
Lucas

The following tests suggest rigour in designing and testing a doublet is not a bad thing but also indicate just how much tolerance there is in small, slow achromats.

R3 and 4 together are relatively concave compared to the Littrow design by around 25 waves which is the difference between R3 of 524 and 520 in your case.

Crown centre thickness is 7mm whilst flint is 5mm.

Spherical aberration in green light looks to be 1/10 wave. 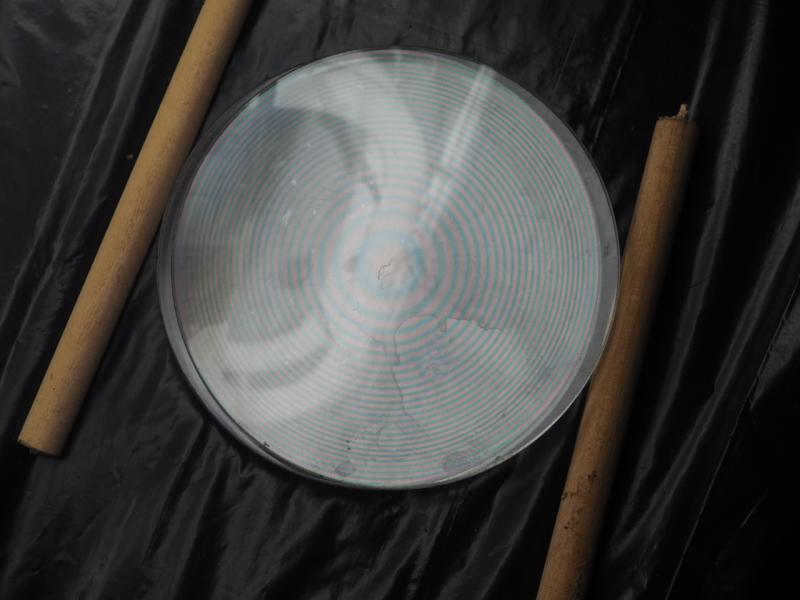 I used a double pass ke null to measure difference in focal lengths using a green filter and 656nm and 404nm laser pointers (on a diffusing screen). I have some 480nm leds but haven't fixed them up with any power.

What surprised me was just how over-corrected my doublet was. Red light focused shorter than green by 11/2mm whilst the longer violet was 18mm further back. It was hard to be precise with the null positions for a number of reasons e.g spherochromatism, laser speckle, lens decentering and misalignment etc.

Oil (n=1.51) spacing the doublet brought the red up the green focus whilst the violet shortened by 3mm.

R4 was then (cedarwood) oiled to the back of a float glass optical flat which pushed the red light focus1mm further than the green with the violet shortening by 5 more mm to around 10mm further on than the green. (Numbers doubled because of double pass).

I'd need to rig up the 480nm source to be sure that it is well corrected.  Re the ref indices of oil and flint I think 3 equal curves and a plane would still be under-corrected.

So, on the one hand it's good practice to keep a closer eye on surface curvature than I did 40 odd years ago but also bear in mind that in actual use CA is almost a non issue in spite of apparent lack of correction.

The advantage of having R3 and R2 slightly different from the point of view of ghosts should be considered unless the objective is oiled which potentially brings a leakage problem.

Thorough is good. Best of fortune with the project.  David

Thank you David for this experience, it's good to know that I have some wiggle room.

I will try to follow the straight path of getting as close to spec as I can since I'm learning with you all as I go and cannot estimate if i'm in the woods or not.

The three glass pieces are chamfered and ground on both their faces "flat" relative to C80, trepan marks are gone.

I will check for wedge and flatten them up to C180 tomorrow and start the real work after.

Never having worked flint glass before, I have been really surprised about how tender it was ! Everything I've read about that was nothing compared to how fast it ground ! Incredible.

Never having worked flint glass before, I have been really surprised about how tender it was ! Everything I've read about that was nothing compared to how fast it ground ! Incredible.

It works the other way when you polish it...takes forever. It also never really takes

the beautiful polish that pyrex or plate glass does, so keep that in mind.

Hello Friends,
Well, I'm still organizing this new home but have started grinding the different radiuses after planing everything.

To avoid problems, I'm trying to bring all my ongoing optics projects to the same grit, with the goal of having a clean room when I start polishing, and not having a grinding project at the same time of a polishing one.

The glass on glass feel is really interesting so far, I had only used tiled tools or a diamond cutting wheel in the case of those 2 big blanks.

Before I get to the precise radiuses on every surface, I have a question : have the designs you gave me been optimized for the absence of coatings ?

Because I intend to bring my mirrors and this doublet to M. Zen in Italia when everything is done, so antireflection coatings on the lenses are totally doable.

I have had a great experience with M. Zen for recoating small mirrors (everything ready 10 days after I sent the package, cost very reasonable, and return shipping lower than return from a french coater to france) and will use his services from now on.

I can't see that coatings would alter the design.  David

The coatings would not alter the design.  To do their antireflection job properly, they need to be within a tiny fraction of a wavelength of uniform thickness over the entire surface.  The tolerances for the radii of curvature of the surfaces are much greater than that.

Thank you for your responses, I maybe phrased my question a bit badly. I thought maybe the design was optimised to avoid unwanted internal reflections and that the use of coatings would allow extra freedom in the design.

But as you can see it's a question from someone who doesn't understand all it takes to design a doublet, and imagines problems here and there.