Or even double triples?

How about a triple double or double triple, they have to be out there.  Anyone?

Or even double triples?

How about a triple double or double triple, they have to be out there.  Anyone?

I will mention my favorite triple double.

I am pretty sure that you have seen it.

The triple double right near Aldeberan !!!

I will mention my favorite triple double.

I am pretty sure that you have seen it.

The triple double right near Aldeberan !!!

Can you be a little more specific than near Aldebaran?  Like designations?

CDSA 2d goes up to quintuples.  Here they are:

The trap can show many more than five stars depending on aperture.  There are countless spectroscopic sextuples that our scopes will never resolve.  At some point (The Pleiades), they become clusters.  But pick any 6 in a glob!

Two "kind of" examples of what you mentioned immediately came to my mind - both in Orion. For a triple double there is Iota Orionis, STF 747, and STF 745 (although Iota is technically a triple.) For a double triple, there is Sigma Orionis and STF 761 (although Sigma is technically a multiple.)

If one starts delving into open clusters or fainter doubles and triples, those kinds of "in field" arrangements are not that rare, but neither are they that remarkable, either, considering the physical parameters involved.

Interesting topic, though. I'll be following the thread to see what other examples are proffered.

Funny that you should ask!!

I am doing a major processing push in my Aquarius list and just happen to come across a very interesting quadruple double star field. If fact, I was going to start a new topic based on this one star field but it seems appropriate that it is presented hear.

A few location notes...start by drawing that line in the sky between Sadalmelik and Sadalsuud, both very fine wide doubles...aka BUP 232 (34 Aqr) and H V 76AB (22 Aqr). Pan to the mid point between these naked eye stars and then head southeast, perpendicular to the line, a distance of approximately 1/10th the distance between 34 & 22 Aqr. Here you should find SCA 102 with reasonable ease if one has dark skies and average seeing. SCA 101 should also resolve without too much effort. That was the easy part. The challenge will be to resolve the close pairing of John Herschel's 945 & 946.

So there you have it...apologizes to our friends from the Isles and further north...this patch of sky may be too close to the horizon for you folks.

Butterfly, I am not looking for quintuples or sextuples.  And certainly not spectroscopic anything.  I'm looking for separate systems that are triple doubles or double triples viewable in a 4 - 6" scope.  STF 761 and STF 762 is a good example of a double triple, thanks!

Thanks VanJan and Chris.  That's the kind of fields I'm looking for.

This is my favorite double-triple due to its uncanny symmetry. 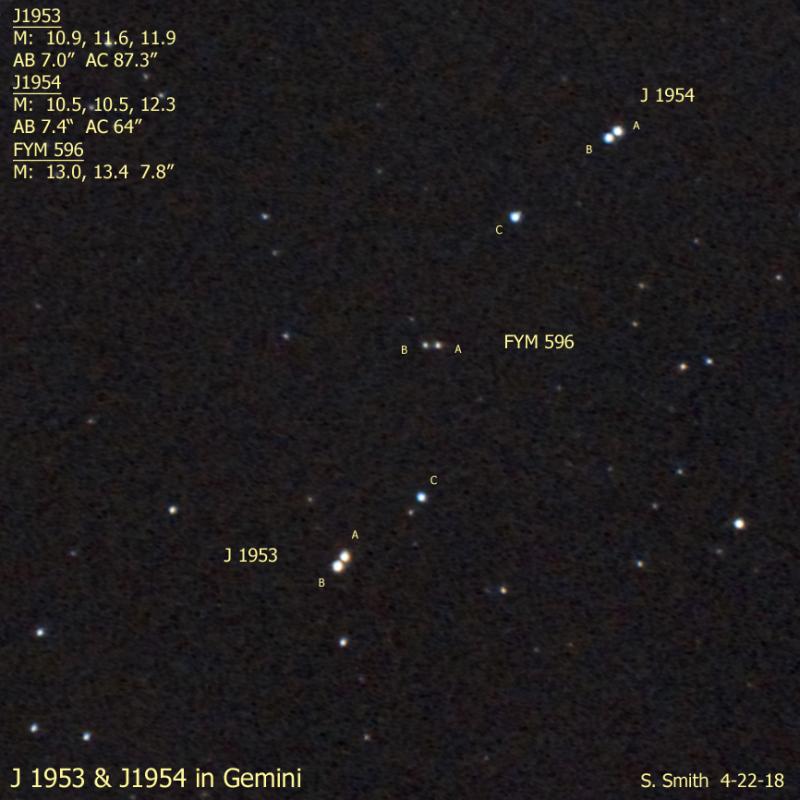 There's STF 740, MZA 17 and A 2107 forming a roughly quarter arcmin sided right angled triangle (almost a 3/4/5 one if you times them by 3), however the last of the three is only 3 arcsecs and has around a 3 mag difference, so might not be valid.

The first two pairs are around 16 arcmin apart and if you can get a field showing around 40 arcmin GRV 228* lies along the same line at another 20 arcmin.

If you can manage a full degree field and still split about 3 arcsec pairs, which I think isn't likely, I can't remember from experience, fairly even mag STF 742 lies nearly 50 arcmin due North of STF 740, so I suppose that'd add up to five for folk capable of both wide field and reasonable magnification, which I've heard some of these more expensive 2" eyepieces can manage.

*That was actually the target I was after, the others were serendipitous.  It was, of course, incredibly dull as targets go, but I decided that having never seen any of those pairs it was about time I started looking at some seeing as it was years and years since I "discovered" the bloody things.  It was never my primary intent as a subject of interest, I just did it to show someone far cleverer than me, but also not a professional scientist, that you can publish in formal journals if you do your stuff right.  But to do that a topic was needed, and it was the only one I had on the back burner I could take to fruition.  A few years later he, and some co-authors, published their much cited magnum opus on RR Lyr stars in the same professional Journal, which made it all worthwhile as an experiment.  It showed it could be done, even though I expected no-one would ever read the thing I wrote, let alone look at any of the "discoveries".

That's a great capture of those two Jonckherre triples...well done!!

Dan...I have two more that I believe are in keeping with the theme. The Orion group for sure...the Cancer grouping is slightly convoluted...a few other pairings buried in the data. From a purely visual perspective for small scopes, I think they work nicely. The Orion group resides at the tip of the dagger. The Cancer grouping can be found smack dab in the middle of M44, the Beehive Cluster.

This is a copy of a post I made to our local forum.   Wrong time of the year for this group now, and well south for most of you Northern observers.   But I still hold that this is the finest tripe double in the sky.

I mentioned this group when discussing the main star in NGC 6193 in the observation report section. It is quite close to NGC 6193 in Ara.

Just north of the 6193 complex, is a small triangle of stars spanning around 0.4 degrees of sky. This group consists of the following double stars

You will need a magnification of around 200x to resolve this group combined with a field of at least 0.4 degree, so a Nagler or Ethos type eyepiece is essential. I have found the best views were through my 132mm CFF at 184x in a 5mm Nagler yielding a .44 degree field. All the stars were distinctly split.

I first noted this group with my AP 130EDT using a 4.8 Nagler (212x). It was a real jiggle to get the three double stars in the field, a little less magnification is to be preferred along with good seeing and excellent optics.

If there is a better triple double, I would really like to know about it.

I will post a star map of this tomorrow, but as I recall it is on page 182 of Uranometria.