Long time lurker, first time poster. I just wanted to share my first set of mostly-decent images with my new quark as well as my thanks to all the active posters on this forum who have provided me with so much information about solar observing and imaging. Constructive criticism welcome. If I can figure out how to link to higher-quality images, I will do that.

Aligned in AS!3 and post-processed in IMPPG.

Your full disc looks ok. How did you get a full disc on a 80mm telescope with a Quark?

I thought that was not possible.

Your higher detail 2nd image looks slightly over processed. Remember, the sun is made of gas! and should naturally be softer. Just my opinion, thats all.

Lovely captures Derek, good job getting that disc out of a Quark setup.

Thanks! Happy to have something to contribute. The full disk just passes in the ST80 (400mm focal length) and then just fits on the sensor after the focal reducer. I had also not seen many full disk quark images before so was sort of surprised that it actually worked out. (Calculated before getting this particular camera).

I was wondering if you could share your focal reducer details, as I have great problems with focusing if I apply a focal reducer.

What is your focal reducer solution - which focal reducer and how do you put it in your imaging train ? Using spacers to get the correct distance between FR and camera sensor ?

I have not had problems reaching focus with the 0.5x focal reducer, but I have only used it after the quark, which has a built in 4.2x amplifier. I am using a 3cm extension after the focal reducer which puts me at about 4cm to the sensor. I believe this particular GSO focal reducer is intended to be used with a 51.5mm spacing, but I did not have that length of extension tube lying around (https://agenaastro.c...cers-guide.html). Per the linked article, this probably puts me at 0.65x. It works, but I will probably play with different spacings in the figure.

For the full disk I am using:

For the higher power I am using

Hope this is helpful.

Your higher detail 2nd image looks slightly over processed. Remember, the sun is made of gas! and should naturally be softer. Just my opinion, thats all.

Derek, thanks for not colorizing or using a negative disc image - they generally make image evaluation difficult.

These are very good first images. However, rather than being over-processed, they instead both are noticeably off-band, with a predominance of dark mottles (aka spicules) that are +/- 0.5 A off the 6562.8 A line.

One of the downsides of the Quark filters is that they vary greatly as to a set temperature and the actual center wavelength (CWL), and you have to "guess" what the correct temperature dial setting is. This is particularly difficult for those new to H-alpha where on versus off-band image subtleties are difficult to differentiate.

Below on the left is Derek's close-up with the 102ED telescope and Quark filter image, on the right is an on-band image made with a pair of Tucson SM90 etalons with an ED100/900 telescope at roughly the same image scale.

Just seeing prominences and filaments is not accurate enough to determine if you are on-band, and learning to judge by the actual observation of active regions, including fibriles, plage, and other subtle chromospheric network features of the disc is IMHO essential.

Note that double stacking* eliminates the need for separate disc and prominence exposures, or the use of a negative disc image to blend the two.

This is exactly the sort of feedback I was hoping for. Black and white images are also better for looking at and processing fluorescence microscopy images, which I do at times for my day-job.

So your assessment is that I am ~0.5A off in my tuning? What I see on your image compared to mine is that the spicules are somewhat elongated and show less variation in intensity from one "cluster" to the other. The lighter areas between clusters of spicules also contain more information in yours.

In the above images, I am +2 clicks clockwise on the quark because, visually, that seemed to produce the most contrast. This should be 0.2A blue shifted. I was likely looking at spicules when tuning so hopefully just my misjudgment about what is on-band. I plan to do a series of images to test tuning, but have a very unreliable clock drive on my CG4 and thought that would be too big a source of variation to do meaningful comparisons. I will try some visual observing to sort it out.

If one goes further off-band, what happens? How large is the range where the spicules are prominent?

BTW, I do have the Solar Astronomy book on which you are an editor and it is a truly fantastic resource.

As you go father off band you admit more light from the photosphere and lose chromosphere details and prominences. The mottles (or rosette structures) are most prominent when seen off-band to the red and blue wings of the H alpha line (Doppler shifted in the image below). On-band they are usually obscured in the "general chromosphere." In some ways they are like prominences in that they appear darker against the disc, and bright when seen against the background of space. 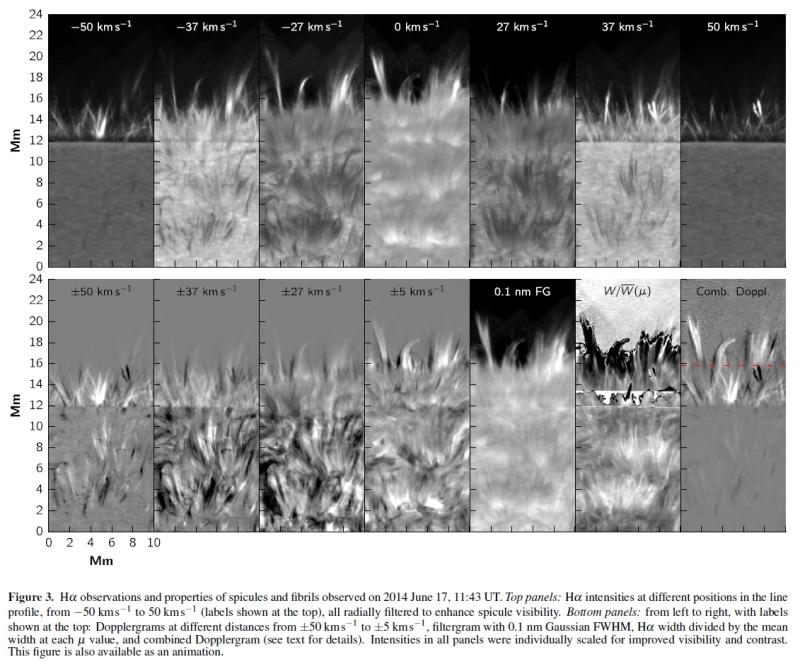 
Also tagged with one or more of these keywords: Solar, Imaging