How do I find or make maps showing where Lunar occultations will be visible from?  Are there any computer applications that can do this?

IOTA has maps, but only for occultations happening soon, not those more than a year or so in advance:

I have the IOTA Occult software installed, but it is slow and buggy on my system.

From the help manual, I figured out how to generate the world map, but unfortunately it doesn't show enough detail.  Neither does In-The-Sky.

On Stellarium, the Lunar Occultation of Mars on December 7 of 2022 (USA Eastern Time) shows as being visible in Pittsburgh (Pennsylvania) but not visible in Cumberland (Maryland).  I could keep trying random locations between Pittsburgh and Cumberland on Stellarium, but a more detailed map would be really helpful.

The option for "View in Google Earth" on Occult does not work.

Okay, what I did instead is "Save Google Maps HTM File" and that worked!!  It looks like Marylanders will have to travel to the Uniontown-Johnstown-Altoona-State College line in Pennsylvania to see this occultation.  I don't know what locations in Western Pennsylvania would be open to the public from 10 PM to 11 PM (USA Eastern Time) in December though to set up a telescope, though this will be visible without a telescope or binocular.

Here's an online application. Allows to zoom in on the 'Occultation Map'. 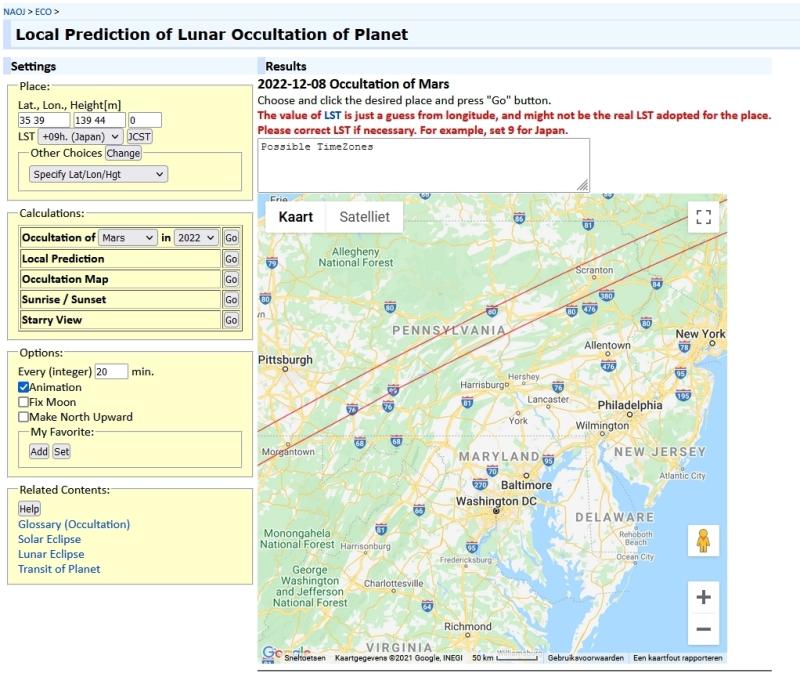 
Also tagged with one or more of these keywords: Moon, Planet