If you don't want to read the whole post, there's a short pros/cons list at the end

For quite a while I've been considering picking up a 1.0x flattener for my GT81. I have the William Optics 6AIII, which is a 0.8x reducer/flattener, and have used it successfully for about a year of imaging.

First, let's go over the build quality and presentation. The flattener comes very nicely and securely packaged in a box with foam inserts to keep it from moving around too much. The flattener itself is in a plastic bag containing those little anti-moisture silicon packets. Pulling the flattener out of it's package, there are two covers. One is a slip-on type over the scope end and the other is a threaded, screw-on type over the camera end. There are some silicone gasket rings around the barrel of the flattener. These serve as part of the "SCA" (self-centering) function of the flattener. More on this later. The camera side is threaded with M42 threads. The SCA is listed as having a 55mm back focus requirement.

Now that we've got the unboxing out of the way... let's talk installation.

Unlike the 6AIII, which threads directly into the GT81, the Hotech is held in place via the 2" eyepiece holder. So, to install, I had to re-attach the visual back (which you remove for the 6AIII). Then, it's simply a matter of sliding the Hotech into the 2" visual adapter and tightening down the 3 thumb screws that secure it in place. Also, I had to use the M42-M48 thread adapter that came with my camera so I could re-attach the camera/filter wheel, extension tubes. That's all there is to it. All in, it probably took 5 minutes to get everything setup. My setup is as follows:

With the setup done and the scope back on the mount, all I needed were some clear skies to test it out. Well... I haven't had much of that. Last night, the skies cleared up for about an hour, so I took advantage just to get things dialed in as much as possible. First up was getting focus. With the 6AIII, the focuser is about 13k steps out (I use a Pegasus FocusCube 2). I had to extend the focuser to about 35k steps - so about half of the maximum extension. Plenty of room remaining, so that's good. Once I had focus relatively dialed in, I polar aligned, then slewed to the south to run the guiding calibration.

After the guiding calibration finished, I ran DarkArchon's filter offset calculator plugin in NINA for the LRGB filters. I'm glad I did because the offsets came back much closer to par focal with the Hotech than they are with the 6AIII. Alright... with that done, I was ready to image. I decided to target M33 for some LRGB subs. I was only able to get a few before the clouds rolled in and ruined the night. However, the few I got were enough to get some idea of how the flattener performs.

First thing I noticed upon examining my subs: the recommended 55mm spacing is a little bit off for my GT81. The Hotech is advertised as working with scopes from f/5 to f/8. My GT81 is f/5.9, so within the range. A quick examination of the subs with PixInsight's aberration inspector script clearly shows stars streaking outwards from center. Thus, I need to increase the spacing between the flattener and my camera. I'm going to need to order some additional spacers. My guess is I'll need to add about 1mm. It's a bit hard to tell how far off the spacing is because of the next point I address: tilt.

The next thing I noticed is the tilt. While the SCA claims to eliminate tilt by it's self-centering design, the reality is not the same as the claim. There is clear tilt. To verify this, I ran a few subs I took last night through SiriL's tilt analysis. There is very clearly tilt in all of the subs. I then looked at some subs I took with my GT81 and 6AIII. Absolutely no tilt at all. I hear what some of you are saying... that because I had to extend the focuser out farther, that's where the tilt is coming from. That's definitely a possibility and I'm not ruling it out. However, the tilt is bad enough that it's very noticeable with my relatively small 4/3 sensor. It would be extremely pronounced on an APS-C sensor like that in the ASI2600 or QHY268.

This is truly unfortunate to see. I'm going to try and play around with the flattener in an attempt to minimize or eliminate the tilt. If I can't, then I'm going to need to get some kind of shim, since the 294 doesn't come with a built-in tilt adapter.

For those of you who stuck around this far (or skipped ahead to the end), here's a quick list of pros and cons:

I'm going to need to spend some more time under the stars with this setup to make a final decision on whether the Hotech will remain part of my imaging train. Right now, the tilt is my biggest issue with the setup. Here are a few pictures showing the spacing/tilt issues. 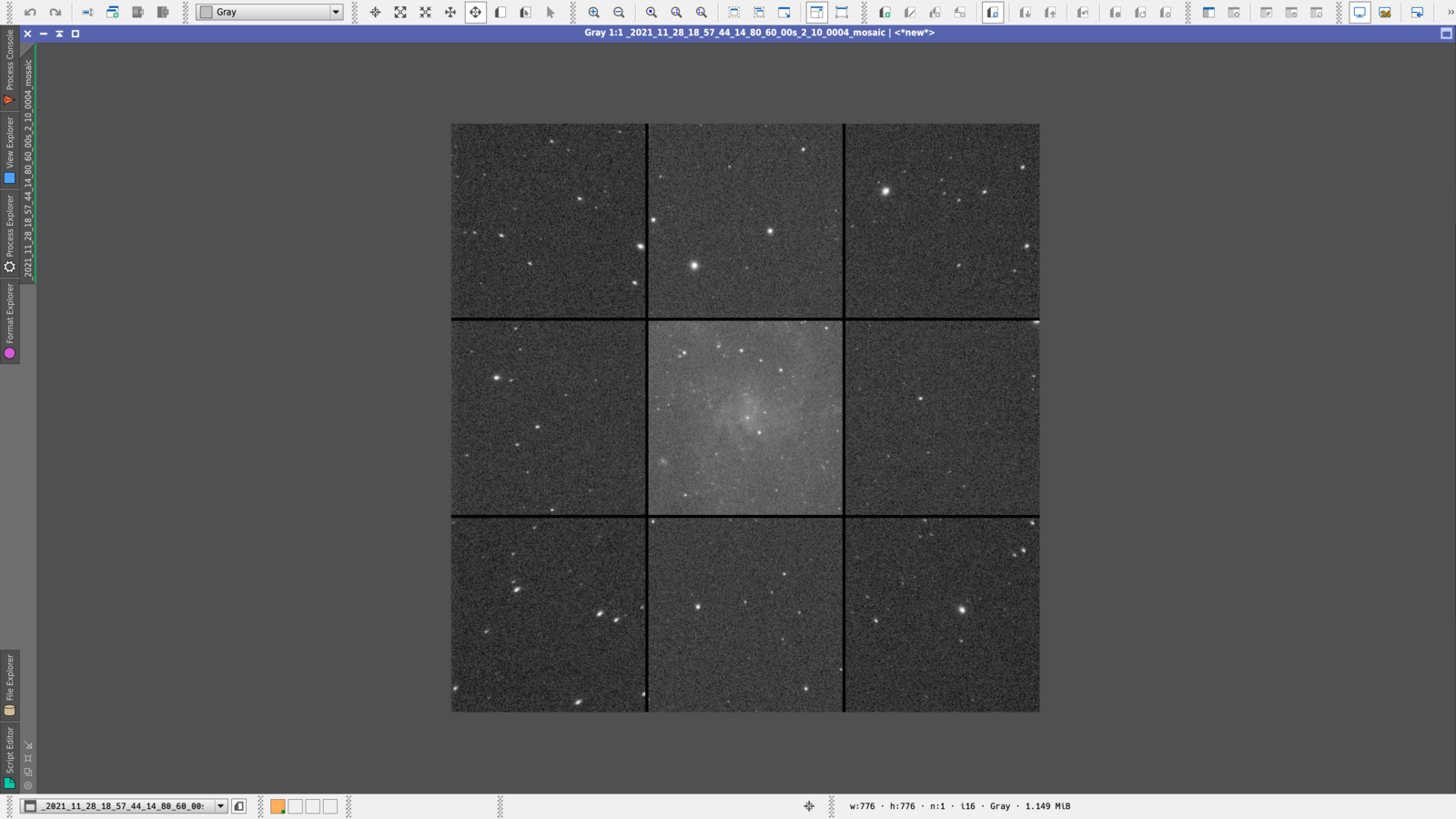 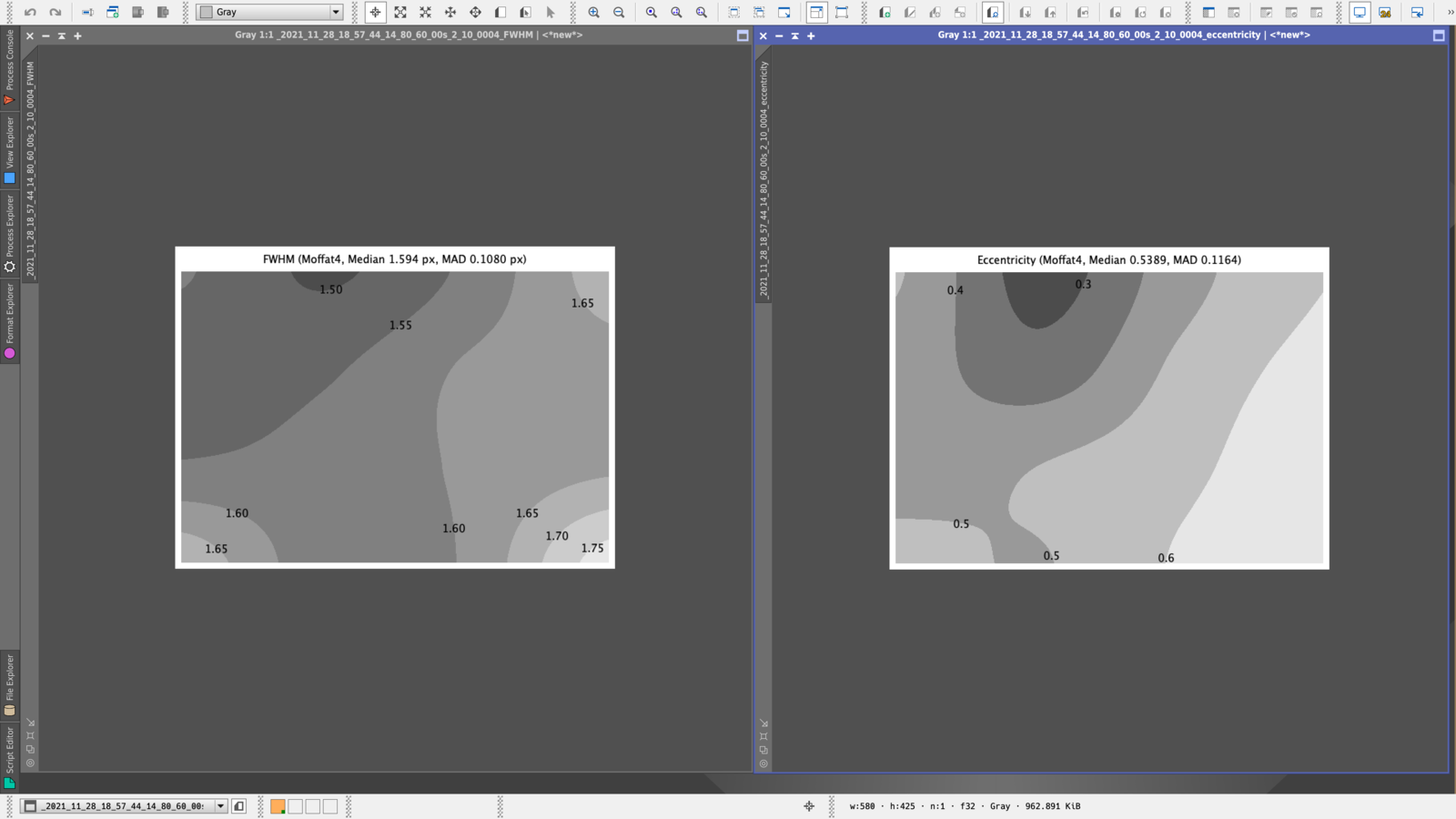 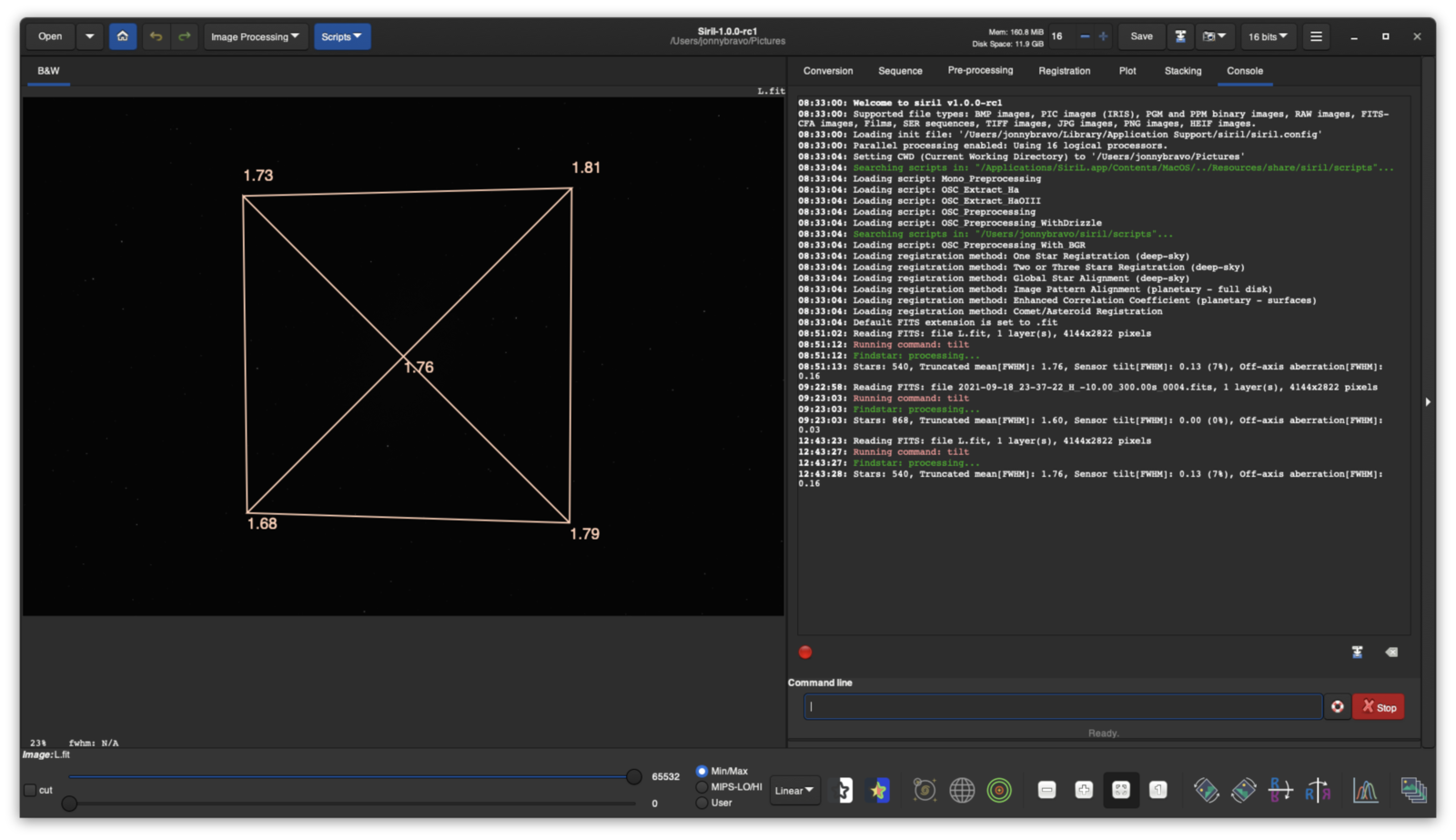 6AIII sub with no tilt: 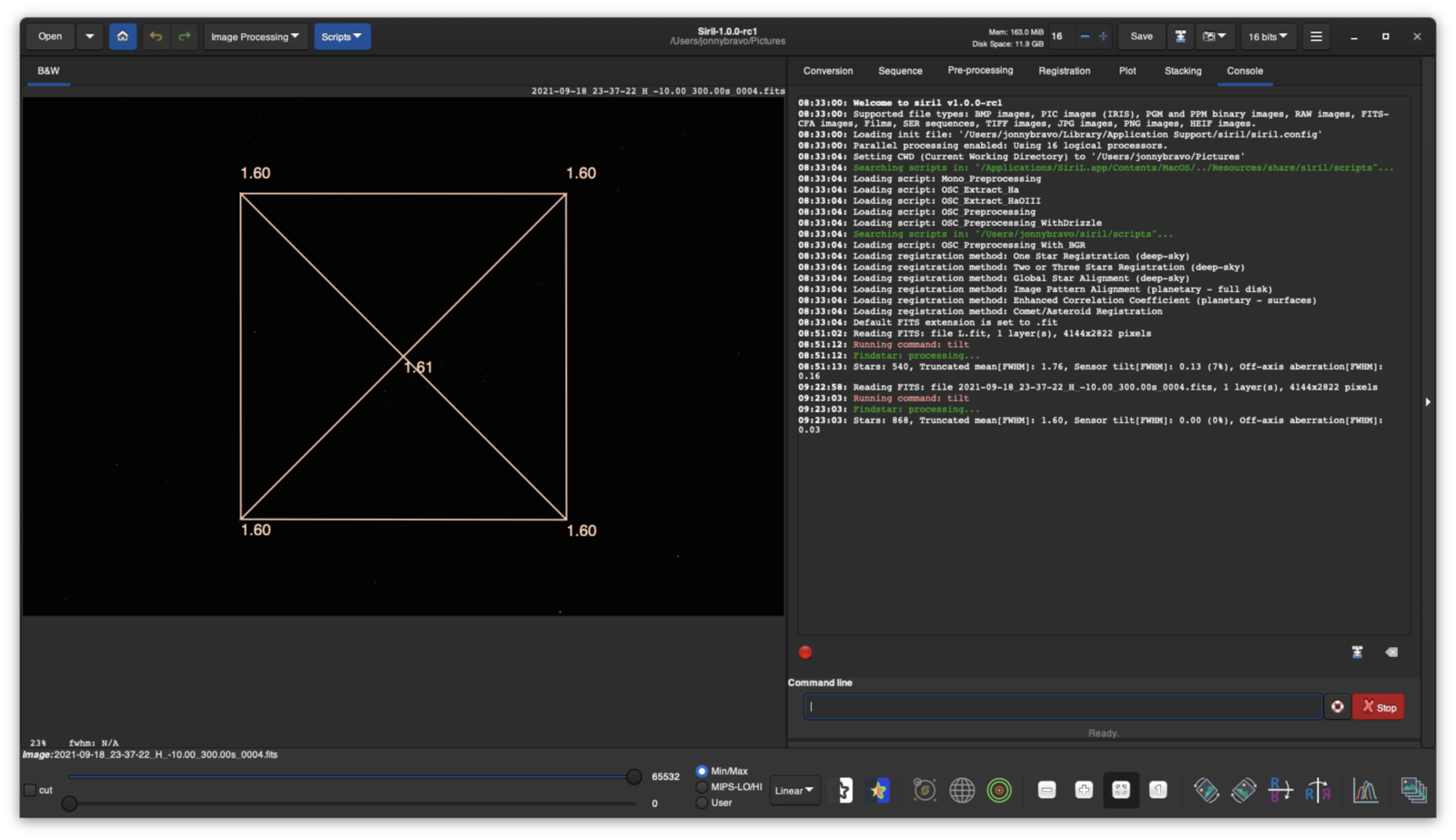 I’m confused about what you are doing to attach the SCA to the telescope. What is the inside diameter of the GT81 focused draw tube to which you attached the 2” visual back? If it is greater than 2” then of course you need the Visual Back to get down to 2 inch diameter. If the ID of the draw tube is 2”, you might be better off not using the VB.

Sorry if I mis-understood your explanation of how you are attaching the SCA flattener to the telescope focuser tube.

It tightens? Huh… I completely missed that. And now I know what that metal knurled ring does LOL. Looks like I did this completely wrong. No wonder I’ve got some tilt. Will have to adjust it to have the rings expand instead if using the thumb screws and compression ring.

Thanks for setting me (and hopefully my imaging train) straight

Following up on this thread. Tonight was the first clear night I've had to test the Hotech after properly installing it (i.e. using the knurled ring). I took the Hotech off my scope, then re-inserted it into the 2" visual back. I used the knurled ring to expand the gaskets until the Hotech was nice and snug.

Unfortunately, I'm still seeing quite a bit of tilt in the system. According to SiriL's analysis of a raw sub from camera, I've got about 13% tilt. This is plainly obvious in the sub when looking at the corners. Stars on the left side are stretched and poorly shaped. Stars on the right look much better.

Here's a screenshot of SiriL's tilt analysis of a sub I took of Andromeda (it's the top panel of a 2 panel mosaic):

Here's a screenshot of the aberration inspector in PI:

Full size images can be seen in my Analysis gallery.

This is a pretty disappointing result. In fact, it's _worse_ than what I got when I had it installed incorrectly. I was really hoping to run the GT81 at its native focal length to get a nice 1"/px image scale using the unlocked mode of my 294MM Pro. I might still be able to salvage this 2 panel mosaic of M31 since I can probably crop away the worst of it on the outskirts of the panels. We'll see.

I will pull my scope inside tomorrow and play with the flattener again to see if there's anything I can do to salvage it. Otherwise, I'm going to be putting the 6AIII back on the scope.

Note - I am not knocking the Hotech Flattener. From what I've been able to tell from the few imaging sessions I had, it does a nice job. I just don't think it's going to work with my GT81. This is due to the focuser tube size of 2.5". Sure, the visual back is 2", but it doesn't extend very far. Therefore, I don't think the SCA actually has enough surface for the rings to properly seal.

Hi Jonny....did you get to the bottom of your tilt problem with the Hotech? I am looking at purchasing your same setup. Cheers...MJ

I have the same set up as you but I must admit I haven't investigated tilt as thoroughly as you have. I use an APS-C sensor, and usually end up cropping the image, so have not noticed it being a major issue. If you have the ability to change the tilt on your sensor could that solve the issue?

I also have this setup, GT81 IV and a Hotech flattener which I've recently purchased.

I wasnt too impressed with the mounting arrangement and its easy to see why.

There are three expanding rings on the flattener but only the first two expand into the visual back and if you tighten the flattener using the knurled ring with moderate pressure the last ring will actually pop out because the internal bore in the VB isnt long enough to retain it.

With the third expansion ring removed to prevent it falling into the OTA (which happened to me), the knurled ring has just enough travel to squash the first two rings into the VB but I wouldn't trust them to hold any significant weight without tilting so I'll also finally tighten the thumb screws for more stability.

I'll give this a try but apart from the above I'm not sure what else I can do now apart from returning it and wondering if Jonny found any alternative solution?

Just for reference, the length of the internal bore on the W.O. VB is approx 24mm.

Please bear in mind that this subject is all relatively new to me.

Following on from my previous post, another option for anyone having problems with the HoTech flattener and GT81, the third rubber ring that doesnt make contact with the visual back can be moved backwards alongside the middle ring so that all three rings are in contact.