Approximately every six years, libration extremes in both latitude and longitude coincide to produce extreme librations that favor specific quadrants of the lunar limb.  Accordingly, I have planned this series of images for the past several years, but of course one cannot plan for the weather.  Although conditions could have been even better, I was fortunate to encounter skies that were just favorable enough to capture these views of Mare Orientale that represent the maximum extent of the region visible from Earth, with both libration to the West and the South being at extreme values.  The first image below was captured on November 27, 2021, and is followed by a cropped version of the image with a few labels added, and then by a Lambert equal area cylindrical projection.  The cylindrical projection provides a striking view of the coverage of the region, although it should be noted that features along the limb are distorted, and so a detailed analysis is best left to the original image.  The dark basalt floor of the interior of Mare Orientale is almost completely visible, and in fact, one can observe the very western terminus of the mare basalt just in front of the mountains that are visible on the extreme limb.  Numerous interesting albedo features are visible on the mare basalt, as well as the crater Maunder, which is difficult to observe under most circumstances.  Finally, the last image shows the same region from November 28, 2021, under a nearly identical libration. 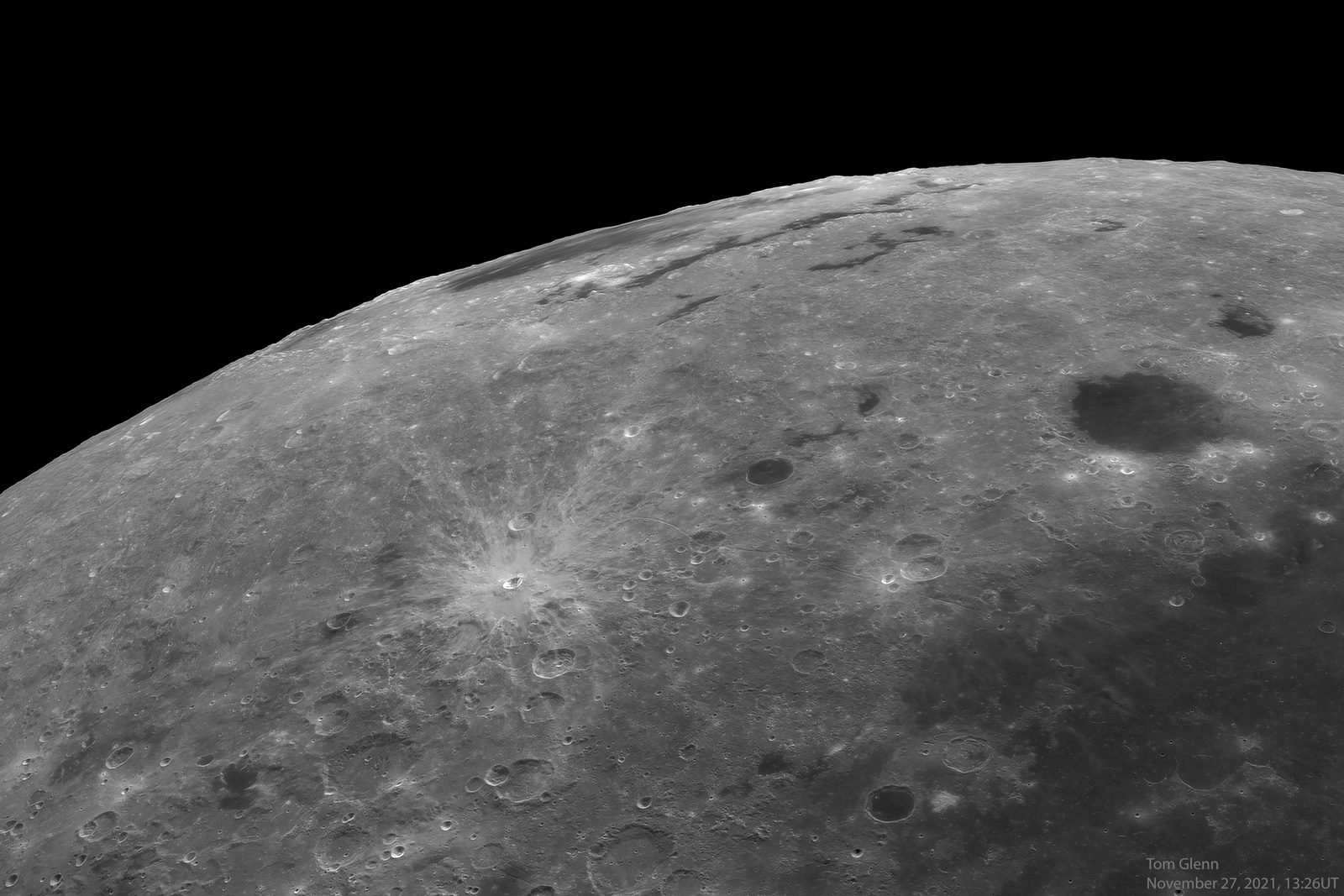 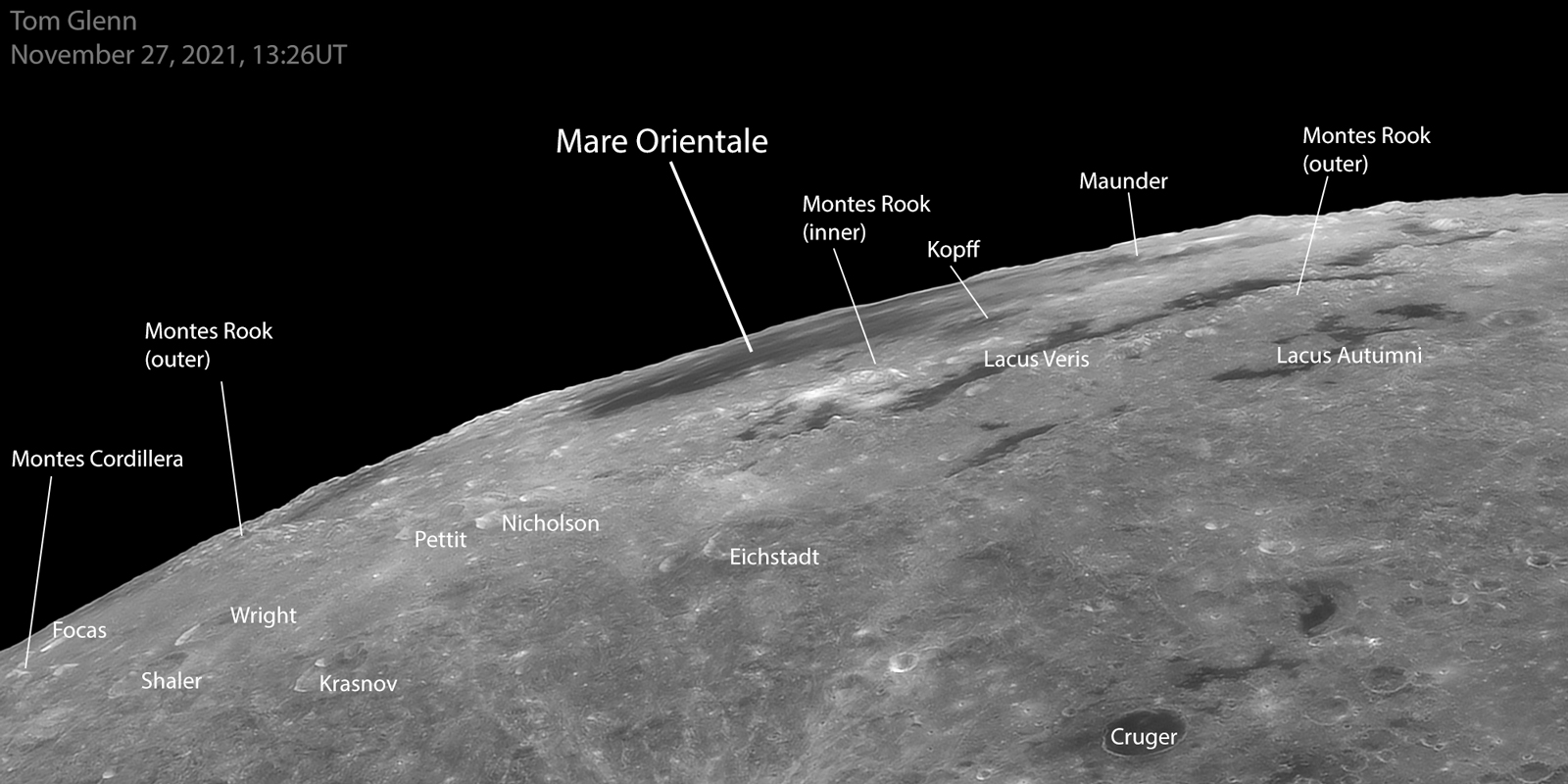 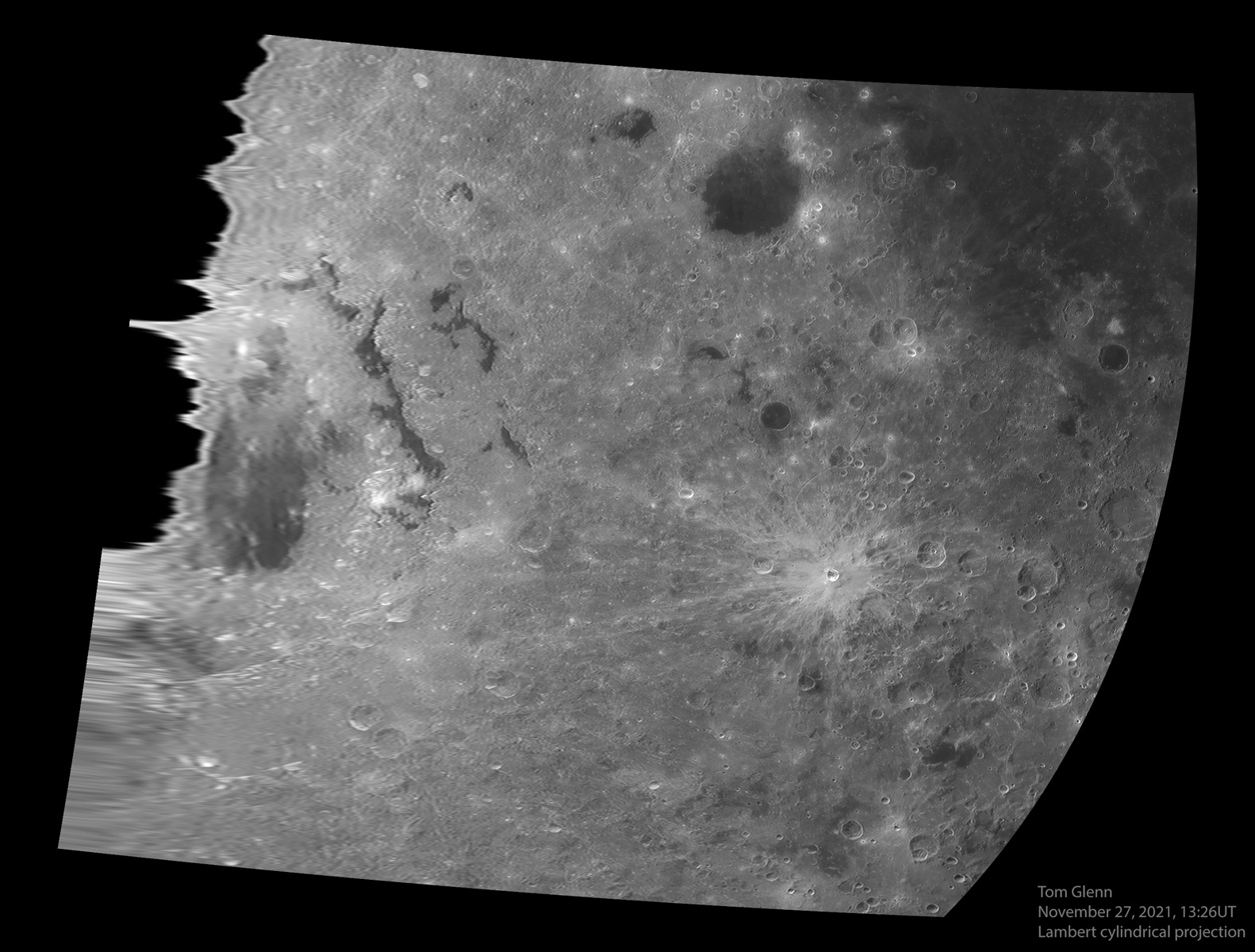 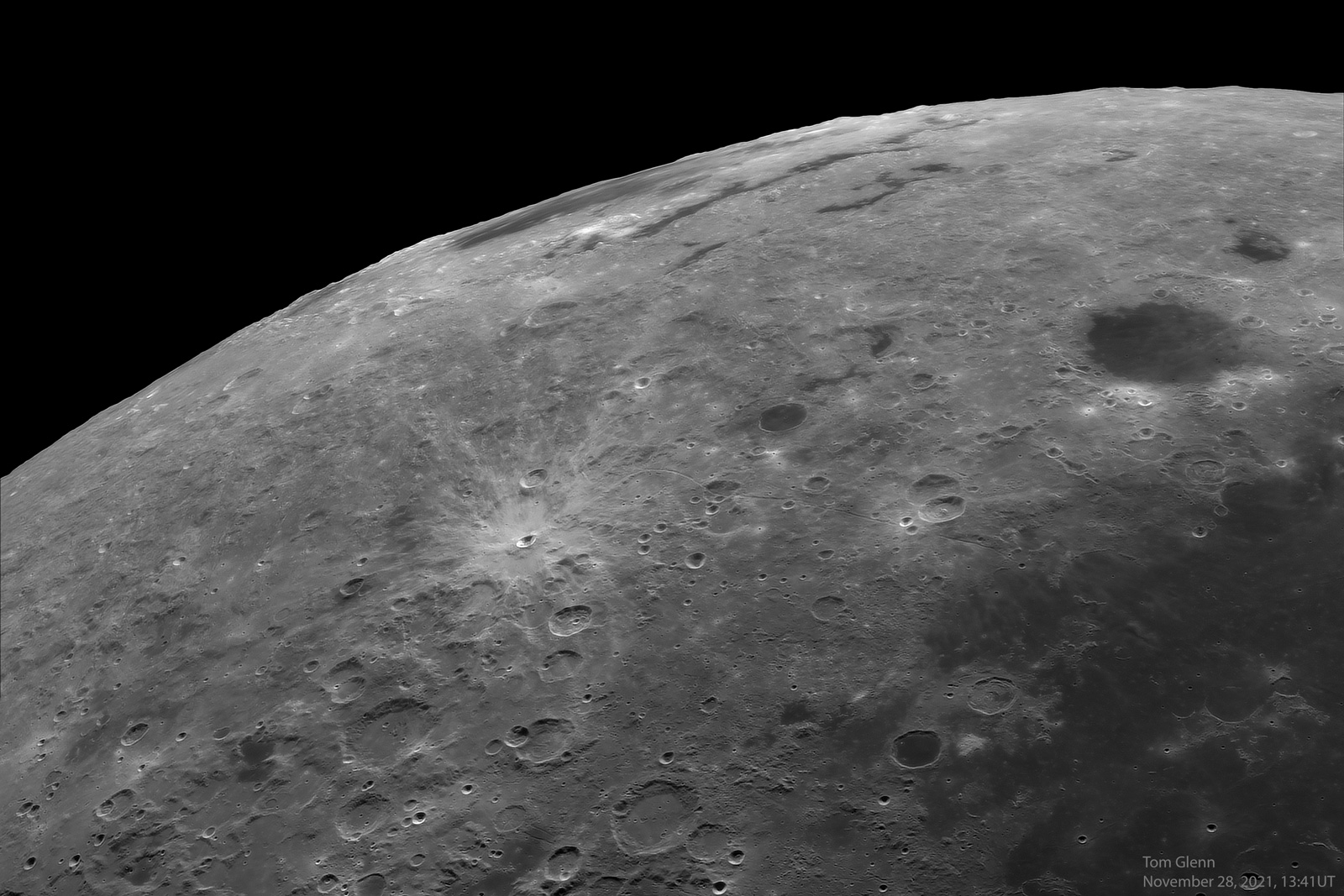 impressive results. very "3d" to see the ridges and mountains.

what focal length and software did you use to process?

impressive results. very "3d" to see the ridges and mountains.

what focal length and software did you use to process?

Thanks.  The images were taken with a C9.25 Edge HD telescope, focal length 2350mm.  The camera used was the ASI183mm, using a 610nm red long pass filter.  Processing was standard stacking of a video file with Autostakkert (500 frames stacked), followed by deconvolution in Astra Image and tonal adjustments in Photoshop.  The cylindrical projection was made using WinJUPOS.

Excellent ! I have the same at home

Truly stunning! I appreciate your generous sharing of this fine example of a rare view of this elusive mare.

Vertical  and near horizontal views helps to gives a better idea of the impact that generated Mare Orientale by showing the "ripples" of Monte Rook plus Cordillera and the beautiful Lacus Autumni and Veri.

Thanks for sharing those very impressive images.

Yes, thanks very much for sharing. Great images of a rarely seen area.

That is an astoundingly sharp image.

Excellent!  I was not keeping track and did not realize we had exceptional conditions a few days ago.  About a year earlier I got this (can't embed the image, so click on the link):

Not as sharp as yours.

Thanks so much for all of the nice comments everyone.  I really appreciate it!

Michael, yes the libration of November 2020 that you captured was also highly favorable, only slightly less so than November 2021 by about 0.5 deg combined effect of latitude and longitude for the Orientale Basin region.

I first became interested in these extreme librations by chance when I happened upon an extreme combination of southern and eastern librations in 2018 (which you can read about here).  I was wondering how often this occurred, and learned many interesting things.  Whereas libration in latitude corresponds to the position of the Moon relative to the orbital nodes (where the lunar orbit crosses the plane of the ecliptic), libration in longitude corresponds to the position of the Moon relative to orbital apogee and perigee.  Therefore, libration in latitude cycles with the draconic month (27.21 days) whereas libration in longitude cycles with the anomalistic month (27.55d).  This slight discrepancy results in the independent cycling of libration in latitude and longitude.  Further complicating matters is the fact that whereas libration in latitude always cycles between +/- 6.8 deg (ignoring diurnal effects), libration in longitude varies from month to month, sometimes reaching as high as +/- 8 deg but other times as low as +/- 5 deg maximum in a given month.  This variation results from a dependence on the magnitude of the apogee and perigee for the month.  Maximum librations in longitude occur each month about a week after apogee and perigee, and the strength of the effect is maximized when the apogee and perigee distances are themselves are maximized or minimized, which depends upon the Earth-Moon-Sun positions.  This arrangement has the interesting consequence of guaranteeing that extreme values in longitudinal librations (up to almost 8 deg) never occur near the Full Moon or the New Moon, and instead favor the Quarter phases.  Note that my 2018 images favoring the eastern limb occurred at First Quarter, and the images in this thread favoring the western limb occurred at Last Quarter.

How often any given libration occurs can be calculated using LTVT (Lunar Terminator Visualization Tool).  The frequency depends upon the stringency of your test.  For my value of 6 year cycles I quoted at the top of the page, I used a strict value of >9.4 deg combined effect in order to determine how often the exact values (or better) would occur as compared to November 27, 2021.  For the search, I used a point within the crater Hohmann Q, which I could detect albedo evidence of near the far western floor of Mare Orientale in my image.  As you can see from the chart below, this region would encounter a >9.4 deg libration during exactly 12 occurrences within 50 years from 2000-2050, beginning in 2003 and occurring in isolated groups of several days and lunations separated by 6 year intervals.  The exact parameters will depend upon your search criteria, but needless to say, the events are rare.  However, you don't need anywhere near this magnitude of libration to see Mare Orientale, but these extreme values are required in order to see to the furthest possible extent.  Although not indicated in the chart below, there is a very favorable libration that occurs later this month around December 25, 2021, and is only about 0.5deg less favorable than my images here.  If you miss it, you will have to wait until June 2026 for the region to reach >8 deg combined libration again, and June 2027 to reach >9 deg, although there will be a handful of other slightly less favorable opportunities available (but not many!). 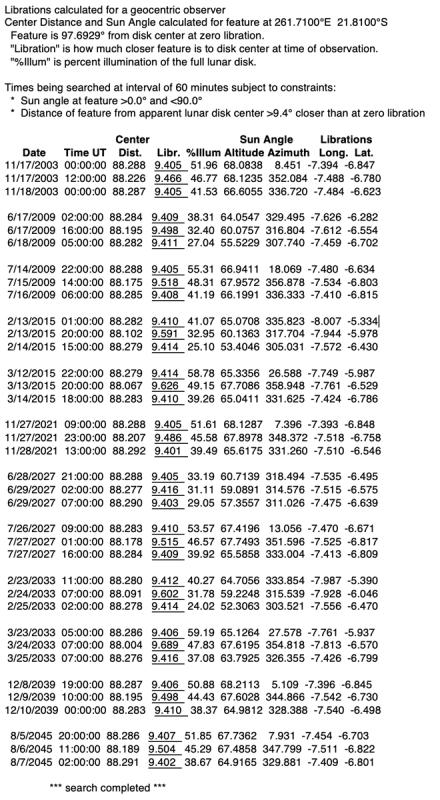 Impressive perspective ! Thanks for sharing.

Several of my images of Mare Orientale that were originally posted here have been included in a very nice article written by Bob King for Sky & Telescope. 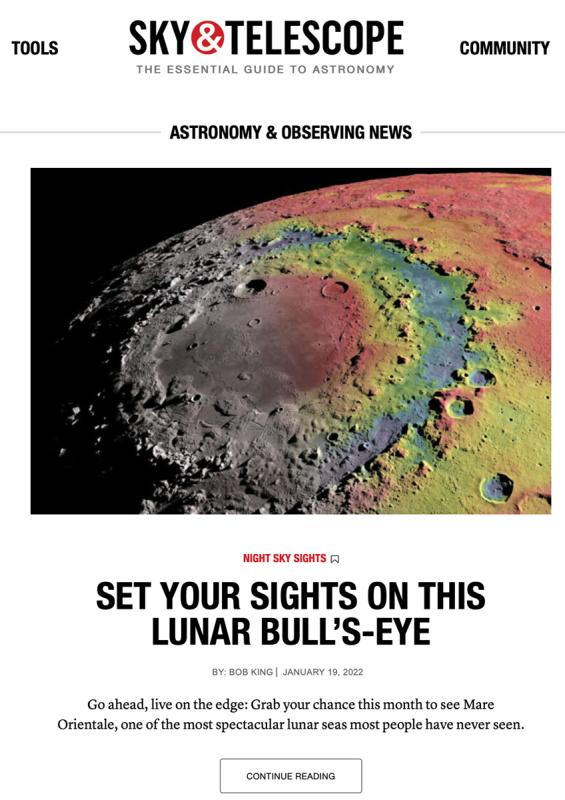 It does look 3d. Very nice. Inspiring actually. If you dont mind, What equipment filters ect took this image.

Cheers for the info. Again love the detail and processing

One interesting aspect that I haven't addressed thus far in the discussion about Mare Orientale is that I have been assuming that most people would want to image the region while illuminated in sunlight.  However, libration is not tied to phase, and so there occur many situations in which libration is favorable, but phase is not.  Interestingly, Mare Orientale is highly amenable to imaging in Earthshine because of its distance from the terminator of the waxing crescent Moon.  I posted this image last year, but I have revisited the data.  This image shows the Earthshine illuminated western limb of the Moon occulting two stars, with the Orientale basin visible, although with only a moderately favorable libration. 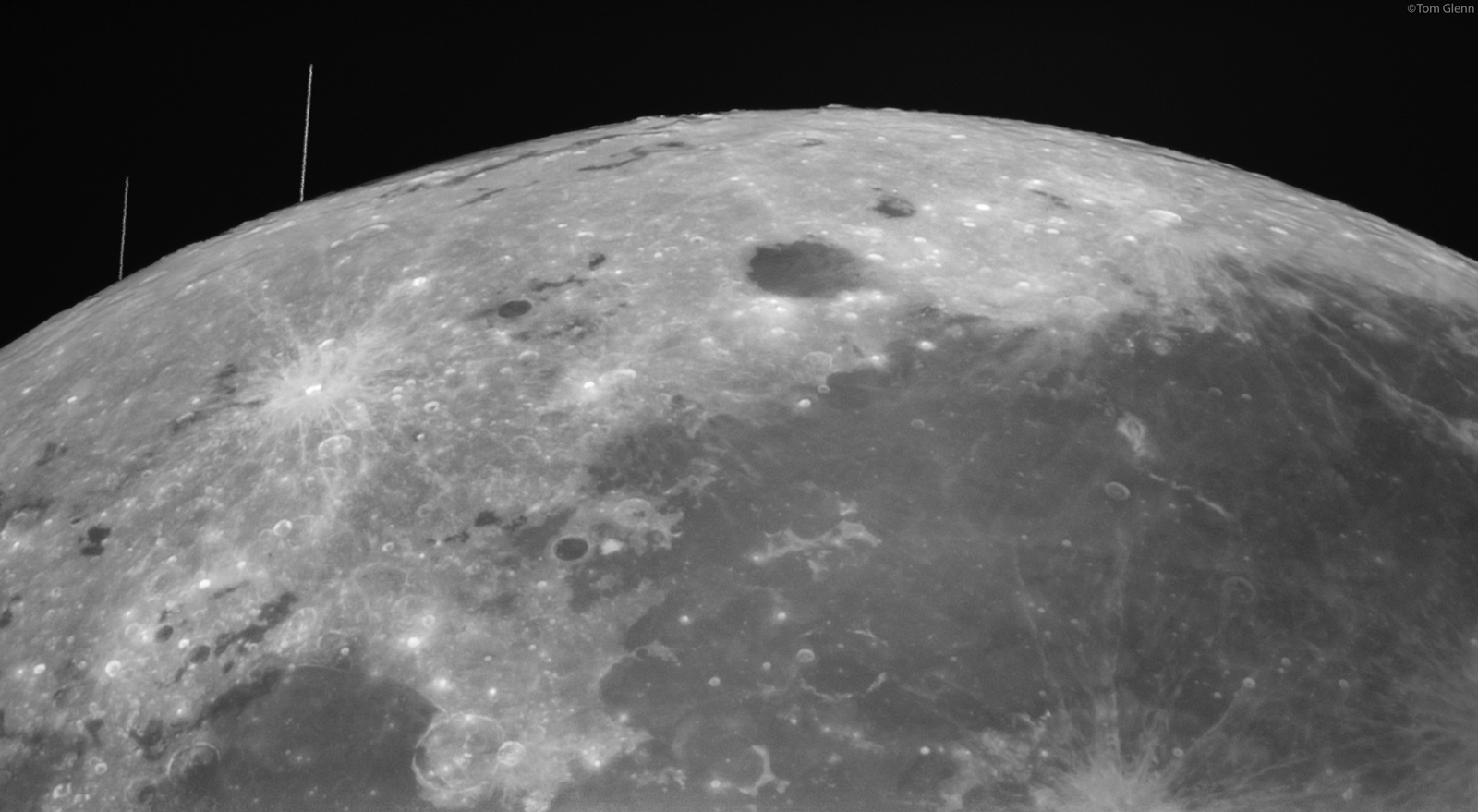