I'm interested in watching the Starlink satellites with binoculars more systematically. I recall learning about satellite watchers from the 1950s and 60s using a small scope that used a small front surface mirror so that the observer could look down like a microscope. I think this way of observing would be more comfortable than bending my head back, especially for longer periods of time. I have great binoculars, but am wondering how I might make a front surface mirror rig. Or maybe someone has such a rig. I've attached a picture from the Adler Planetarium of such an old satellite watcher's scope. I think Edmund Science made them. (Full disclosure, I'm on the American Astronomical Society's committee on light pollution, radio interference and satellite debris. We just put out the SATCON-2 report.)

Thanks.... P.S. If someone has one of these for sale, I'd be interested.

Commercial mirror mounts seem to have disappeared but there are DIY options.  Lots of info on the web.  Mirror wavefront quality was a complaint for some.

I personally didn't like the inverted view that mirrors created, it was disorienting for me, though I'm perfectly comfortable with L-R reversed but upright views through a star diagonal.

A  "box" using two mirrors would provide a correct image but with twice the mirror aberrations.

I bought a mirror mount from Oberwerk.com many years ago and found it difficult to impossible to find anything let alone track a moving object. Have you considered a zero gravity type chair? That's what is used mostly today. That and a parallelogram mount would be much easier to use IMO. Best of luck to you!

Wow! Thanks for the replies so far. I really appreciate them coming so quickly. I'll study these and see what might work best.

I'm less concerned about actually focusing on distinct objects rather than just watching a patch of sky for satellite constellations. Here's my thinking.

The SATCONS that are predicted for the next few years could rise to as many as 40,000. If I have it right, that's as many as there are 8th magnitude stars. Of course they will be brighter during the boost phase, but If they are 8th magnitude when on orbit there will be at least as many as 8th mag stars. My binoculars can go a good bit fainter than 8 in any case.

40,000 is also about the number of square degrees in the sky. So, near twilight there could be as many as 30 of these things swimming in my 6.5 degree FOV binoculars. In fact it might be greater because these things aren't in polar orbits. Even at 10,000 satellites there should be a few per FOV....

I've imaged them in my telescope, but its FOV is much less. The etendue of binoculars is probably the highest for the type of instrument I might have. I figure what I'll try to do is to aim at a given portion of the sky and try to count satellites. Or at least that's my initial thinking. I can get started soon even though the numbers aren't that high because we have predictions that are easily available.

Please correct me if you see any problems with this thinking and make any other suggestions.

Back to the future? https://skyandtelesc...ject-moonwatch/ 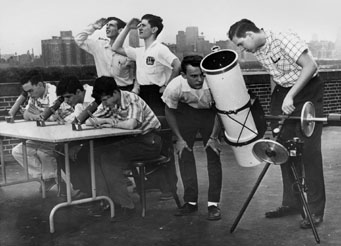 Ready made mirror mounts may be very hard to come by. This question has come up before on the forum. This manufacturer is still making the mirrors and has plans for making the mount. Best of luck to you and your project

Thanks for all the great replies. I especially liked the one with the S&T article. I used to work for the Adler Planetarium and I also know one of the guys in that photo! Richard Horowitz is on the far left at the table. I knew him well and his wife very well when she worked with me at the Adler.

It's also amazing to me the effort that went into glimpsing satellites and getting orbital data those days. Whew!