This evening I was out with my 130mm reflector watching the asteroid 1994 PC1 go zipping up through Fornax into Eridanus. At 7pm, the the Full Moon was 20° up in the east and 47° north of M42, which was 32° up. I have a younger friend who has been able to split the double star Theta1,2 ( θ1,2) Orionis. I, however, haven’t been able to do it under my Bortle Class 2 skies. The reason I always figured is because the Great Orion Nebula completely overpowers the two Thetas. So, with the Full Moon washing out the sky, my 10x50 binoculars showed M42 was merely a soft, faint glow around the two Thetas.

This was the moment I had been meaning to create (by using twilight or bright moonlight) for several years. I walked around to the west side of my house and was able to block the Moon with a chimney while still being able to see Orion. With the naked-eye, I could see three groups of light – one where the two Thetas are, one a bit north inside the currently invisible “Running Man” nebula, and two south inside the open cluster NGC 1980. With carefully study, the two Thetas was strongly elongated vertically and for moments I could split them. 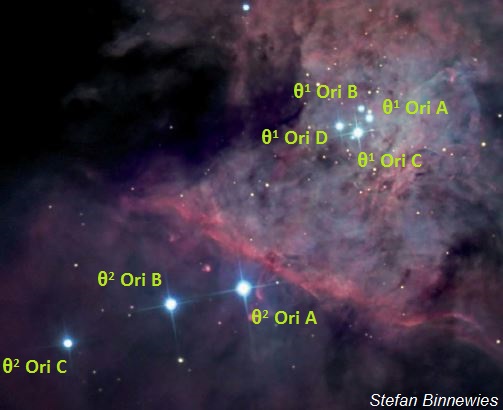 I’ve recently been struck by the Theta 2 line-up in the near field of the Great Nebula & Trapezium viewed in my 6” Mak, and at deeper magnified (~150X) views I’m finding Theta 2 A appears to have a faint companion. Am I imagining this? I’ve scoped all over the web and can’t find an answer. It appears in similar fashion to the E star in the Trap relative to its Theta 1 primary as far as brightness & separation.

If anyone knows or can supply a link to this, I’d be most appreciative!