Let me start out by saying this is not a technical review and conditions did not allow me to do an apples-to-apples comparison. I have been doing astrophotography since the FILM days but I am not an expert on Solar imaging, I am just getting back in since the last cycle.

I have been using a number of cameras with my Coronado 90mm SolarMax “1” Single Stack. My favorite has been the Altair Hypercam 174 and the ZWO ASI-174. I just purchased and received a Player One Apollo-M IMX432. I don’t have the equipment to run both cameras at the same time, nor to autofocus. Additionally, the only day I had to image in the 10-day forecast had poor seeing and clouds. So what good is this post? I have run into some issues and I think some of these experiences may at least be of interest to others.

My primary motivation for purchasing the Apollo-M IMX432 is that it has a deep well and I would like to have a greater dynamic range especially for images with surface features and prominences. My secondary motivation is to allow me to have a camera that can do a full disk image of the sun. My experience processing with the ZWO ASI-174 FAR outweighs my single experience with the Apollo-M IMX432 so the first concept (dynamic range) cannot be determined by my present skill set. I am willing to provide my data via a DropBox link to anyone interested in using my data. Please keep in mind that the same scope and etalon settings were used the sky was changing constantly and I cannot guarantee the exact same focus acuity. I was able to confirm that with my Coronado Solar Max 90mm Single Stack with a 15mm Blocking Filter the ZWO-ASI 174 does NOT give a full disk (see photos) but the Apollo-M IMX432 does with lots of room to spare.

I had some issues getting the Apollo-M IMX432 up and running with FireCapture (more information on this later) and when using a 3x Explore Scientific Barlow I did experience Newton’s Rings (but not without the Barlow, more info later). Once I had the Apollo-M IMX432 I found that I had good FPS but not quite as good as the ZWO-ASI 174. I ran both at MAX RESOLUTION (129fps(ish)/160fps(ish)). In lucky imaging, FPS is a big deal. The Apollo-M IMX432 does present a larger chip so using ROI may perhaps more closely level the playing field but I have to have the opportunity to test this.

Unboxing. The Apollo-M IMX432 comes with a USB-3 cable, a guide cable, a set of hex wrenches for tilt adjustment, and interestingly a lens dust blower bulb. The manual is in digital form. As I do with all of my cameras I immediately installed a IR/UV cut-off filter to help keep dust off of the sensor AR window. My ZWO cameras do not have tilt-adjustment built into the cameras nor did they include the duster. The threads bound up and offered uneven resistance to my IR filters on all of the three ZWO camera nosepieces but were smooth consistent and firm for the Apollo-M IMX432. I acquired the Altair used so I cannot fairly use that as a comparison. Fit and finish is of equal apparent quality with all of the cameras.

Troubleshooting and First Light. After the Apollo-M IMX432 arrived I loaded all of the native and ASCOM drivers from the Player One download page. First I tried the camera with FireCapture and was astonished to see a 5-6 FPS! I had to use ASCOM to connect to the camera as FireCapture newest standard version of the software does not support native PlayerOne drivers. I tried the camera with SharpCap and found it ran at 99FPS full resolution and 200+ with a small ROI. I sent an email to PlayerOne support and posted my problem on the PlayerOne Facebook Group. When I found people on the FB group were using the FireCapture Beta version and it had native driver support I installed the current beta version and got 120-130ish FPS. PlayerOne support did answer my email an hour or so later which was great especially for a Friday night after 6pm. I also found that in 8-bit mode the Apollo-M IMX432 did not produce proper greyscale previews, this was fixed when running in 16-bit mode. This is no issue I assume because you would want 16-bit mode to take advantage of the deepwell/dynamic range. The next morning there was poor seeing, haze and clouds but since this was the best forecast for the foreseeable future I had to take what I could get. As mentioned previously with the direct eyepiece attachment I got a full disk of the sun with plenty of room to spare. I swapped cameras and got a partial disk with the ZWO ASI-174. The ZWO image had better surface features HOWEVER, it was not a fair comparison due to weather and the manual focus under poor conditions. With the image stretched both showed spicules on the limb and prominences.

After adding the 3x Barlow the Apollo-M IMX432 showed Newton’s rings the ZWO ASI-174 does not. I used the camera tilt function and that removed ½ of the rings but because of the declining seeing conditions and the 20 Degree (F) temps, I decided to not work on fine adjustment at this time. The surface details of both cameras seem comparable, I hope to be able to try again under constant viewing conditions.

In conclusion, I cannot yet tell if the Apollo-M IMX432 will offer better images of the sun's surface combined with prominences but now at least I have a full disk option without using a focal reducer. This will help me for not only imaging but also outreach. Even if the deep well/large pixel tradeoff does not pay off the current low price of this camera makes it a keeper at least for me.

Reminder: Not a technical review and imaging conditions changed rapidly. What images I can reduce enough to post in Cloudy Nights are for "entertainment purposes only"

So are these comparison shots?  If so, which camera took which image?

So are these comparison shots?  If so, which camera took which image?

With the image posting restrictions of Cloudy Nights I will need to figure out a way to do it when I get home from work and can play with photoshop.

I didn't see any updates on the Apollo Max... what was the verdict?

I didn't see any updates on the Apollo Max... what was the verdict?

I am mostly using the ZWO and only using the PlayerOne as a secondary or backup camera. The large pixels simply don't give me the image resolution I like.

Gotcha. Re-reading your setup, it seems you were more after full disk imaging which the Apollo Max seems ill fitted too, I'd think that'd be much better for higher mag close ups (I am debating on a camera to use with Quark Gemini with 910mm focal length scope and possibly a bit longer scope as well).

Gotcha. Re-reading your setup, it seems you were more after full disk imaging which the Apollo Max seems ill fitted too, I'd think that'd be much better for higher mag close ups (I am debating on a camera to use with Quark Gemini with 910mm focal length scope and possibly a bit longer scope as well).

The larger sensor lets me do full image but the pixels are too large unless I just want a small image. For close up prom/surface work I certainly want detail and the Player One does not have it. I now use it as a second camera when I run halpha and white light scopes together. 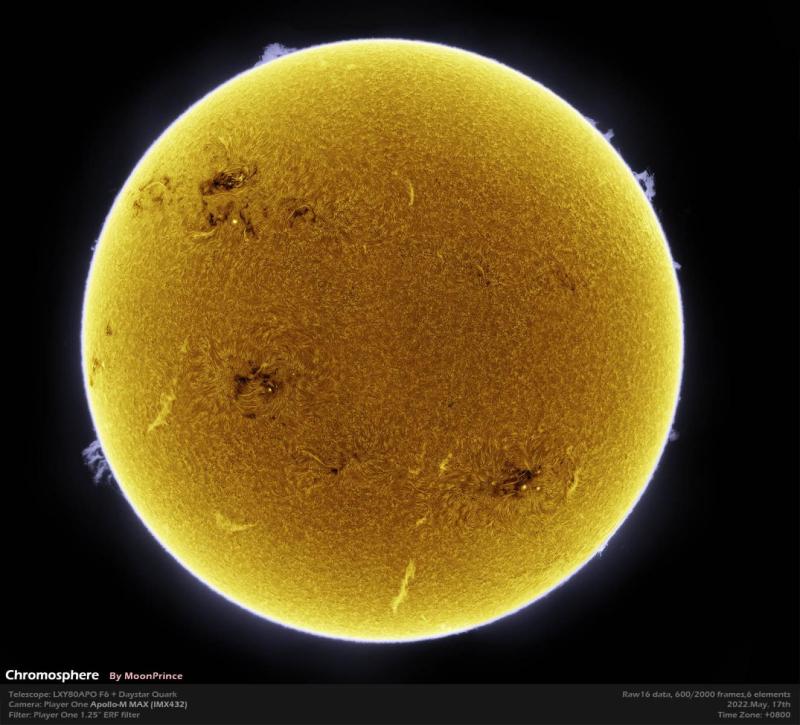 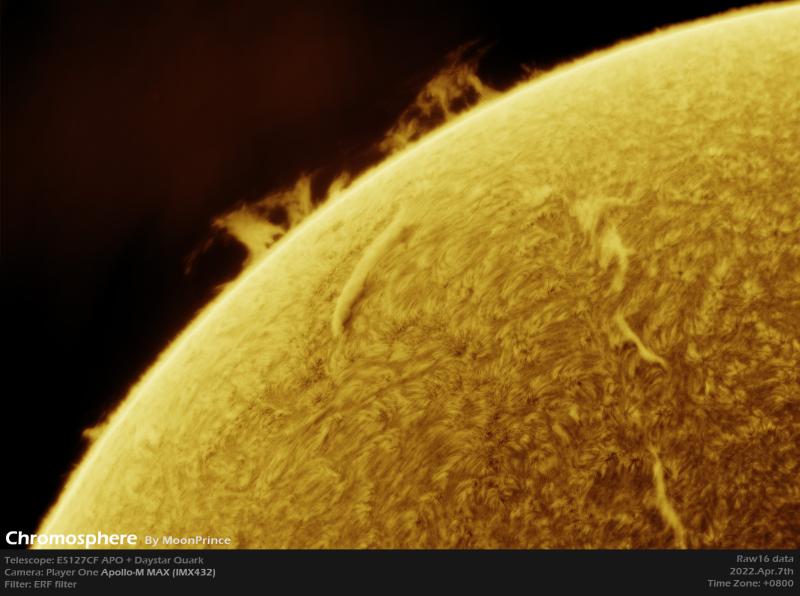