What goes around, comes around: The FOA60Q.

Well, it's been 50+ years since I got my first real telescope, a 60mm model 128 Unitron equatorial. When I was 14, my Spanish class was offering a trip to Spain for those that were interested. I hounded my parents for weeks to let me go (at not unsubstantial cost). They finally gave in and I was going to Spain. Well the day arrived when our money was due for the trip. Over breakfast that morning, I dropped a bombshell. Instead of me going to Spain, how about we use that money (which they had already committed to) and get me that telescope I wanted? My dad said nothing for a moment, and then replyed, are you sure? YES!!! I replyed. His response was " if I ever hear you say that you wish you had gone to Spain, I'm gonna kick your ***" Best decision I ever made. It ultimately led to a 30+ year career in astronomy. Fast forward. I have always had that soft spot for 60mm class refractors, but I never found any of the classics living up to my memories. So this past August, I order a Tak FOA60Q. It finally arrived several weeks ago and I have been able to put it through its paces. I have been absolutely stunned by the cosmetics, performance and image quality. It's deep sky performance has been shocking good. Way above expectation. So after a decades long 60mm hiatus. I finally found the one that fulfills that niche. And it only took 50 years.

You're spot on.  The FOA-60Q is a ton of fun.  Great optics, portable and there's something fun challenging yourself to see things in a different/new way through it's smaller aperture.  It really is surprising what you can see.  Definitely a keeper!  Congrats and hope yours get's lots of use.

Congratulations on the FOA 60…but what happened to the Unitron?

I actually sold it a few years ago. I still have the 142 3" equatorial though.

The Tak FOA 60Q is the future. Great scope

I'm happy for you as I read the enthusiasm in your post. Enjoy the heck out of that fine telescope. I agree completely that a small aperture offers a lot of enjoyment. They really push one's techniques and skills to eek out all it offers.

The FOA-60Q is a fascinating and unique telescope.

The reviews are consistently glowing.

I have not felt an inclination to own a 60mm scope for decades, but the FOA-60Q is clearly a very special design.

A scope that delivers near-perfect optical performance, although it’s a tiny scope —this holds real allure.

The FOA-60Q is a special instrument. I had a couple nights of exceptional seeing with this one during the 2020 Mars opposition and was stunned at the detail I saw. If you add the Takahashi turret, you can take a trip down the Unitron memory lane. 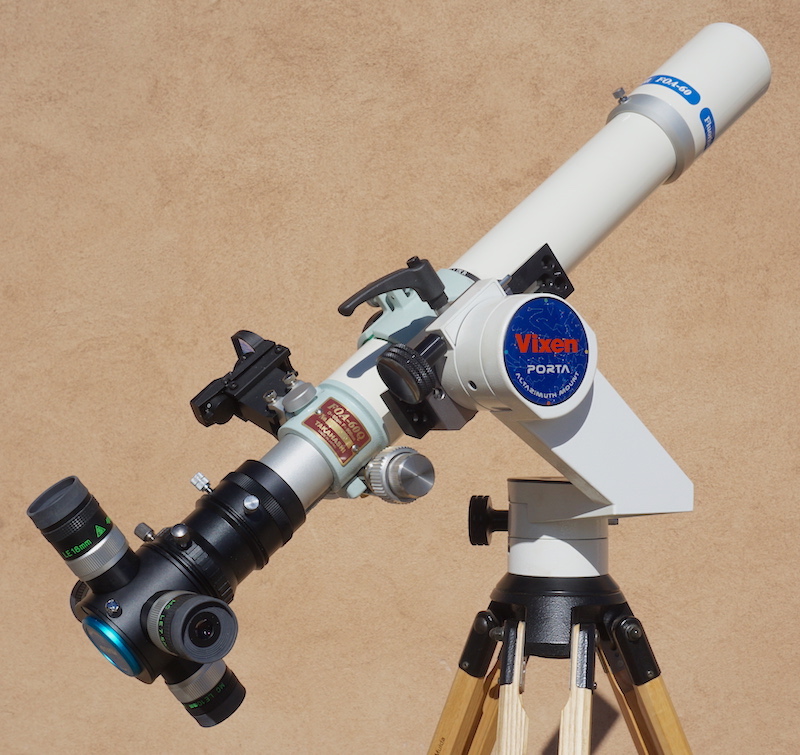 The FOA-60Q is a fascinating and unique telescope.

The reviews are consistently glowing.

I have not felt an inclination to own a 60mm scope for decades, but the FOA-60Q is clearly a very special design.

A scope that delivers near-perfect optical performance, although it’s a tiny scope —this holds real allure.

As long as you don't expect to defy physics in your results, you will not be disappointed. Truly an amazing piece of gear for the level it attains within he constraints of our part of the universe.

The fact that the FOA-60Q has such a classic specification of 60mm and f/15 makes me wonder whether its designer, Mr Yuyama maybe had just such a scope when he was growing up and kept wondering how it would perform if it wasn't just a simple achromat, but instead had "perfect" optics. Years later as Tak's chief optical designer and with an opportunity to create something a bit different that leveraged the latest optical designs and materials, perhaps he came up with the FOA-60Q as a playful nod to the telescopes of his youth.

I get the impression that he and Roland Christen are the kind of people who are always looking for an interesting new challenge that pushes the limits of telescope optics and wouldn't be satisfied just revising the same old designs over and over.