when is it up?

When I have a future target I'd like to see, given its RA and DEC coordinates, how can I find what day of the year it will cross my meridian at midnight?

Search for the object on top

Move the calendar and time on the bottom right.

Yes, that may very well be the best way but I'm hoping for an equation using object coordinates and viewing location rather than scrolling through time.

Yes, that may very well be the best way but I'm hoping for an equation using object coordinates and viewing location rather than scrolling through time.

Right.  That's more a navigation thing.  Words like hour angle and co-latitude come into play, I think.  Usually, it's used backward, you take the time when a star culminates and work out your long and lat, taking your local time and gmt difference.  I used to be able to do this, but I've forgot!  So long ago.

So let's do it simple like, not exact, but approximate, and Northern Hemisphere (else I'll get confused).

0h or Right Ascension CULMINATES (transits the great circle of 0 degrees = 0 h celestial longitude at local midnight) at around the Autumnal Equinox.  So, about 3rd week in September things near 0h RA are getting at their highest at midnight at that time.

12h is third week in March, more strictly the Vernal Equinox.  18h RA at the Summer Solstice or around end of the third week in June, 6h, Winter Solstice, end of third week in December.  I've just checked this in a planetarium, going to 0h, 6h, 12h and 18h and checking the transit times for those rough dates at those positions.

You've 12 months, you can fill in the gaps.  You don't need the exact value (unless this is a homework thing you've got going on here...) because there's going to be moon, or rain, or somebody's birthday party, or something, you need around a week. either side, even a range of a month will do unless the things is quite Southerly for you.

Each month is 4 weeks, so you can get to rough half hours too, as it's 2 hours a month.  You aren't going to observe on the very night at the exact clock strike of midnight.

And this should work for local standard time midnight (adjust for the hour of daylight saving otherwise), I think...  I live in UT land, so not sure.

Ah, but of course it does!  6h RA transits around midnight on the 20th December 2022 (remember, leap years will affect stuff by a day, hence my just saying "end of third week").

And it is, well just a few days past the end of the  third full week in January, but not quite 8h 30m yet, that'll be around the end of the month, call it 8h 20m.

No need for sums and big spreadsheets and looking stuff up, just some cardinal points learnt by rote and then extrapolate at 2h per month past those points.  My targets 8h 20m RA, well, that's more or less tonight then!

Note the Local Sidereal Time will equal the RA of the target object when it is on the meridian.  You just need to find out when the LST = RA at midnight.  An understanding of celestial navigation would certainly help.

Use the simplest tool available: the planisphere. Easy peasy.

Place the object on meridian. Look along the time ring to find midnight. Read the date on the date ring. Done.

That method quickly shows Sirius was on meridian at midnight a week after New Years, Procyon was there then a week ago and M44 will be there then next week. Markarian's chain is in that place/time about March 9. M71's there on or about July 29.

When I have a future target I'd like to see, given its RA and DEC coordinates, how can I find what day of the year it will cross my meridian at midnight?

Find a copy of Jean Meeus "Astronomical Algorithms". What you seek is in there.

Do you want a cookbook formula, or do you want to understand (and possibly derive) how to do this?

Then you need to know that the Sun is by definition precisely at Dec 0 at the moment of the vernal equinox, and very nearly at RA 0:00. It moves a full 24 hours of RA in one year, or 365 1/4 days, so knowing what day of the year the vernal equinox falls on, and what day of the year you're interested in, computing the Sun's RA on the relevant day is simple arithmetic (or elementary algebra at worst).

True local solar midnight is the moment when the Sun anti-culminates -- i.e. is at its lowest. If an object at RA 0 is at its lowest, then an object at RA 12 is at its highest. So on the vernal equinox an object at RA 12 is highest at true local solar midnight. As luck would have it, true solar time is just a few minutes off from local mean solar time in late March -- in other words, the equation of time is near zero. So if you're on the central meridian for your time zone and not on daylight saving time, objects at RA 12 culminate quite close to clock midnight on the vernal equinox.

- the date on which the object cultimnates at midnight is displayed. It accomodates daylight saving time too.

- logic used: figure out the hour angle of the object at midnight today. Find the offset to an hour angle of 24, and determine the number of mean solar days needed to get there, given the 4-minute lead in sidereal time per mean solay day. 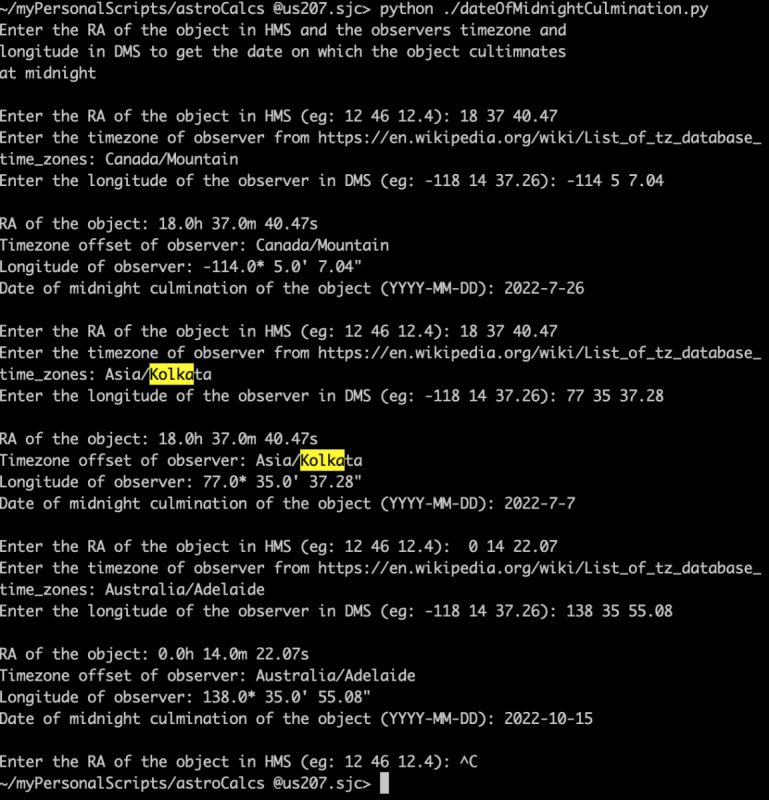 With precession, October 1 is a better estimate for J2000.0, and much easier to do in one's head.

For example, an RA of 5.5h crosses the meridian at about midnight on ... ?

Two hours for every month past Oct 1.  Even hours at the start of the month, odd hours in the middle.  Half hours are about a week.