How Well Do 18mm Ortho Eyepieces Pair with Questars?

I've been half-seriously poking around online in an effort to investigate options for an 18mm orthoscopic eyepiece. So far, these are the options I've seen:

What spurred this was a search for an eyepiece with excellent performance -- very high contrast, no ghost reflections, etc. -- in a 60mm Lunt H-alpha solar scope. Narrow field of view is not a concern since my intended target is the Sun.

I also began wondering how well such an eyepiece would pair with a Questar.

I imagine that the Q's long and rather forgiving focal ratio would make it an ideal instrument to drop an ortho into. I'm particularly drawn to one with a moderate focal length that would sit well between a 24 and 16mm Brandon and that would cooperate with the Questar's internal Barlow lens and perhaps even with the built-in finder system. Lunar observing would be perhaps the best use case for an 18mm ortho.

Does anyone have any experience using orthos in their Questars?

If you're looking for a genuine Abbe orthoscopic design, there are some posts somewhere in the Refractor forum stating that the Starbase orthoscopic eyepieces are Plossl designs. I don't recall how this was determined or how reliable this information is. Takahashi America's product page is silent on the issue, saying only that the design is four elements in two groups.

If you just need an eyepiece which has orthoscopic properties without being a pure Abbe design, this may not be a concern.

(I've never tried my own Tani orthos in my Questar, so I don't have a direct answer to your question.)

I’ve used a University HD 18mm in my Q, which I’ve been told is the same as the KK.  Very sharp.  My favorite for solar in the 18mm range is the 18.2 Delite.  Used it yesterday, and the detail it presented was exceptional.  If you had a chance to observe the sun yesterday, you probably saw a patch of tiny spots near the center of the solar disk.  Well, the view with the Delite was so so detailed that I just stood there with my jaw hanging open.

On the other hand, I have not come to appreciate the Delite for night observing with the Q3.5.  I just can’t quite get it to come to sharp focus in finder mode.  I still use the Brandon’s at night.

One other point I could make, is that the vintage Celestron Silvertop plossls that I own are also exceptional for solar work. The focal length that I don’t own unfortunately, is the 17mm, which is close to your specification.  They are parfocal and work with the Q finder.

I regularly use my two UO 6 and 4mm orthoscopics on my Questar. They provide sharp images and great contrast. The same thing goes for the 18mm Meade ortho and 12.5mm Orion ortho. The FOV is about 50 degrees so that's not bad. One thing that I have not tried is the 18mm ortho with the finder.

Most of the time when I start threads like this, it's out of pure curiosity. But occasionally I do follow through.

A few days ago, I took the plunge on the 18mm Baader Classic Orthoscopic eyepiece, in part, to pair it with my Questar. Here are the critical specs per Agena's product page:

And some photos that compare the 18mm Baader ortho with the 16 and 24mm Questar Brandons: 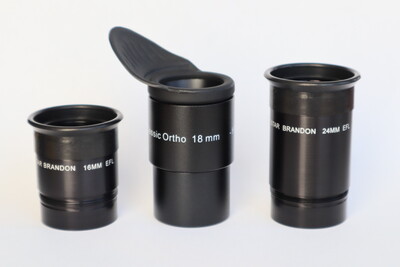 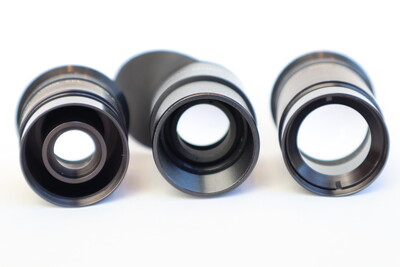 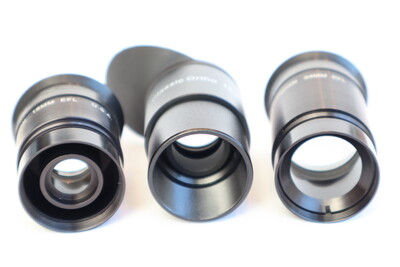 Note the similar color of the coatings: 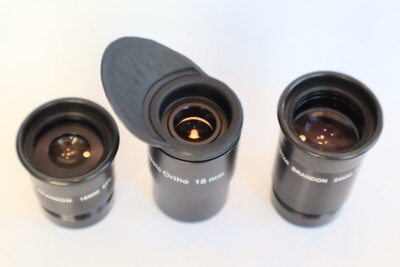 My impressions after spending an evening with this new eyepiece while observing a nearly full moon in the eyepiece under skies with hazy high-level cloud cover that cleared quite significantly as the evening went on.

No barrel undercuts -- yay! The barrel slides into the eyepiece holder nice and smoothly, and the nylon set screws on my Questar diopter eyepiece adapter seat nice and squarely against the barrel.

In finder mode, the eyepiece almost comes to focus for my unaided eye. With my glasses on (I am mildly nearsighted), focus improves somewhat but is still not quite tack sharp. At bottom, it's just fine for finder mode.

The moon was actually quite pleasing to observe in the 18mm Brandon Classic Ortho. There was enough space around the moon’s disk to frame the moon well while still providing a good amount of magnification, which enabled me to see lunar features in good detail.

Since my phone camera cut off part of the field of view when I pointed it into the 18mm Baader ortho, I made a rough simulation of what I saw using the clone stamp tool to make a complete circle: 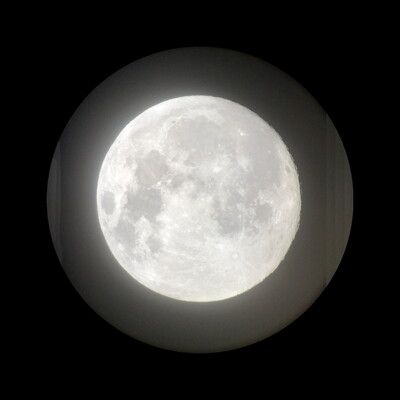 The eyepiece gave me an all-around pleasing view.

The coatings and arrangement of lens elements appear to be doing a decent job with controlling glare and reflections. I saw a slight reflection of the moon off my eye when I moved the moon off to the side of the FOV, which showed more dark space around the lunar disk. Those reflections weren't bad, though.

I saw a breakdown in sharpness maybe a quarter of the way from the field stop to the middle of the FOV. Not bad given that Baader widened the field stop diameter beyond what one normally sees with orthoscopics in order to widen the apparent field of view to 52 degrees. I understand that orthos normally have something like a 40- or 45-degree AFOV.

Yellow fringing was quite pronounced when I positioned the moon's limb so that it was nearly touching the field of view edge: 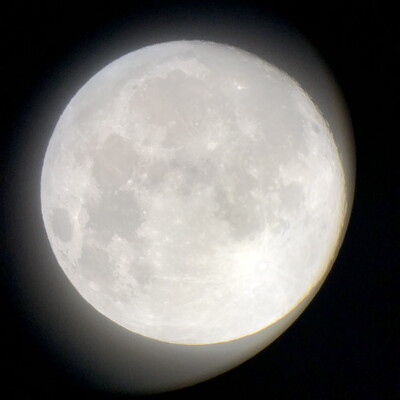 With moon centered in FOV, though, the disk was reasonably sharp at the limb with only a subtle amount of yellow fringing visible at the limb.

With internal Barlow engaged, I saw no change in where I needed to position my eye, though blackouts did increase mildly -- not a lot, just mildly. There was a slight reduction of the FOV similar to what happens when the Barlow is engaged with 24mm Brandon except I have to pull my eye back a bit further with the Brandon than what I have to do with the 18mm Baader ortho. Ghost reflections were really well controlled in the 18mm Baader ortho with Barlow engaged.

Bottom line: based on my initial impressions of this eyepiece, I'd say that, if one were on a budget and were looking for the one perfect modern eyepiece to use with a Questar, I’d say at this early point that one could do a lot worse than the 18mm Baader Classic Ortho. I’m looking forward to more meaningful testing especially when Jupiter and Saturn reappear at a convenient hour.

Just a quick follow up on my prior post: I just came in after having had a look at this evening's 67% illuminated moon, and I found myself using my 18mm Baader ortho most of the time. I had my 24 and 16mm Brandons on hand, and I did use the 16mm to get just a bit closer look at certain features, namely a lovely field of boulders and ejecta that was illuminated just perfectly between Copernicus and the terminator. But I drifted back to the 18mm ortho on more than one occasion.

My sky this evening had a thin layer of off-and-on high-level haze with varying degrees of thickness, so it wasn't the best night to judge contrast. Based on past sessions, however, I do have to say that contrast is one area that I'm finding the Brandons really excel. There is a certain hard-to-describe gut feeling like I'm getting the most pleasing view especially through the 16mm Brandon.

Still, the Baader ortho performed quite nicely with a good level of contrast, albeit not quite at the same level as what the Brandons offer. I'm finding its chief advantage is its magnification. On the moon, I find that that magnification frames the moon in the eyepiece's field of view just right. It offers the right magnification balance and shows lunar detail without putting up an overwhelmingly large lunar disk.

I kind of wish there was such a thing as an 18 or 19mm Brandon. With this discussion thread in mind, I also began wondering about how well a 19mm Panoptic or 18.2mm DeLite would perform.

I’ve tried both the 19 Pan and 18.2 Delite in my Q.  Both are very sharp and nearly identical in performance, except I could not quite get a perfect focus with the the Delite in finder mode.  The Pan was sharp in the finder, but the wider finder field of view deteriorated in sharpness in the outer edges.  I still mostly use the Brandons for the reasons you described above.  The Questar and Brandons are a perfect marriage.  I should add that I sometimes use Delites in a Q7 Astro for star clusters, and for other objects where I want to see the object in context to surrounding field stars.  The 24 mm Brandon is wonderful in then Q7 for deep sky, and the 16 Brandon on the Moon leaves me speechless.

As I've spent more time with my 18mm Baader ortho, I have to say that I've really grown to like that eyepiece especially paired with my Questar.

I find that it offers the perfect amount of magnification for lunar viewing. Without the Barlow engaged, the full lunar disk fits comfortably in the field of view yet provides enough magnification to allow my eye to wonder across the moon and meaningfully take in features. When I want to see particular areas in more detail, I engage the Barlow lens, and I find that my eye placement doesn't really have to change very much if at all. With many other eyepiece-Barlow combos, one has to pull one's eye back significantly, but not with the 18mm Baader ortho.

I find it's a nice middle ground between the 24 and 16mm Brandons in terms of magnifications.

The only downsides are (1) the eyepiece doesn't quite come to focus in finder mode. But I've seen way worse in terms of other eyepieces that are nowhere near coming to focus in finder mode. The 18mm Baader ortho is close enough in terms of enabling me to find brighter objects like Saturn. And (2) edge performance isn't as sharp as with the Brandons. But I don't really find this to be a huge issue either. I understand that the 18mm Baader ortho has a wider field of view (52°) than most other orthos which typically have something like a 45° AFOV. Had Baader stuck with a more traditional orthoscopic eyepiece field of view, I bet that moderate lack of edge sharpness wouldn't be as noticeable.