5 minutes of working the outer zone of the glass against the edge of the rotating lap to improve the grooves followed by 1 minute of long strokes on the stationary lap to keep the centre down. 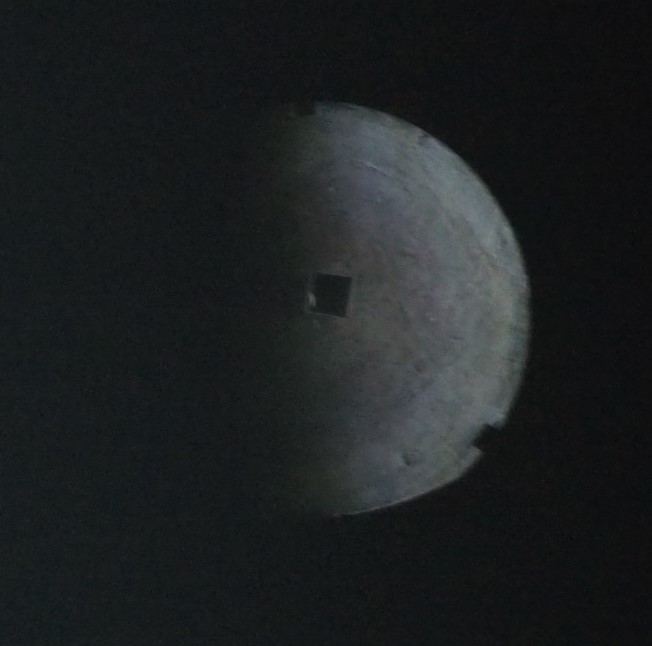 And a frction outside focus. 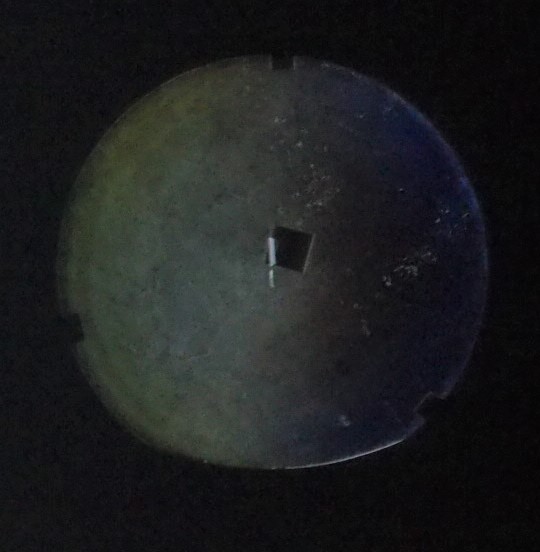 Many of the marks are probably on the marked up and scratched flat but the camera emphasizes any roughness ruthlessly. Some of the shown grooves I couldn't see visually.

Photos taken with Olympus OMD with 45mm portrait lens at f2.2, iso 6400 and 1 sec exposure. Hand held in manual mode with image stabilisation. I use the auto focus with the lights on to find focus before switching to manual.

According to my knife edge travel calculations all of the aperture other than the grooves is within 1/10 wave but I'd like an interferometer reality check on that!

Thank you for all your work!  This has been amazing to watch.  The lens was useless as is, so I am excited to try it out now.

After a couple of extra spells it's much the same; slightly improved grooves but small changes to the figure saying that it's time to stop. I won't make it any better.

I'll send a PM in a couple of days regarding its return.

The doublet will be on its way back in a couple of days so I'm looking forward to seeing how it meaures up.

Overall it's been straightforward although a few things could have been improved and I'd especially avoid the small, local polisher.

As I haven't been able to test under the stars some uncertainties remain.

The colour correction may have been altered with a possible change in spacer thickness and the roc of R3. But this should be adjustable.

Bench tests showed astigmatism but I hope this was due to misalignment with the flat. I only had it propped up so that the reflected spots of light roughly lined up and I think it's sensitive to miscollimation. Similarly, there was a slight decentration.

Nearly all the work was done face down to avoid astig problems but there were 10 minutes face up with the local polisher.

I think that the camera was picking up actual roughness on the glass surface although it didn't show visually. The work rate was steady and the Cerox a fine grade but when I slowed down it got worse, if anything.

I took some ke pics of a 3'' f15 achro that I made 40 years ago which also shows a lumpy texture but performs well.

I'm not too worried about the remaing pits or grooves.

So plenty of question marks. 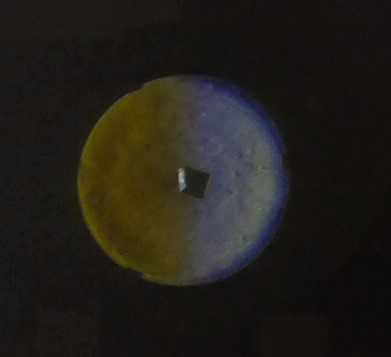 As Jim said the figures for the radii of curvature plus known data for the fluorite and overall focal length should identify the flint glass. I'll work on that and take it over to the ATM forum if I need help.

2nd photo is slightly outside focus

I weighed the flint in air as well as in water using a reasonably accurate balance and got the s.g to be 2.60.

A second set of readings gave:

I'd say it was a hard glass.

Back in post #147, David reported 6.063 inches for R2 (with R3 approximately the same), so I was curious how the values David derived above rounding to 6.1 inches (i.e., only two significant digits) might change using the more precise (but maybe no more accurate) estimate of 6.063 instead:

... so the bottom line here is that such small differences do not make finding matching values from the glass catalog significantly easier, but rather the opposite !

Meanwhile w.r.t. my previous posts #135 and #142, the catalog dispersion for Schott K7 (Nd = 1.5111 and Vd = 60.41) is very far from that suggested by David's lens radii measurements, with either KzFSN2 or KzF5 or similar being much more plausible than K7 ... so I believe at least that question is  settled.

I don't suppose we'll ever know but you'd think Takahashi would be happy to publish details of a historic design. Meanwhile I took a second reading of the s.g, this time reversing the placing of the weights and lens on the beam balance and got the figure of 2.609.

If anyone has more optical glass catalogue details from this period I doubt that the published s.g would be lower than 2.59 or more than 2.62 or that melts varied very much.

It might be worth trying to contact Takahashi Japan to see if they'd be willing to tell you the glass type.

It's also possible that the information is already be out there somewhere, perhaps in a contemporary article on the FC-series in a Japanese astronomy publication or from a later date as part of a history of the company and their development of the first fluorite scopes.