Request for help with Intelliscope Alignment

A combination of hardware and weather problems have limited my time learning to use the Orion XT10i Intelliscope under Bortle 7 skies from the driveway of my condo.  I have not become adept with aligning on two stars within a minute, so my warp factor is likely to be high, if I can even read it before it evaporates.  Without “close enough” alignment, the push-to functionality does not even put me in the ballpark for a targeted object with a 25mm eyepiece.  I have given a lot of thought to how to improve and speed up alignment:
1. Practice!  Practice!  Practice!  Use a digital stopwatch attached to the OTA with a magnet to keep track of my speed.
2. I line up alignment star 1 before turning on the hand controller and point the scope vertical.  Only then do I turn on the hand controller.  I can then scroll to the name of alignment star 1, lower the altitude, and use the crosshairs in the RACF to center the star.  That just leaves one other star to center in these light-polluted skies before time runs out.
3. A tip I picked up in a YouTube video is to defocus before targeting the alignment stars.  An airy disk is easier to center in the eyepiece than the much smaller image of that star.
4. I bought a 12.5mm eyepiece with an illuminated reticle in the hope of more accurate centering of the target star.  Sure, that works, but it takes too much time.  I will stick with 25mm until I get really fast at alignment.
5. Practice on the hand controller to speed up scrolling through the names of the alignment stars.  How I wish I did not have to scroll the list of names twice!  I only have 60 seconds.
6. Learn to use the Realignment function to align on a third object.  I have sent the following questions to Orion Tech Support:
a. Is there any time limit for performing the third alignment?
b. The manual says that accuracy around the third star will be improved at the expense of accuracy around the first two stars.  If I choose the second alignment star for the realignment, how will that affect accuracy?
c. How many times can I perform realignment without have to start from scratch?
d. If I have realigned on the second alignment star, can I then realign on the first star?  What would that do to accuracy?

What is the warp factor you are getting? Usually anything below 1.0 works well enough for me.

I was getting really high warp factors for a while but it was because the hand screws on either side of the scope weren’t tightened enough. I unscrewed them to move the telescope outside in two pieces but I didn’t tighten them enough when I reassembled it. I was getting like a warp number of 25 or higher.

I don't think you have to race thru the alignment. The scope has a clock inside. It will keep track of the time you click the first star. Then it will continuously update the locations of the other stars until you click one of them as the second star.

Do remember to keep the knob on the ALT knob on the back side tight. It is the knob that keeps the encoder locked in place.

Tension for the ALT axis is controlled by the front knob nearest the eyepiece. If you mistakenly loosen the back knob to ajust ALT tension, you will mess up the encoder and have terrible slews.

You may wish to try using a green laser pointer.

It really speeds up the alignment as you can quickly point to your selected stars.

That being said, be safe with it.

...and your centering accuracy is more important than your speed.

so I feel the cross hair eyepiece is worth using.

You may want to try connecting the intelliscope to sky safari and using a tablet or phone interface.

(you need a wi-fi dongle for apple / or a bluetooth unit for android) The sky safari map makes alignment more visual and the push to interactive experience is fun.  I feel like the alignments using sky safari interfaced are more accurate than using the hand control. Perhaps because the exact time and latitude/longitude data is used?

The best you can expect a system like this to perform is within spec.  According to Orion Tech Support, my system is operating within spec:

Any discrepancies beyond that are due to operator error.  Others have waxed eloquent on the need for a low warp factor (0.5 or less) and what you need to do to to get that.  Slower results in a higher warp factor.  Everything I have seen or heard indicates a time under 60 seconds is an upper limit.

Ok, I am probably way under the 60 seconds due to using the GLP and the SS interface.

If speed is a big factor, the combination of GLP and

Use laser as you get close.  Align star 2,    Confirm the alignment.  Done.

And you can pick identifiable stars to align on that are not in the HC list.

You don't get a warp number.

If alignment is off, you can re-align on objects as you go - up to ten objects.

Sky safari tracks the sky movement in real time, and it knows the scope position as soon as you align the first star. So timing shouldn't be an issue in SS, as it could be in the Orion HC..

Also there are other reasons for a bad warp.

Alignment stars that are too close together.

Alignment stars that are too low or too high (atmospheric distortions)

I don't think you have to race thru the alignment. The scope has a clock inside. It will keep track of the time you click the first star. Then it will continuously update the locations of the other stars until you click one of them as the second star.

I'm actually not sure it does this/is this advanced, either way unless you take several minutes it shouldn't prevent you from getting decent success, as mentioned, be thorough don't rush.

But maybe first, did you do an encoder test yet? If not, do so and check for anomalies. 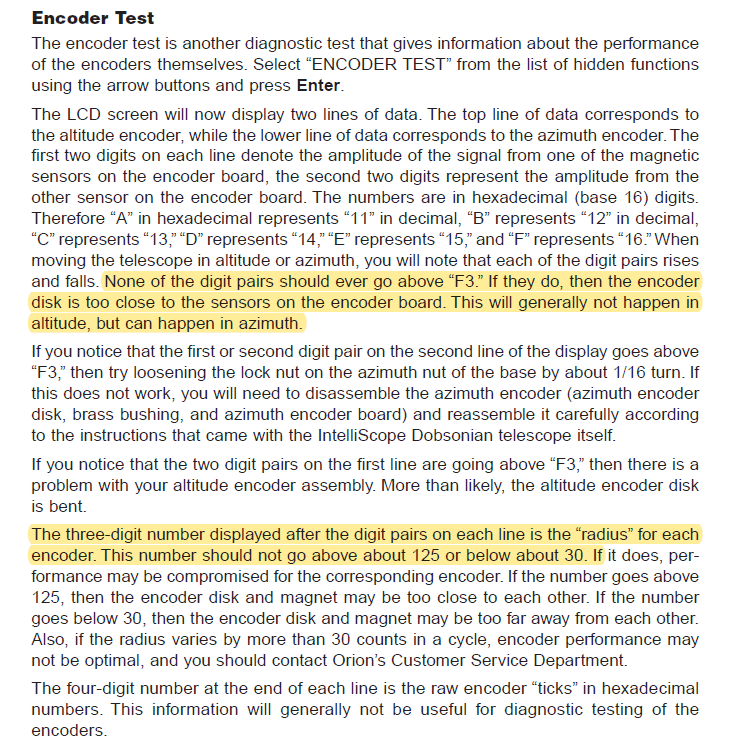 From the manual, section 12. Hidden functions.

I agree with others that have said speed of your alignment is not so critical.  You seem very focused on how much time you spend aligning on the stars.  This may be throwing you off.

What are the warp factor numbers you are seeing?  As mentioned by mitchellcloud, the warp factor can be fairly large and you will still have acceptable results (I.e. object in FOV of your 25mm eyepiece).  I have used warp factors as high as 1.2, even though the manual recommends 0.4.

IMO the most basic requirement is ensuring that the 1st thing you tell the scope is correct, that it is pointing perpendicular to the base plane. If that's off then the error will compound with every further data point you supply. I never used a 3-star alignment but always used the 2-star model successfully. Well, once in a while I'd have to redo, but seldom. A couple of times I got 0.00 warp factor result. That was like finding money in the pocket of a jacket you hadn't worn in years.

And I agree with what Bistromath says about the need for extreme prompt alignment. You don't want to take a  l o n g  time, but centering and initial configuration are more critical.

And I certainly agree with your #1 improvement idea but minus the watch.

A shorter focal length eyepiece may help you actually see the center of the field better and improve your results. If you doubt the accuracy of your centering, defocusing the bright star where its disc nearly fills the FOV and centering that large disc with the thin black ring left around the edge of it can help.

dadorfman - after re-reading your post, I thought about your comment on, "use the crosshairs in the RACF to center the star."  Did you mean to type RACI (right angle correct image) finder?  You mention using an Orion XT10i which is shipped with a RACI finder.

If you are using a RACI finder for Intelliscope alignment, I can understand your concern with the amount of time needed to perform alignment.  Only having a RACI finder can make finding your alignment star difficult due to the likelihood that you are first sighting down the barrel of the scope to get the star into the finder scope FOV.  The 9x magnification will also fill the finder FOV with stars and possibly make it difficult to be certain that the star you have centered is actually the star you want. If this is the case for you, I recommend that you switch to using a 1x magnification finder, in other words, a red dot finder (RDF), Telrad, Rigel QuikFinder, etc.  These finders allow you to easily sight your alignment star because you can keep both eyes open to see a large portion of the sky and quickly point the scope at your alignment star.  If the finder is well aligned with your scope, the alignment star should then be in the FOV of your 12.5mm illuminated cross-hair eyepiece.  You then only need to nudge the scope to center the star on the illuminated reticle and press the Enter button on the Intelliscope handset.

Agree. Install a telrad. You will be glad you did. Also make sure your azimuth encoder is not slipping and that your altitude encoder knob is tight.

I have gotten acceptable warp using only the telrad.

If you want to do fast alignments, or fast star hopping in general, use BOITh a laser pointer and a right angle finder. The laser gets you close. The Right Angle gets you spot on. Super Fast. I use two finders on all my scopes.


Also tagged with one or more of these keywords: Equipment, Reflector, EAA, Visual