I just wanted to take a moment to publish this little mini-guide as I wasn't able to find any instructions online. This way, perhaps someone searching for instructions or compatibility down the road will dig up something.

The Takahashi FS-60CB and other telescopes which use this model of focuser are not listed as officially supported items for the ZWO EAF. Some websites list the FS-60 as a compatible telescope for the ZWO EAF Bracket (EAF-BRK-TK), but the FS-60 and other telescopes with this focuser are not included in the official support list from ZWO. But you can, in fact, install the ZWO EAF onto these telescopes. You don't even need the ZWO EAF Bracket for Takahashi Telescopes, but it does come with one piece which needs to be obtained.

Something along these lines should work with other types of electronic focusers which couple using a plate, flexible coupling, and focus motor. Just need the appropriate flexible coupling (8mm to whatever size pairs with the electronic focuser’s shaft) and a suitable-length M4 bolt. Because this can be mounted at a point on a rail which lines up with the focuser’s rods, it ought to pair with just about any rail that comes with these various focusers.

Because I don't want to buy another ZWO EAF Bracket for Takahashi I'll show instructions using the default pieces which come with the ZWO EAF. But buying the EAF-BRK-TK may make life a bit easier.

Remove the focuser bolt which secures the plate under the telescope. We are going to need to use this attachment point to secure the ZWO EAF. I don’t know what this bolt is called, but it features two small points on the head which need to couple with a tool and be rotated counter-clockwise (looking under the telescope) to be removed. Various replacement focusers tend to come with a tool which can be used to remove this bolt. I’ve read about people using something like a paperclip with bent tips (tried that and it did not work for me), or something like fine-tip scissors (ought to work, but could slip and scratch things up). But what worked like an absolute charm for me was my pointed-tip lens spanner wrench. It came off without any trouble at all. 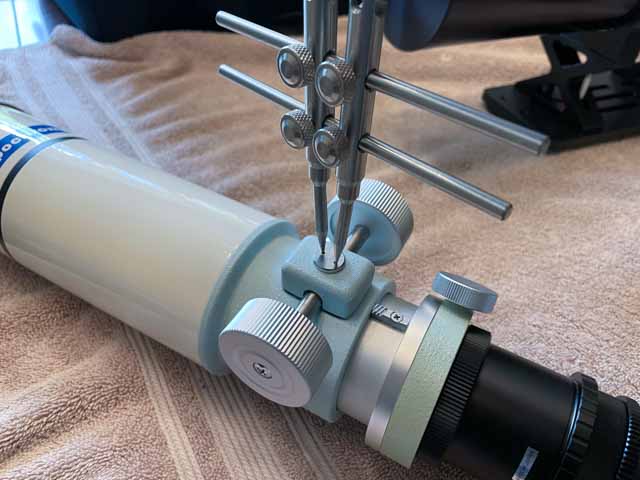 These remove easily. Just use a regular suitably-sized phillips-head screwdriver. If you have the ZWO Bracket for Takahashi Telescopes (EAF-BRK-TK) you will only need to remove one. If you are using the rail which comes with the ZWO EAF, remove them both. Or remove both anyway as the ZWO EAF does not allow for manual operation of the focuser.

Nothing to it. Phillips-head bolts. 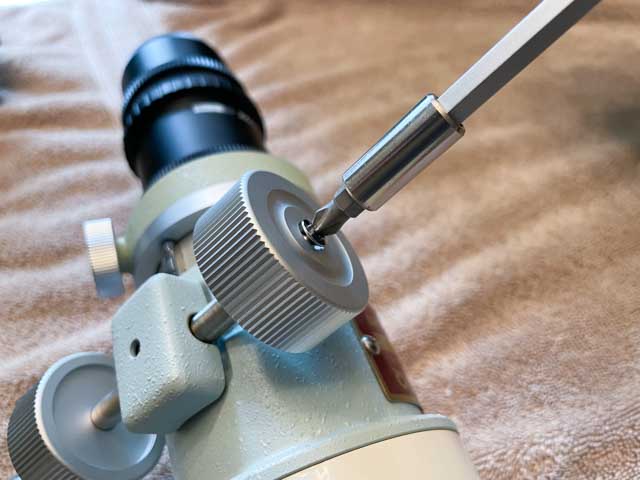 Both knobs must be removed to attach the ZWO EAF with included rail. 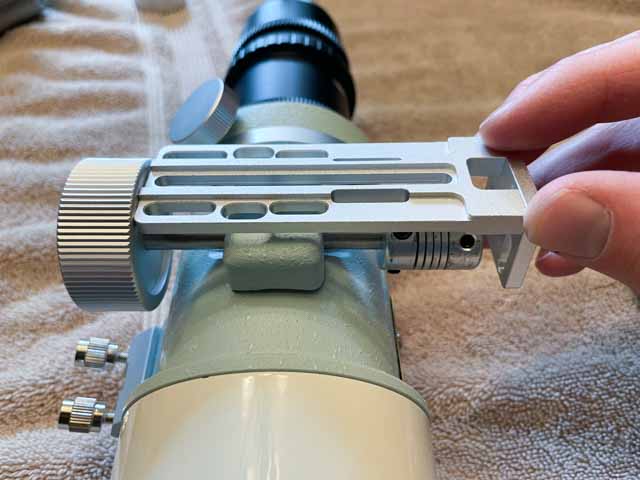 We need an 8mm to 2mm flexible shaft coupling to pair with the ZWO EAF. The EAF does not come with a sufficiently-wide coupling, but the ZWO Bracket for Takahashi Telescopes (EAF-BRK-TK) does. Alternatively, you can buy one from a source like Amazon. If you buy one, make sure you buy a flexible coupling, similar to the ones which come with the ZWO EAF. It would be beneficial to buy a compression-type coupling, in which one of the grub-screws clamps down two sides of a plate, as this will couple better with the smooth, round rod of the focuser, but the standard model can work well. If you have purchased one from a third party make sure the clearances are sufficient for both the Takahashi focuser and the rod on the ZWO EAF before installation to save yourself the trouble of trying to force one off after it has been forced on. Sometimes the tolerances can be problematic, but mainly on 2mm for the ZWO EAF.

Pick which side you’d like to mount the focuser to and push the rod sufficiently far down the shaft, but not so far that there isn't enough room for the ZWO EAF’s rod to insert sufficiently far, and not so far it can rub against the housing of the telescope’s body. Rotate for easy installation of the EAF and tighten everything down.

With the coupler installed, rotate the focuser with the coupler. It should hold securely with absolutely no indication of slippage. If there is too much tension, or you would like to slightly reduce tension, you can remove the plate under the focuser to reveal two Philips-head bolts. Very slightly loosening these will reduce tension on the focuser (or vice-versa). With the standard coupling which doesn't feature a compression fit, it may be worth a moment of extra care, here, as if the grub screws come loose they will scrape around the shaft and prevent autofocus from working properly, creating some cosmetic damage and vulgarity under the stars.

​Note: You want the coupling to hold the shaft tightly, but be careful not to over-tighten the grub screws themselves. Take care to use a well-fitted hex key (if not the one which came with the coupling) to avoid stripping them. 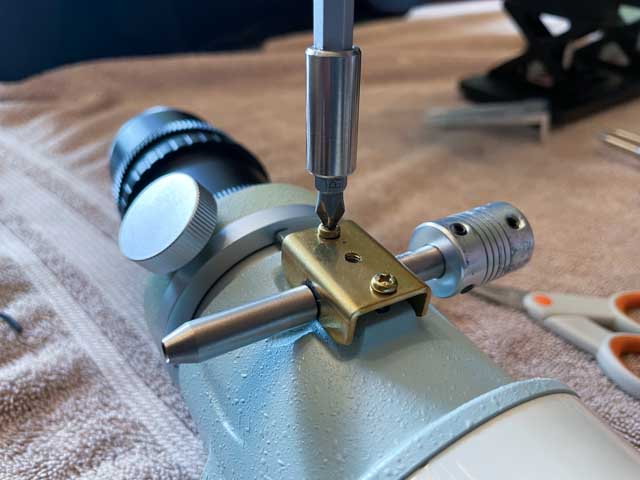 This is a normal installation as per usual with the ZWO EAF and similar electronic focusers. We will be mounting the EAF in the M4 bolt slot of the bolt we removed in Step 1. It would be beneficial to get a replacement M4 bolt as the rail which comes with the ZWO EAF is 5mm thick and the bolt we removed in Step 1 features a shaft 6mm long. I went ahead and used an M4 bolt with 12mm shaft which I had in a kit of spare bolts. I paired it with a washer and a lock-washer. I also reversed the rail so the flat side faced the Takahashi focuser’s bottom plate, and added a layer of padding which would compress under pressure with some sealing foam tape. The former helps to avoid any possibility of slippage and the sealing foam tape was used just to avoid excessive pressure on the bottom plate’s finish, so it wouldn’t suffer any cosmetic damage.

Mount the ZWO EAF with sufficient clearance so the shaft coupling won’t rub against the face of the EAF, rotated it into a position suitable for the rail to line up with the standard mounting points on the EAF, tighten the grub screws, check fitting on the rail, tighten it on the focuser’s body, and tighten it to the ZWO EAF. This part of the installation is standard for the ZWO EAF, and other than the M4 bolt which may be used to attach the rail to the Takahashi’s housing, uses the standard bolts included with the EAF.

Note: If you have the ZWO Takahashi Rail (EAF-BRK-TK) it installs as below, except rather than relying on the central opening you’ll use one of the cross-rails. And that mounting plate is identical on both sides, so no fuss of flipping. It may be worth checking its thickness as needed to determine which M4 bolt is suitable.

​Note 2: Old EAF being moved from another telescope? I’m moving one which is a couple years old. This is a good opportunity to update firmware if needed. It is handled by connecting the ZWO EAF via USB to a Windows computer, with 12v power connection if used, and downloading/running the firmware executable from ZWO’s website. 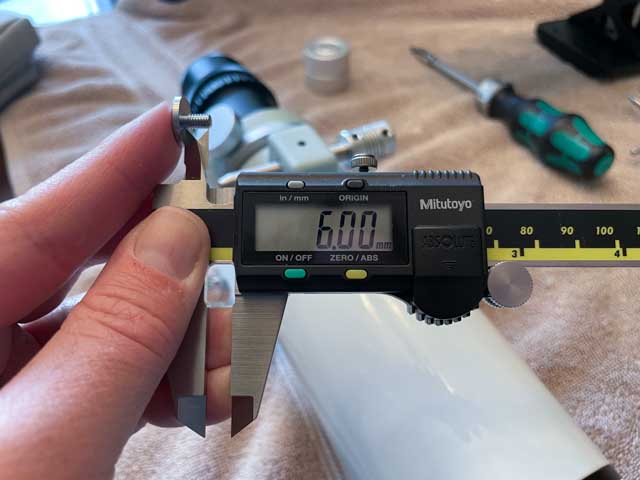 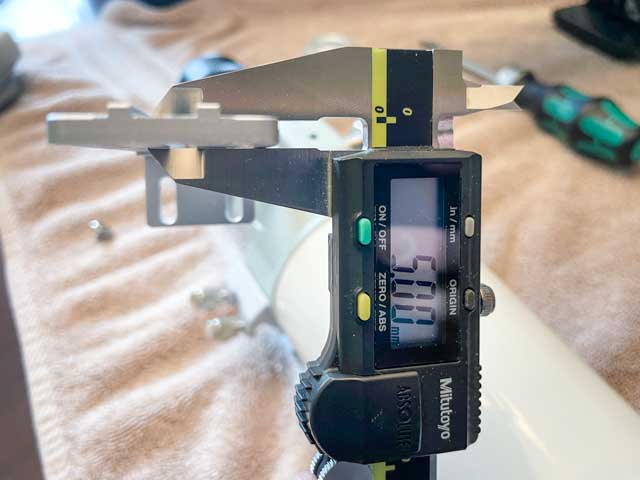 Fitting and installing the ZWO EAF. 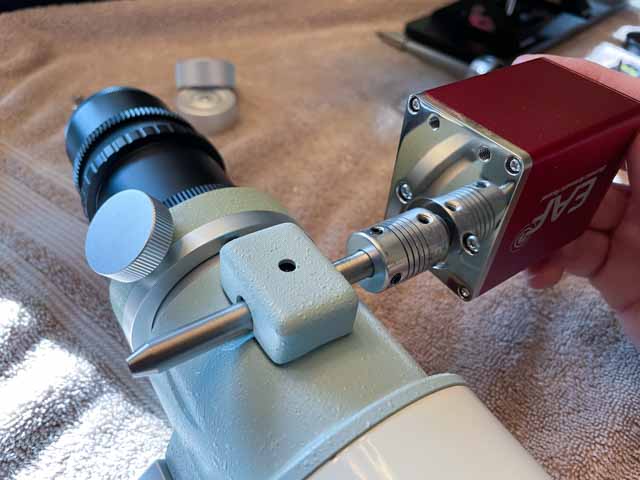 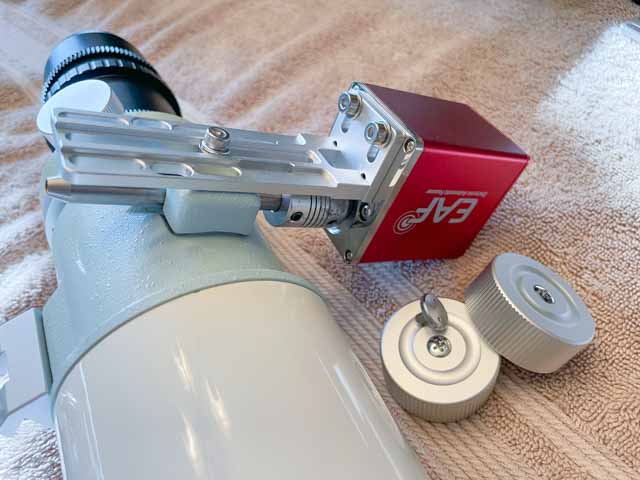 Check your work afterward. Try to make sure the ZWO EAF is relatively square with the rod it will be rotating to reduce tension, especially if the coupling to the focuser is reliant only on the two group screws as opposed to a compression fit. Adjust the rail on the ZWO EAF as needed. And, if desired, connect things up and make sure operation is normal. 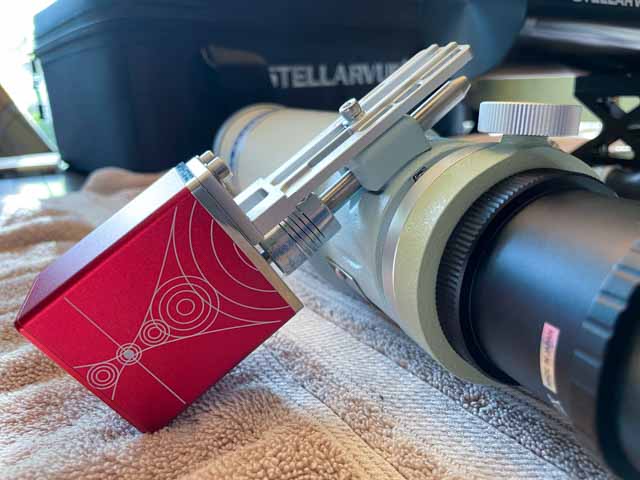 Enjoy. Take a bit of care setting adjustments for the focuser. Add suitable limits on travel, and you will want to reduce step sizes for autofocus and manual fine/rough adjustment. The focuser doesn’t feature a lot of travel, and fine focus, especially with the reducer, is going to depend on rather tight tolerances. As for backlash, I initially entered 30. That's how much travel I needed to employ before I measured a shift of 0.01mm with my calipers. 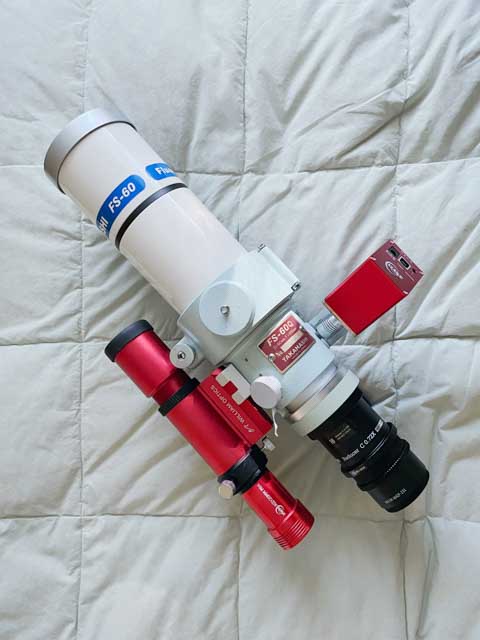 
Also tagged with one or more of these keywords: Accessories, Astrophotography, Equipment, Imaging, Refractor