All planets and the Moon visible at morning

Google says the next similar alignment will be in 2040.

We were fortunate have to have an ISS flyby through the alignment, however I was unfortunate in that I forgot to bring my large external hard drive so I didn't have enough space to capture the whole thing at video-ish rates as I originally planned. I also forgot my UV/IR block filter, so had to unscrew the lens adapter slightly to get things to focus, which resulted in me missing about the first minute, so I didn't catch the ISS until it was over Jupiter.

Apparently not at my best at 4 am

. But still, a very cool sight to see.

Here's a composite, looking over Las Vegas. The Stratosphere is the bright building sticking up, and the Luxor light beam is visible as well, to the right.

QHY 247c, Rokinon 8mm fisheye. Ended up with exposures about every 5 sec, that was as fast as NINA could do. 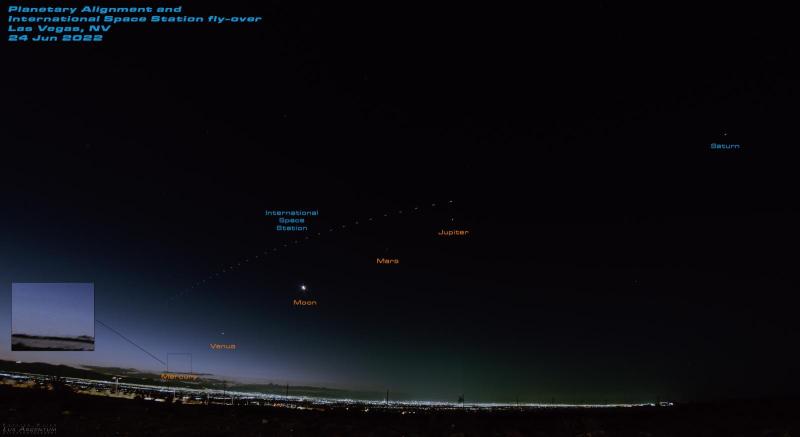 Although Mercury was lost in the glare of the near risen Sun and I could not locate Uranus SW of the Pleiades, what a glorious sight was the crescent moon, Venus, Mars, Jupiter, and Saturn!  Used the Tak 100mm.  4:15 am to 5:00 am Eastern.

Well, I did it yesterday, Saturday, June 25! I'm not sure I've ever observed all the planets in a single session before. Plus the thin crescent Moon and asteroid Vesta. It required a fair bit of planning, plus a trial run the previous morning.

Mercury, of course, is the problem child, since it's still very low at sunrise. By the time Mercury is well up, the sky is already too bright to locate Neptune easily, so I was resigned to viewing the planets sequentially rather than all at once. Ironically, this would have been trivial if I were at my city home, because my local park (atop the old town garbage dump) has almost unobstructed views to the east. But since I'm at my hilly country home, I did the first half of the observing from my backyard, with a decent view to the south, and finished at my neighbor's yard, which has a pretty low view to the east-northeast. Good thing it's the solstice, when everything rises as far north as possible. Nowhere near me has a decent view to the east-southeast, or even due east.

I tried to observe them all in distance order, starting with Neptune and ending with Mercury and the Moon, but that wasn't really feasible, since Uranus was still below the treetops when I started observing Saturn. Also, I used the Moon to start my star-hop to Uranus, since nothing else in the vicinity was visible in the morning twilight. Curiously, Vesta, Venus, and Mars are currently all almost exactly the same distance from Earth; I had to look them up to find the correct order.

I considered starting the session with Pluto, which would have been logistically possible. But I was using my 7-inch Dob, and although I have spotted Pluto once through that scope, that was decades ago when Pluto was quite a bit brighter and my eyes were better. At this point it requires my 12.5-incher, which is far too clunky to transport to my neighbor's yard in the wee hours of the morning. Besides, Pluto is always hard work, and I (correctly) anticipated that everything else would be easy.

I also considered observing Vesta twice, early and late, to see its motion through the stars. Normally I don't count an asteroid as well-observed unless I do that. But again, it's pretty hard work, especially considering that the sky started to get light almost as soon as I was outside.

The session did have some surprises. I ended up observing Uranus when the sky was too bright to see any but the very brightest stars; I was surprised that it was so easy to star-hop to it in a sky so bright. And the view was actually half-decent; quite likely the bright sky helped defined the disk's edge and bring out the blue color. In any case Uranus was a very substantial blue circle at 184X.

As luck would have it, I was barely able to see Mercury naked-eye when it cleared the treetops 5 degrees above the theoretical horizon. I kept wondering where it was until I tried binoculars, which located it in a few seconds. And after that, knowing exactly where to look, I could just barely see it without optical aid. The telescopic view was not very good, even though I followed it almost to sunrise. It was obvious that Mercury wasn't round, but I would have guessed it was fat gibbous when it was in fact 57% lit.

I did in fact track Venus past theoretical sunrise, at which point it was still quite obvious to the unaided eye, and fairly high in the sky. Its gibbous phase was quite obvious at 120X, helped by its decent 19-degree altitude and the very bright sky background.

If I had my solar filter, I would likely have waited for the Sun to clear the treetops, too. But as it was, I went home and took a nap in the vain attempt to make up for rising before 3 a.m.

I got clouded out the whole week.  Had a tiny break this morning with a sliver moon, though still fairly cloudy.  No Mercury with the clouds at the horizon.  I only brought the 16x70s, so I didn't even attempt Pluto.  It would have been nice to see them all from Mars Hill, but Mercury is only going to get harder, and the clouds aren't going away.  Six out of seven isn't bad, but I may have to make a drive tomorrow.

Located and tracked Pluto over the last two nights through the 12.5" dob, where it is only just detectable from my backyard, the 10" no longer a viable option, here.

Then, set up the Borg 90FL on a Meade LX-70 with RA drive, and proceeded to observe Saturn, Neptune, Jupiter, Mars, Uranus, Venus, the Moon and finally, Mercury, through it.

I think this is the first time I observed all on the same night. 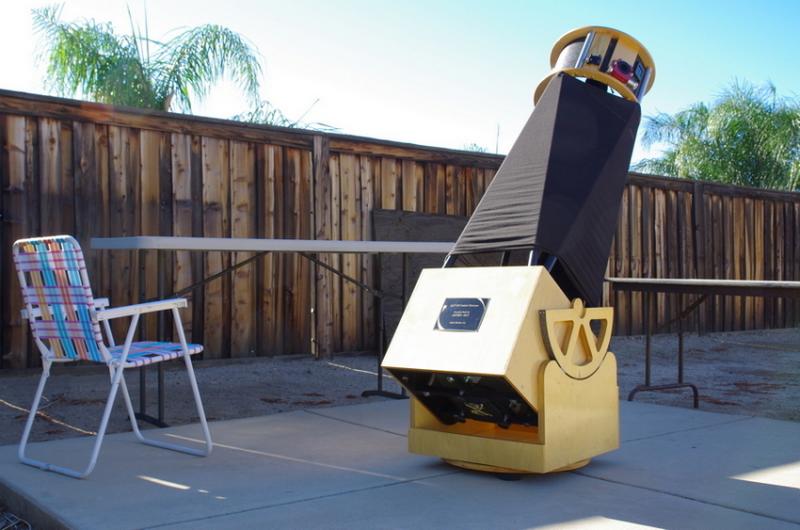 The last item to put away.

Finally happened.  All the planets and a 2% Moon.  That will never happen again!

Here's what Luna and Mercury looked like near me, this morning: 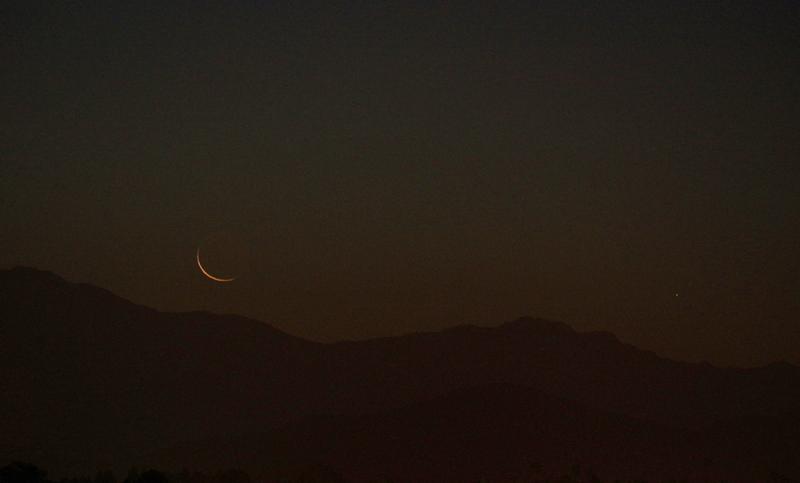 I was out all night doing some observing in a Bortle 3/4 site in eastern Colorado the morning of the 28th. I saw the usual bright planets, plus Mercury, with my naked eye, about 0430 local time. It was a rare experience, one that I will never forget!

I was wondering if anyone here spotted Uranus with the naked eye in the planet lineup this month because I'm pretty sure I did. It was an hour before sunrise, so it was during astronomical twilight. I looked at its position on SkySafari, then followed my eyes along the ecliptic to where it should be, and I did see a *barely* visible blue/green pinpoint. There were no stars in the immediate area. Is that even possible, or was I imagining things?

Uranus can be visible naked-eye under the right conditions, I've seen it myself, though my local skies won't permit, anymore.