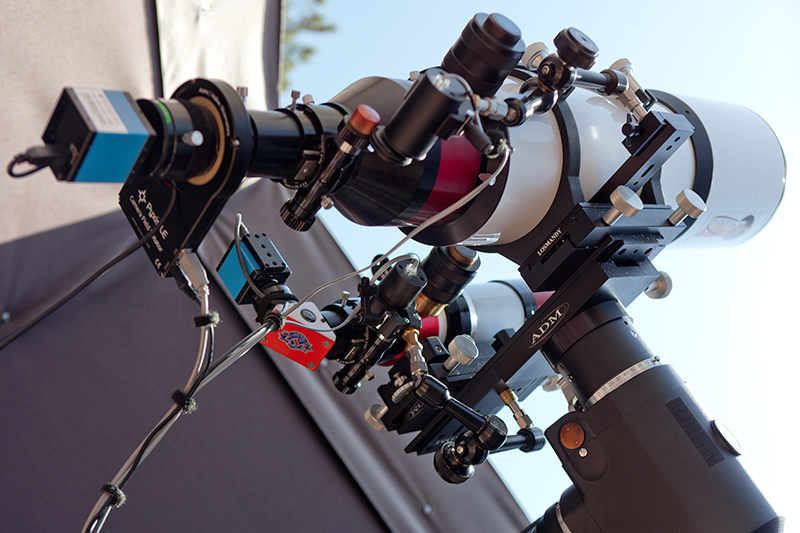 Keep Looking Up (not Diagonally)

14 replies to this topic

I like to go outside and look up at the sky at night
while standing with my head held high. I want that
same experience when there's a scope between me and
the cosmos. A real benefit of standing behind the scope
with straight optics is how natural it is to accurately
point. Dropping planets in the center FOV between
100-200x is dead easy.

Casually Tele Vue ing Saturn in the city straight up for
4 minutes at a time as it drifts through 100 degrees
of Ethos 13mm mated to NP101is by 2.5x Powermate 104x: 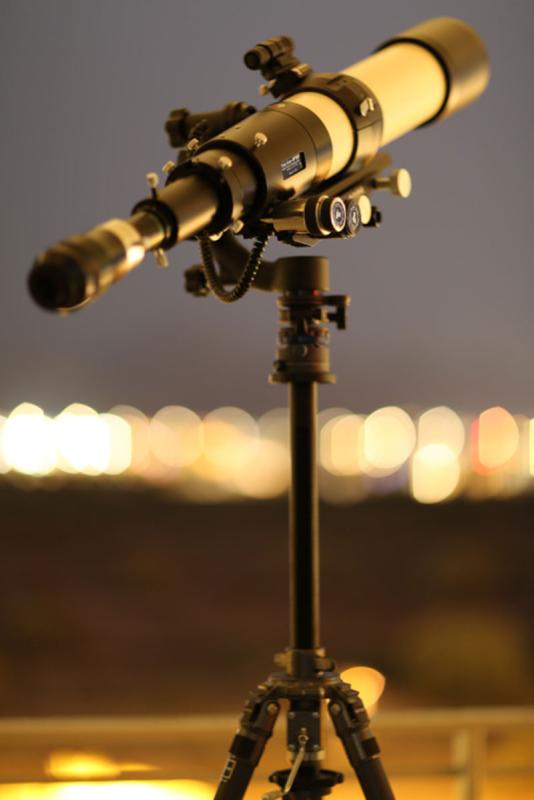 Are you a straight shooter too?

Literally straight up?  Nu-uh.  Not unless you are lying flat on your back.

Good approach - an added benefit is that it's 1% brighter. Every photon counts.    Tom

I did that once. I laid down flat on the ground, and behold, I fell fast into a deep sleep. When I woke up I quickly realized that I was already late for work.

But yes, straight up is certainly better.

Some of these 90-degree Diagonals would work well.

I think that Ion (OP) was viewing objects below about 45* (the planets) that are usually more accommodating to straight through viewing and in some respects, are sometimes easier to view than when using a diagonal.

This setup works well for watching moon or sunrise and the planets
come up to about 25 degrees, then I'll switch to a 60 or 90
degree diagonal depending on scope elevation. As for looking
straight up, when Saturn is at 25 degrees elevation and placed at
the top edge of Ethos 100 degree field, one does have to look
up to 75 degrees altitude to directly see the planet

Neither my back nor my neck works that way anymore. Like the idea though.

When  I started out (1960's) I had read that star diagonals tended to reduce light-grasp and performance.  So, with my first refractor, I often set aside the diagonal in favor of straight-thru use -- even when observing near my zenith.

More recently, there's the Galileoscope (shown in my avatar).  That's a strictly straight-thru telescope that I've used to observe all manner of celestial objects -- with an absence of any "real" problems.  Though I did opt to lie down and use that telescope handheld when observing the North America and Veil Nebulae when they were very near my zenith.  For all other observations, my Galileoscope was used with the tripod/mount shown in my avatar image.

Right-Angle finders have only become popular quite recently.  Prior to their increased popularity people were doing just fine (or at least making do with) using their various flavors of straight-thru finders.

In a recent Galileoscope thread the straight-thu vs. diagonal usage came up.  One person basically stated that they could not recommend that telescope because he (and his wife) suffered neck pains -- due to having to use the Galileoscope straight-thru.  But realistically, I think it's incorrect to assume that all other users will similarly end up with neck pains.  I suffered no neck pains, and I've made fairly extensive use of my straight-thru Galileoscope; observing, taking notes, and even taking the time to make sketches.  Then there's the long history of others using straight-thru refractors.  I've not heard of neck pains being a common issue among 18th and 19th century telescopic observers.

When it comes to objects near one's zenith; from most of our observing locations, if we observe on a different date, or at a different time of night we can "catch" the same object when it's at a more convenient altitude for straight-thru observation.

So, yeah, I'll sometimes use an astronomical refractor straight-thru.

That being said, there are things that one can do to make straight-thru use more comfortable, details such as eyepiece height, how one sits (or stands), paying attention to where (in relation to one's zenith) an object is located before deciding that "now" is the time to observe that object, etc.  But (with a bit of sarcasm in mind) I guess the typical visual user of astronomical refractors today are less capable than those in the past, less healthy, less determined, less innovative when it comes to problem solving, etc. than were their 18th and 19th century predecessors.

I think straight through is possibly more advantageous for lunar and planetary where the absence of a diagonal would mitigate scattering, although a good prism diagonal will suppress scattering.  For deep sky and doubles, I do not see any advantage to observing straight through; in fact, it can be a hindrance for lunar and planetary, because comfort at the eyepiece is important to observing those fleeting moments of good seeing.

In my younger days, yes, I would observe through my refractors without a diagonal.  That was 45 to 48 years ago, not anymore.

When I wore the clothes of a younger man, I did quite a bit of

straight through observing. Now in older age, it's just a memory of former

times of better health that will never return.


I was thinking about TFOV


Also tagged with one or more of these keywords: Visual, Observing, Refractor