The ISS and Saturn share the skies above Temecula, CA in this single frame 1ms exposure captured early Friday morning.  Despite the close proximity in frame, the range to the ISS at the time of the image was 602 km, whereas the distance to Saturn was 1.38 billion km.  This is not a composite image, but is a single frame pulled from a video that I captured at 04:26:23am PDT on June 24, 2022 from the parking lot of Red Hawk Elementary School in Temecula, CA (exact GPS coordinates of telescope setup are 33.4688N, -117.0984W). 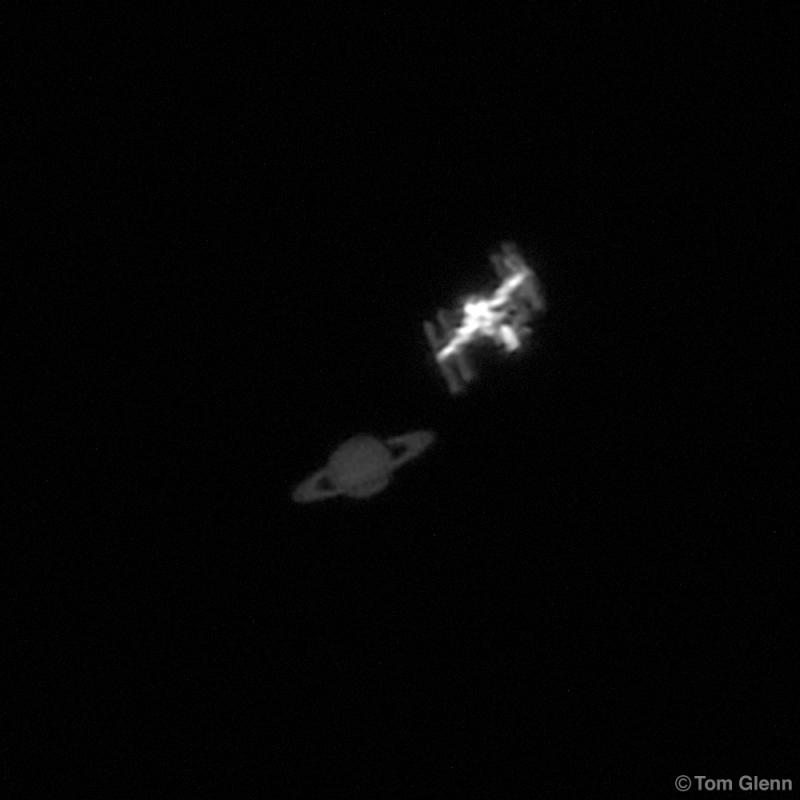 I uploaded a video that includes the raw data to YouTube:

Despite the short exposure necessary to freeze the motion of the ISS traveling at 7.4 km/s, details on both the spacecraft and Saturn are simultaneously visible in this single frame.  These include hints of the Cassini division in Saturn’s rings, as well as the shadow of Saturn’s globe on the right side of the rings, indicating that we have not yet reached opposition from the Sun.

Capturing this image was a logistical and technical nightmare, and I estimated a low probability of even registering the ISS in the camera frame.  The orbital elements were unstable due to both a debris avoidance maneuver that required an unplanned rocket burn as well as an aborted orbital reboost maneuver.  The ground path was plotted in Google Maps using Ed Morana’s excellent program, but the software is only as good as the input data, and it turns out that there are multiple sources of ephemeris data, as well as interpretations thereof, leading to some conflicting conclusions.  Ultimately, an executive decision must be made, and in this case, I made mine at 2am Friday morning while pulling an all-nighter and driving to the selected location with fingers crossed.

Arriving onsite at 3am, I was met with several unplanned (yet paradoxically completely expected) disasters, including Firecapture not recognizing my camera, which required deleting and reinstalling the program in the field with a rapidly increasing heart rate.  Although there were several compelling theoretical reasons to use my ASI224mc with a faster frame rate, I wasn’t about to change cameras at this point and risk another troubleshooting session, so I left the ASI183mm in place, and adjusted the ROI as best I could to accommodate a necessary margin of error in the FOV with frame rate.  The other issue here is the extreme difference in exposures.  The ISS was flying by at magnitude -3.3, whereas Saturn was closer to +0.5.  This is not a good combination, and requires a substantial underexposure of Saturn.  I decided to capture in 12 bits, despite a reduction in frame rate to 38fps, because of the significant shadow pull that would be necessary to reveal Saturn from the darkness.

The image in the next post is a time-lapse composite of each frame containing the ISS, blended using the “lighten” mode in Photoshop.  Notice that there is actually less detail in Saturn because of this blending method (it turns out my sharpest frame for Saturn was the frame for the closest approach!).

I can’t adequately describe how exhilarating it is to watch the ISS streaming towards Saturn with such speed and brightness, and to look down at my laptop just before the moment of truth, and see a bright flash streak across the screen.  Although Saturn and the ISS are not touching here, I consider this a bullseye because of the remarkable accuracy, which is well under the reported limitations of publicly available orbital elements (which only locate the spacecraft to within ~1km). 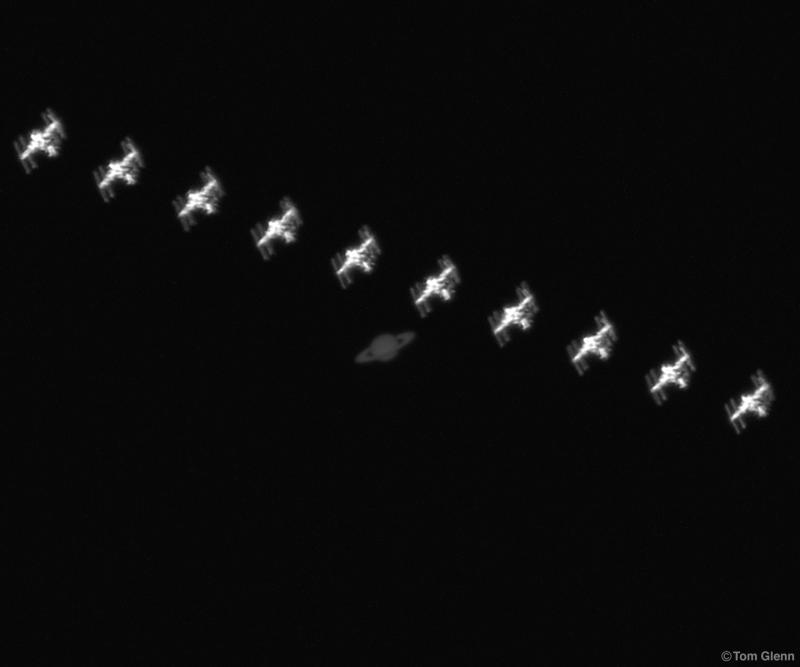 Very nice sequence! ISS can be so bright and Saturn is faint in comparison.

Wow - I'm sure NASA will be knocking on your door to ask for prints for the astronauts on board.

Yep, I believe this picture has a bright future! One in a million shot!
And your summary made me feel like I was there. Congratulations!

another fantastic shot! i still show people your mars/iss image

Those are the posts we live for!

SPECTACULAR!!! Doesn’t begin to describe this piece of work, especially for those of us who have tried just to get the ISS in camera frame. You pull off these miracles with precision and skill that I for one am in awe. We know the amount of planning ahead of time that you must do not to mention traveling to locations to an accuracy of just a few tens of meters at best. Your description of the event is thrilling to read. Congratulations to you sir!!

I feel your pain regarding the camera communication problem - good recovery on your part!.  I lost a chance to get a similar image with ISS/Jupiter because of the same problem, without enough time to fix it.  Served me right for not testing everything beforehand.

These types of serendipitous opportunities are very memorable achievements when they come through Tom - & this one certainly did..!

Excellent! "Up there" with your Mars and ISS pic, Tom. I bet you're planning Jupiter next, right?

It feels good when a plan comes together.
I wanted to do this with EchoII and the Moon in the late '60s. No go, because the 'puters and the data wasn't available.

This is really amazing!

Superb Tom! Thanks for sharing the images and the story.

Are you considering brightening the Saturn part of the image or is your preference for the unmanipulated image?

Awesome! Should be a good APOD candidate!

WOW!!!!  There are no adequate words to describe this.  Great job and amazing perseverance.  Well done!

Thanks to everyone for the very kind words!  I truly appreciate it!  It's very fun to plan for challenging projects like this, but it's equally fun to share the results.  There are a number of interesting issues that could be discussed, but I think one of the most interesting is a response to Mark's question above (and copied below).

Are you considering brightening the Saturn part of the image or is your preference for the unmanipulated image?

This is a great question because it touches on a variety of issues involving aesthetics and the accurate representation of the data.  Both of these are open to interpretation, and there are a variety of ways one could proceed, provided that an honest description of the processing is described.  For this first draft of the image, I like that Saturn is dark because it reflects the reality of the exposure.  It also adds a sense of mystery, and reflects the great distance between the two objects.  I could increase the brightness of Saturn, although that would require that I specifically address Saturn and not touch the rest of the image, which means the relative brightness will no longer be accurate.  There's nothing wrong with that approach, although I wanted my first version of the image to reflect the darkness.  It's also the case that because this is a single frame image (which IMO is necessary to represent a rare action event), there is a more limited amount of brightening that can be accommodated without introducing excessive noise.  Keep in mind that this image is extremely underexposed for Saturn.  In order to demonstrate the extreme difference in brightness of the two objects, I want to provide an example below.

The first image is the raw image, with no adjustments, assigned to sRGB color space.  The second image has been gamma corrected (approximately gamma 2.2) before being converted to sRGB color space.  I have written extensively about gamma before, but it is an often misunderstood topic (including by me in the past!).  The linear images that come from astro cameras do not represent what our eyes see, and traditional cameras apply gamma correction before you ever see the image.  I've seen it mentioned elsewhere that it would be "impossible" to expose both Saturn and the ISS at the same time.  This is not the case, it is quite possible......but you just can't expose both of them to an ideal amount.  In the raw image, Saturn represented <7% of the histogram, and portions of the ISS were still saturated!  But with gamma correction, the compromise worked out pretty well. 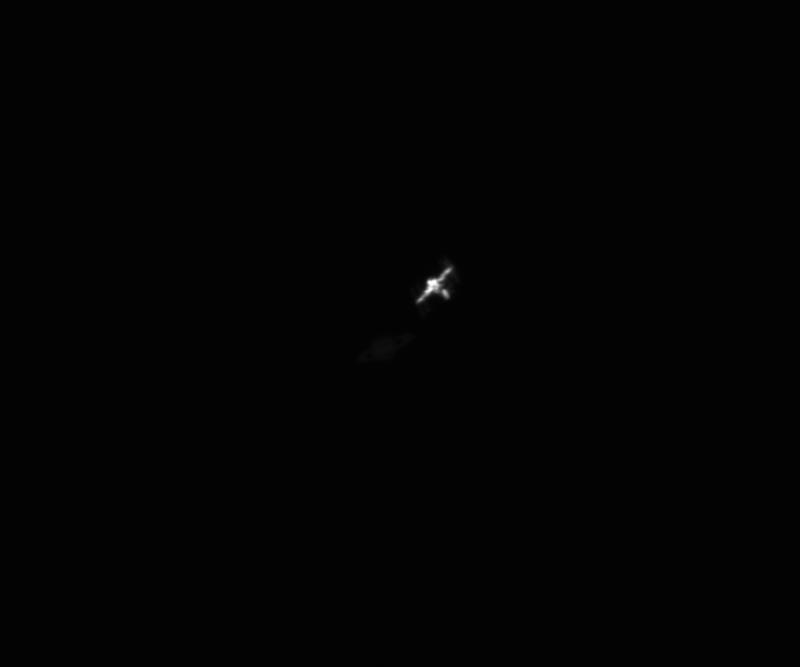 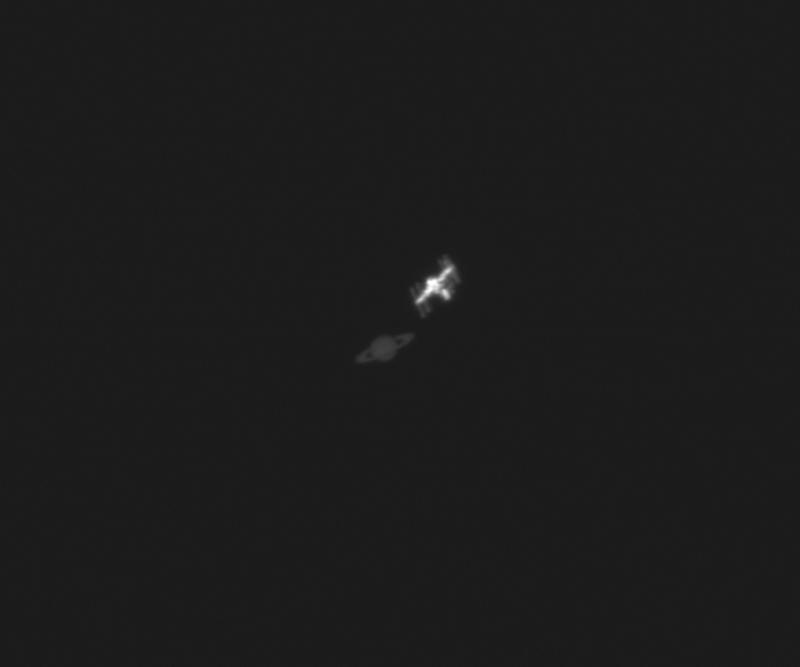 Thanks Tom! I was hoping that you would give us an enlightening response and so you have. It doesn't close off thoughts, but rather, it stimulates them.

I tied myself into ethical knots in April with the conjunction of Jupiter and Venus and the following alternatives:

1. Do a wide field shot that captures both to position the two planets on a broad canvas, then superimpose ROI images of each captured in the same session, and each processed to perfection for the individual planet;

2. Do a wide field shot optimized for Venus with Jupiter very dim, and present it as such;

3. Do a wide field shot optimized for Jupiter with Venus burning a hole in your retina, and present as such;

4. Do 2 and 3, then combine the two as layers showing off each to best advantage.

Unfortunately, I was thinking this through in real time as I imaged, and I landed on #4, which I presented here. I reasoned that #1 felt too much like a collage (leading to the uneasy conclusion that you can create your own conjunctions at will).  On the other hand, neither #2 nor #3 would quite cut it in my end of year photo album (ever popular with the family!), although these felt to me like the more "scientific" options.

Interestingly, one of my mates suggested #1 was the right option, provided it was fully transparent what I had done.  But that collage approach just seemed to me too easy.  There is something about the technical challenge of capturing both planets in the same field that somehow makes #2 and #3 more appealing to me, even though, in my darker moments, I think layering as I did in #4 is just another form of collage.

These are the angst-ridden thoughts that can strike at 4 am!