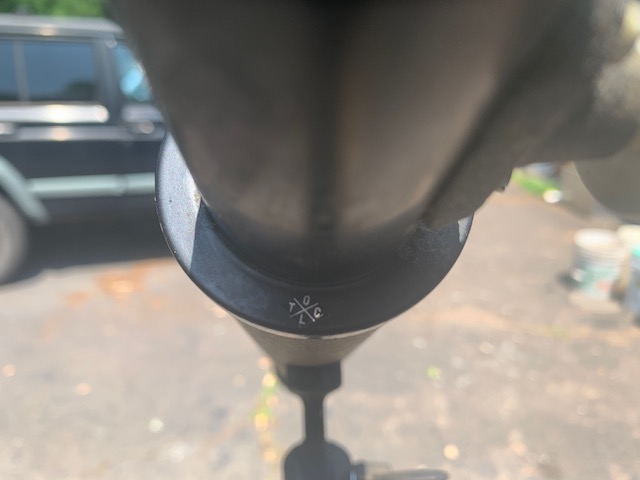 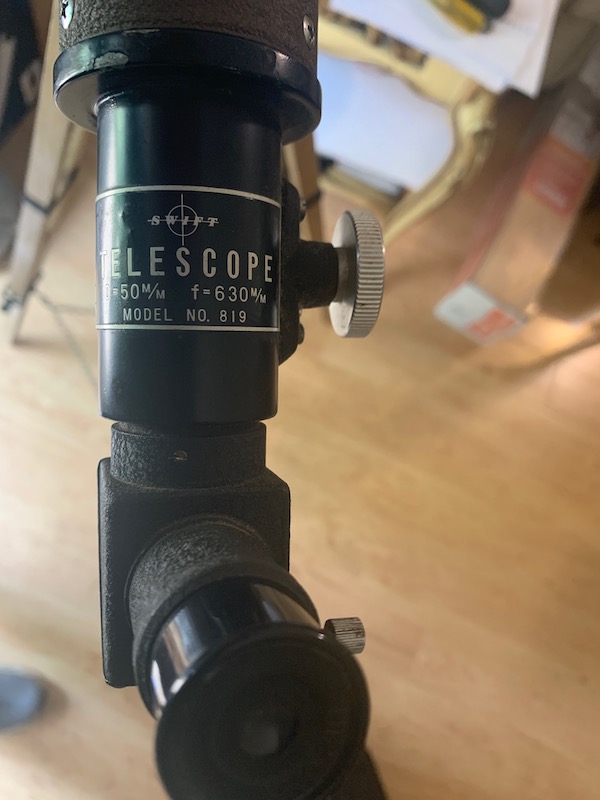 I picked up an vintage Swift this morning.  It definitely needs a cleaning of the objective lens and diagonal.  I was looking through old posts to help ID the objective.  Can anyone help ID the manufacturer’s mark?  It has a “unique” focal length of 630mm.  I am getting ready to take additional pictures and post them. 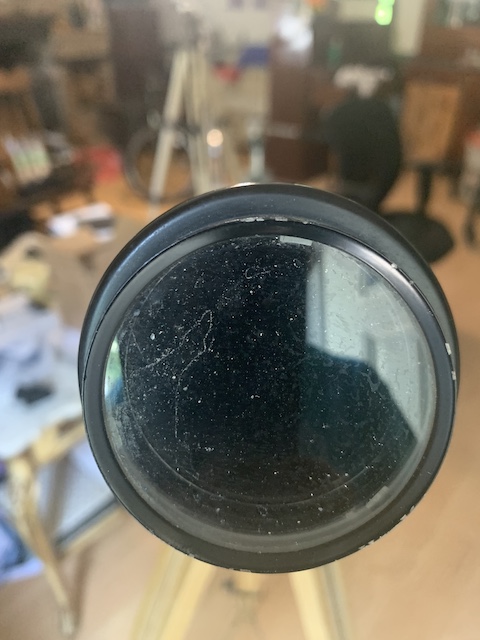 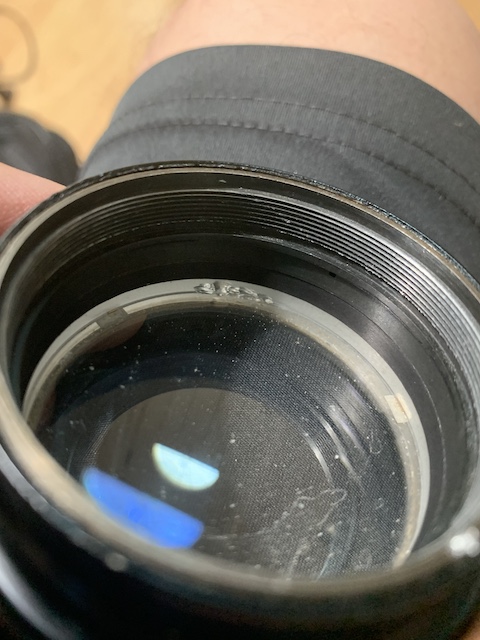 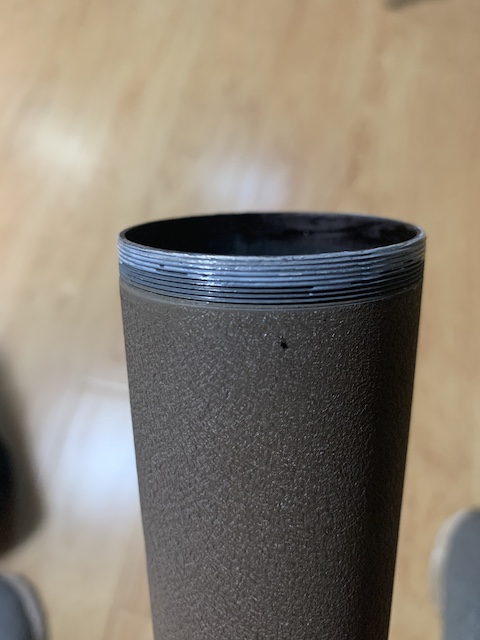 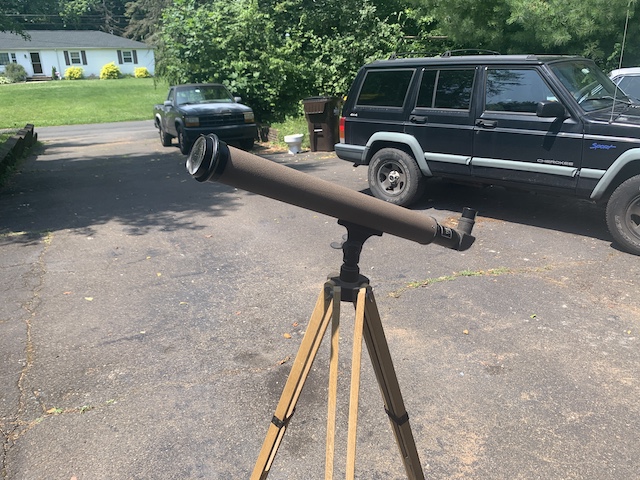 I added a few more pictures of the scope.  I removed the objective for a better view and a quick clean.  A previous owner may have tried to take it apart, it looks like a chip at the edge.  The threads on the tube needed a little TLC before I could thread the cell to the tube.  I haven’t been able to get the cell apart, there is a threaded ring that needs to be unscrewed.  I wanted to give it a first light tonight before I take it apart for a full clean.  I did take a look through the scope and so far it looks good.  The prism is very dirty, so I think I’ll give it a clean before I test it tonight.

Nice one! I like that Jeep Cherokee there, too.

I was able to remove the cell and take apart the objective for cleaning.  I had to improvise to open the cell since there were no slots for a spanner.  A previous owner must have tried to disassemble it before me because there was a chip in the retaining ring.  I tried to file an additional slot in the retaining ring but I could not get enough leverage to loosen the ring.  I decided to take out the old tools and try a different method.  I had a leather belt to hold the cell assembly tight and a set of internal snap ring pliers for leverage.  (Yes- I did add some thick foam and protection to the lens before I started with the tools.  No need to scratch or break it while trying to disassemble it.). Before I started, I noticed an area with a bunch of chips.  All the damage is on the outer edge- I don't think it will interfere with the optics. 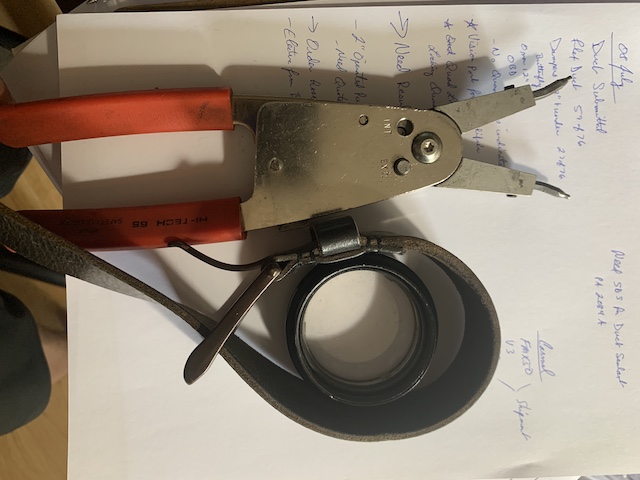 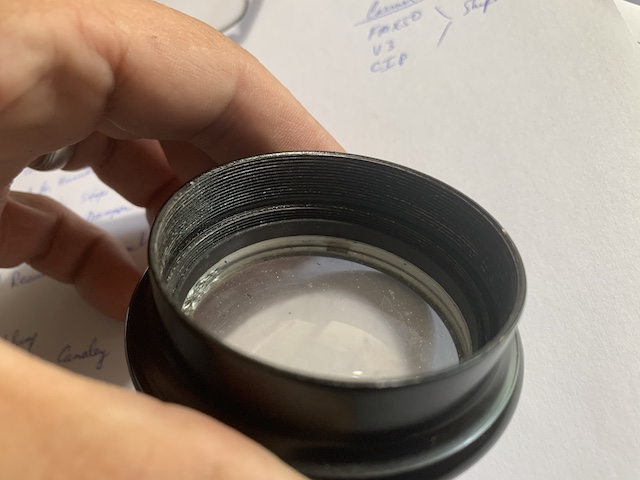 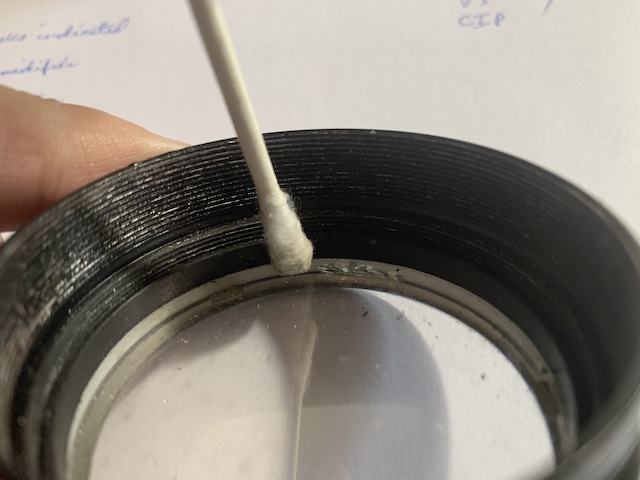 I marked the lens for reassembly and prepared to give it a first round of cleaning.  I removed the small fragments of glass without any other damage to the lenses.  The lenses are quite dirty, but I expect them to cleanup for a nice view. 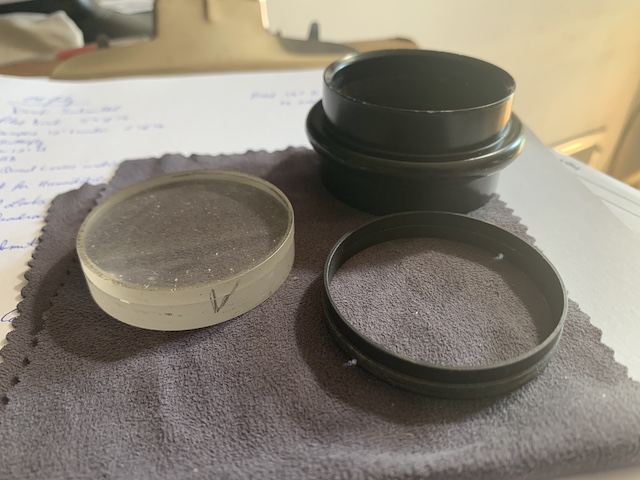 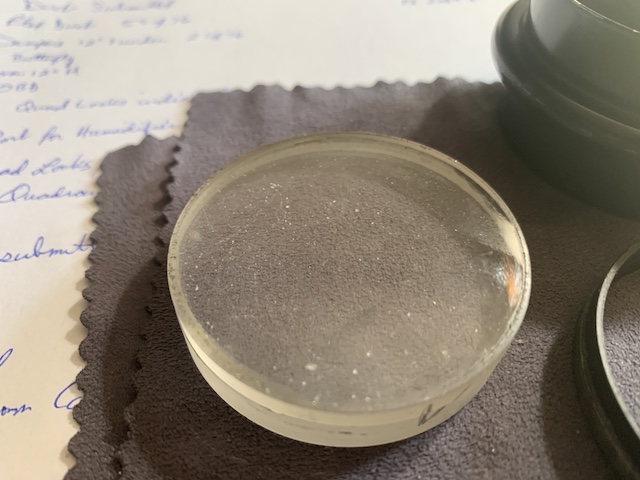 I have a family outing to a local Nature center so I don't think I can give it a first light review.  I am off to clean and take a few more pictures.

I was able to clean the lens and reassemble.  As usual, the clouds rolled in and I was busy so I didn't get to test the lens after cleaning.  Optically, it is now clean and clear.  I took out my handy CFL lightbulb and did a test.  Newton rings were visible and well centered after reassembly.  I am starting to get a good feeling that this will be a keeper as well as a nice Grab and Go.  So off to the test to see what it provides.  I'll start with a quick first test that I did with the dirty lens.  I could see some stars and light but it was really difficult to get any clarity.  On the test I did on Vega and Arcturus it went from mush to mush with a side order of slop.  Although it also did something that I didn't expect.  When I went "In-focus" and "Out of focus" the only words I can use to describe the view was that it reminded me of a genie in a bottle.  It starting with a swoosh from the center and expanded.  It did the reverse as I took it back to focus.  The first light test after cleaning went much much better.  I took out his younger brother (Swift 838) to do a comparison.  Both scopes are 50mm objective lenses with a slightly different focal length.  Some might say I was playing "Dueling Takahashi's" but I really don't know if these scopes are truly Takahashi.  I lined up both scopes on the moon and started with an 18mm Tak ortho.  Crisp clear images through both scopes.  I went a little deeper with a 12.5mm and had the same results with both scopes.  I jumped back to the 25mm and the views were still crisp and nearly identical.  The last test on the moon was done with the 7mm.  Nice clear images left to right and top to bottom- exactly what I had hoped to see.  I will say that with the 7mm, the views begin to darken.  No complaints on clarity, just the light throughput starts to weaken.  It was now dark enough to start the star test.  I pointed both units up and aimed at Vega.  The 838 with a finder is much easier to align than the 819.  As I continued through the night it is apparent that a finder should be attached.  With Vega shining, I started the star test.  Take it to focus, go in-focus, take it back to focus, and rack it out of focus.  A nice concentric disk with concentric black rings.  I changed over to the 838 and duplicated the process.  Both scopes are performing equally.  Changed some eyepieces and redid the test.  Still happy with the performance.  Next I moved over to Arcturus for round two.  Did the same tests with a few different eyepieces.  Results were the same.  I figured I should complete the Summer triangle and swing over to Antares.  With the almost full moon, I didn't think I would be able to test the scopes.  I had to move around the front yard and position a tree in front of the moon.  Both scopes received some washout from the moon but I was able to get in a fair test.  Convinced they are performing equally, I took the 819 back to Lyra and dropped down to Cygnus.  I started at the tail and star hopped to Albireo.  A nice clear view and a passing grade.

I was able to clean the prism diagonal and the OTA.  Everything is in good shape.  The OTA has a few scrapes and chips in the paint.  I am pretty sure that it is from the 50's so I can't really complain.  I think I will keep it as original as possible.  One upgrade that may need to happen is the interior of the OTA has faded.  I think it is just the age of the scope.  This raises the fixes to three.  Flock or paint the interior to help contain stray light and attach a finder to help with positioning. The third fix is mechanical and I'll post about it later.  I'll attach a few more pictures of the cleaning and reassembly when time permits.

In the Grab and Go thread you mentioned guessing it's from the mid 50s or earlier but I thought it was more appropriate to discuss it's age here.

In terms of vintage Japanese telescopes, very few made in 1955 or earlier ever turn up, and of those that have, I can't think of one that had a stick on foil badge instead of a engraved focuser. Also, it looks to be from the same model line as the 60mm 820s which have characteristics very much in line with other brands made in the '58-'60 time frame. 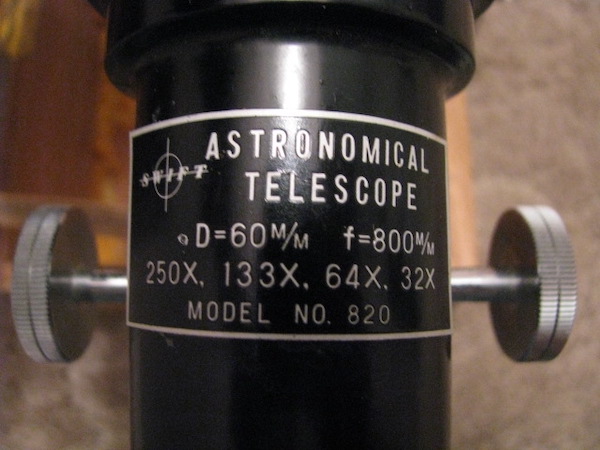 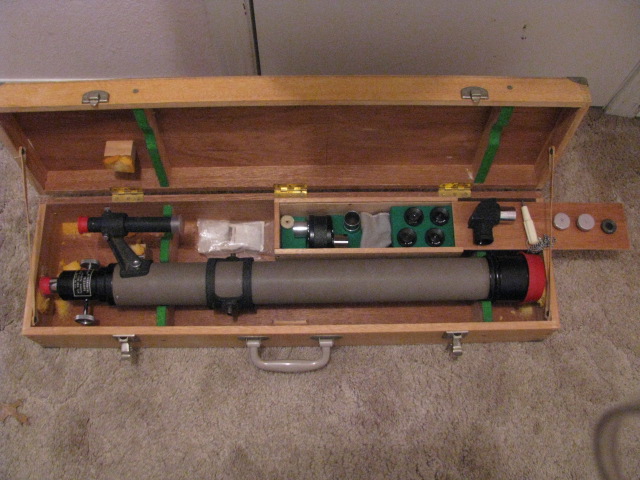 And here's another 819 but with some differences 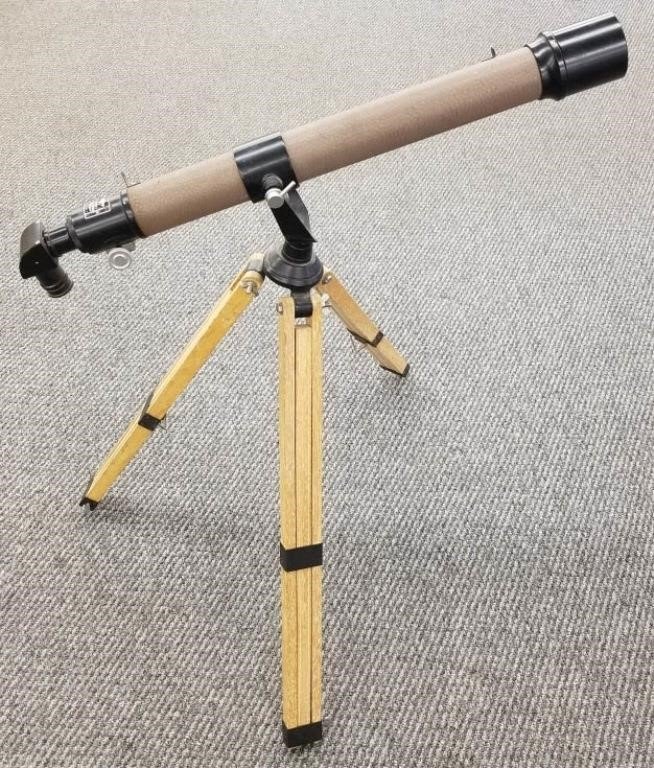 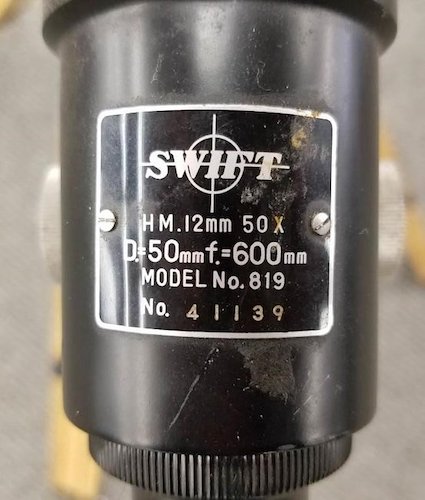 Note it has a screw on badge, a serial number, different focal length, and two knobs

In the Grab and Go thread you mentioned guessing it's from the mid 50s or earlier but I thought it was more appropriate to discuss it's age here.

In terms of vintage Japanese telescopes, very few made in 1955 or earlier ever turn up, and of those that have, I can't think of one that had a stick on foil badge instead of a engraved focuser. Also, it looks to be from the same model line as the 60mm 820s which have characteristics very much in line with other brands made in the '58-'60 time frame.

And here's another 819 but with some differences

Note it has a screw on badge, a serial number, different focal length, and two knobs

Thanks for the update on the age of the scope.  I took a stab at the age based on a single knob on the focuser and a focal length of 630mm.  I don't have an accurate way to date the scope- I knew it was older than my 838 but not really sure how old.  Maybe there is a way to date Swift scopes based on their script/ block lettering on the foil badge.

I was able to get a couple more things done to the scope this weekend.  I ordered an oilite bushing and installed it to eliminate the backlash.  The Kapton tape I used was good for a night of observing, but the functionality was not what I wanted.  I ordered an 8mm x 12mm oilite bushing and 12mm twist bit.  I put the altitude block in the drill press and bored through the existing worn out hole.  I internally struggle when drilling into antique equipment, but the need for smooth operation is a requirement. 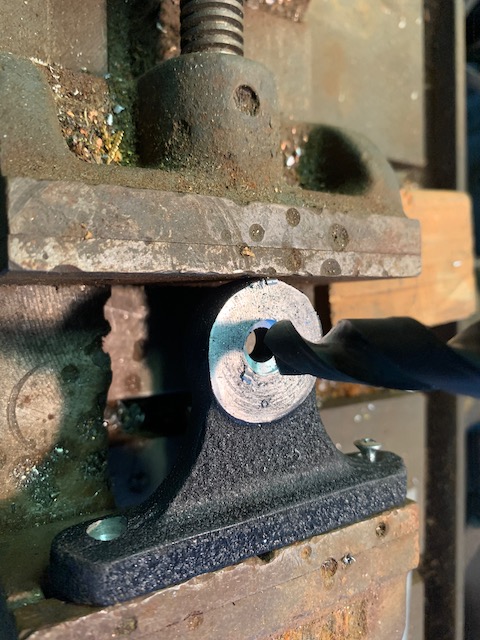 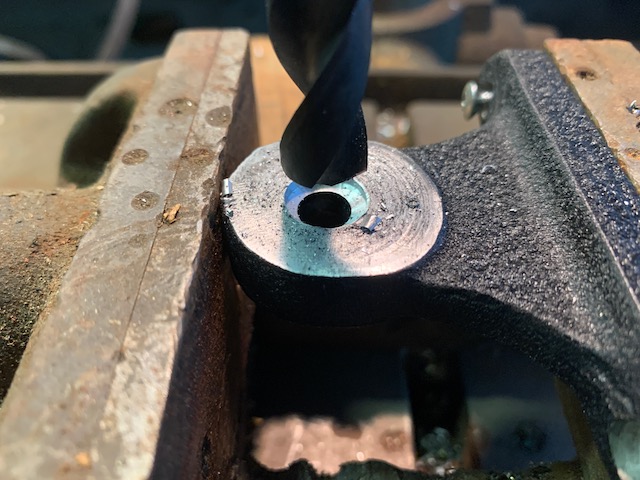 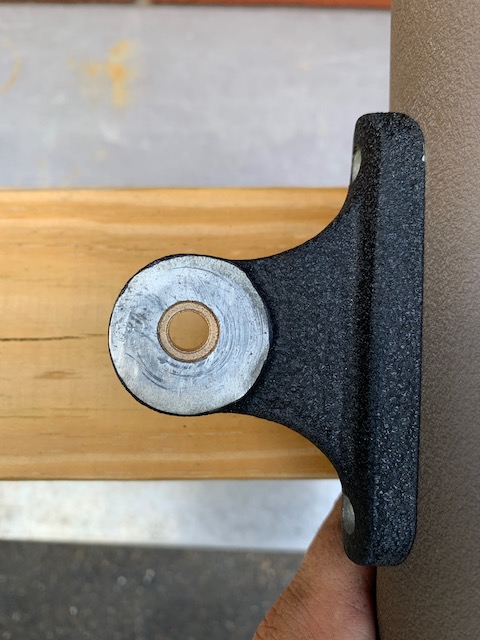 I did some general bird watching to test the fix.  Happy to say the fix is much better.

While I had the scope apart, I sprayed some chalkboard paint inside the OTA.  The original coating was "Thin" and there was quite a bit of reflection.  I was able to test the scope after the modifications.  Star testing was good.  I can't tell if the chalkboard paint helped considerably, but it feels like it helped.