57 replies to this topic

I got my start with the Webb Society and their publications back in the late '70's with the Deep-Sky Observer's Handbooks.  All of them are still great resources today - and I don't think there has ever been another book done on Clusters of Galaxies (Volume 5)*.

I agree Brent, I am glad I was able to get all 8 of the Deep-Sky Observers Handbooks and I do thumb through them frequently. I own several of Alvin's books in spiral bound and have downloaded what I could to my observing tablet good read while waiting for it to get dark.

I have been thinking about ordering more books from the Webb Society, especially the atlases and considered ordering the GOM. Funny thing was that I didn't order it because it only covers up to a certain date and the GOM is still going on so the book is dated when you get it. LOL Just my weird quirks.

well eventually there will be a second version of the GOM :-)

Many thanks to all those who ordered a copy of the Atlas, and to anyone who joined the Webb Deep-Sky Society. I've only been a member for about 45 years.

Brent's comments about Neckel and Vehrenbergs' Atlas of Galactic Nebulae (AGN) and the difficulty in finding objects is correct. There is no index to speak of, and the only way to find any particular nebula is to know its RA, and then thumb through the pages to find it.

Chart 167.pdf   406.23KB   48 downloads my Atlas I mostly used downloads of the Digitized Sky Survey (DSS) to determine the boundaries for many of the nebulae that appear on the charts. But there were occasions when I used the AGN. One such case was the Hourglass Nebula at the centre of the brightest part of M8, burnt out on the DSS images. It appears on page 27 of Volume 2 of the AGN, and measures 27 x 20 arcseconds. I have attached the page from my Atlas that covers M8. The position of the Hourglass Nebula is annotated on the chart - outside the cluster area.

I have to confess a bit of irony: the very first cluster I looked up in it was one I'd just transcribed my audio notes for--King 9.

This is my working solution to the indexing problem with the AGN.  I printed out the notes that came with each of the 3 atlas volumes (almost 200 pages and there are no page numbers, so don't drop the stack). 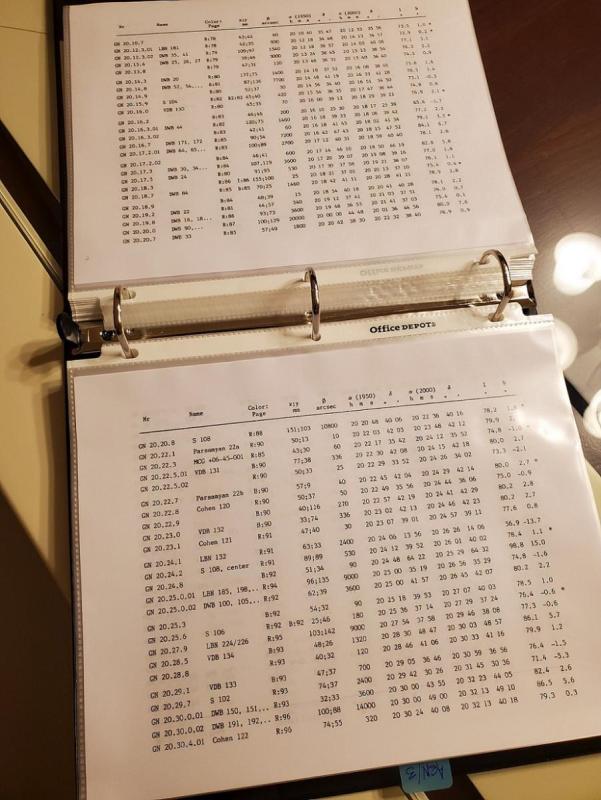 The GN numbers are created from the object's RA (1950.0).  The X:Y column is the distance in mm from the left and the bottom of the picture. 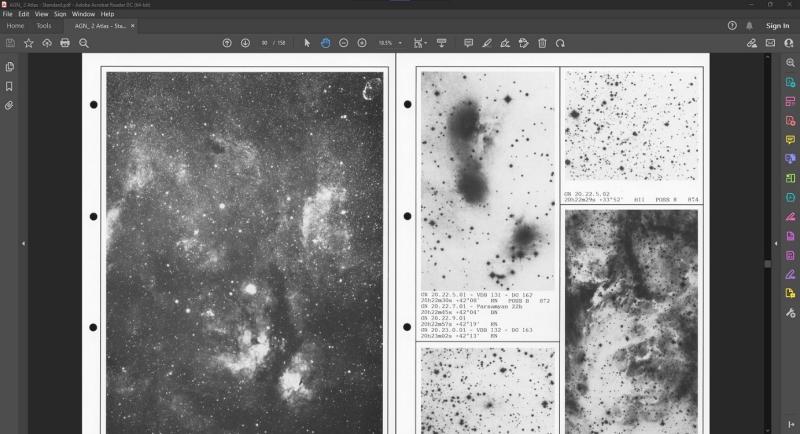 Using Parsamyan 22b as an example, its on page 90 and 57mm from the left side of the picture and 9mm from the bottom.  I use the zoom feature in Acrobat Reader to get to the scale of the original charts as close as possible, and then use a caliper to measure positions. Parsamyan 22b is near the top star in a line of 3 at the very bottom of the picture (north is up and east is left).  Certainly enough information to make a positive identification, but also a little work to get there...

Adding my thanks to Brent for this super-useful review, including the excerpt images that really help demo the nature of the Atlas. It's inspired me to send in a purchase request; and indeed, as others here, to join the Webb Society, whose membership and web resources look excellent.

I'm now on the hunt for a descriptive companion to the Atlas. Yes there are Burnham's, Luginbuhl & Skiff, NSOG, and Sky Vistas which could be mixed & matched; but something comprehensively focused on clusters? Archinal & Hynes' Star Clusters gets mixed reviews for this sort of purpose, although I may pick that up if/when it ever becomes available at retail again. Otherwise, it appears like perhaps printing and compiling all the Webb "Nebula and Cluster of the Month" articles would not be a bad start.

There is also the Webb Society's Handbook Vol. 3: Open and Globular Clusters.  Short field descriptions and sketches of 260+ clusters.  Archinal and Hynes' Star Clusters is very good, but here the descriptions of individual clusters are focused mainly on the history of the cluster designation, etc.

I split off Mike Swans posts on his Galactic Deep-Sky Charts project as I felt it deserved it's own topic in this forum.  Please continue the discussion there...


Also tagged with one or more of these keywords: Charts, DSO, Observing