Just another observation of M51

If you prefer to read it in PDF format with the support of some images that helps me to explain better myself you can check it in the web:

And please take into account those images are pictures not sketches. As you can read in my web they have been gathered from public databases, mainly from telescopes in Palomar Mountain, HST and Calar Alto (Spain). What I have tried (quite successfully, I think) is to reflect how the object shifts with the change of eyepieces. The images can become a composite of several to show a better result. Also I have added a fixed rectangle to show the effect of the apparent field of the eyepiece. I play a little bit with the brightness and contrast to show how your eyepiece field is darker at lower eye pupil, but you lose details in the object. I mean, if you try to find exactly the same picture in the web you are going to fail. It takes a couple of hours (sometimes more) to generate all the pictures to get the better result, plus an extra hour to write down my voice-notes.

Nagler 31mm (70x - 1º 10’ - 6.6mm). Being used to modest telescopes, seeing these objects in the 18" is taking my breath away. With this eyepiece the galaxies look quite small but you can see PERFECTLY the arm structure of M51. You do not need to use the lateral vision. It is obvious. The bridge that joins both galaxies is also visible although very faint. The central nucleus of both galaxies appears dotted, with a great brightness, and there is a fainter halo surrounding both galaxies. This halo shows a structure of a pair of rotating arms in the larger galaxy while the smaller galaxy shows no structure at all. There is also a star at 9 o'clock in the fairly bright galaxy that serves to frame the galaxy. One thing that is very much appreciated by me is the amount of field I see around the galaxy. At low magnifications the object stands out but it has a size that allows you to enjoy relaxed a poor background of stars that also highlight the beauty of the galaxy due to its loneliness. You can spend minutes and minutes in front of the eyepiece and not get tired of the view. I tell myself that it is almost better than any photograph for the feeling of realism that my mind generates. Nagler 22mm (98x - 50’ - 4.7mm). I am very surprised by the view I get of this object, used as I am to smaller apertures. I am freaking because the arms, it is not that I observe them perfectly, but they transmit me a beautiful sensation of volume. That is to say, I am able to distinguish the thickness of the arms, as well as the gradient of gradual decrease that exists between the brightest and the dimmest area. This sensation is overwhelmingly beautiful. It is because the area between the arms is itself shiny and, as I mentioned earlier, the change from one area to the other is not abrupt but a certain gradient is visible. In addition, the fact that the arms are so bright against the rest of the galaxy causes in my mind the image that they are emerging. Needless to say that the shape of the arms is perfectly reminiscent of a whirlpool (hence the famous name of the galaxy), as the two arms that I see make a 360º turn around the galaxy, it is this turn that conveys the feeling that the nucleus is immersed in the deep of the galaxy dragged by this whirlpool. Speaking of the nucleus, it appears very bright and punctual, and the birth of the arms is fully appreciated from the innermost part of the galaxy. I am also struck by a star in the galaxy itself that is obviously part of our own. Placed at 3 o'clock from the nucleus of the galaxy. Delos 14mm (154x - 28’ - 3mm). What detail you see with this eyepiece! In addition to the arms that are much better defined I begin to see more stars within the galaxy itself. Near the star I saw previously, I observe two more, one at 1 o'clock very close and another, a little farther away at 7 o'clock. Regarding the arms I begin to perceive some regions with higher brightness density than others, like clots in them. In particular in the area between the two galaxies, at 11 o'clock from the nucleus of the main galaxy. That is where the concentration of clots and brightness is higher than the rest of the arm. I further describe in my voice notes that the thickness of the bright arms versus the fainter ones is much less, about half as much. And it's not that the arms look small, it's that the space between them is very large in this eyepiece. On the other hand, the thickness of the bright arms is not uniform, there are areas where they narrow and others where they widen, but they never break. The nucleus has also gone from being a dot to a very bright sphere, it begins to acquire a sense of precious volume. The bridge that joins the two galaxies looks pretty bad, it almost seems to disappear at one point. The same happens with the end of the arm on the right side of the eyepiece, if you follow it with your eyes you have the feeling that it fades into the sky without being able to determine clearly where it really ends. Ethos 10mm (216x - 27’ - 2.1mm).  I thought I could not increase the beauty of the object but I was wrong. With the 10mm it increases even more the already described details of the galaxy. Unfortunately I do not provide more information about it but the image that is being burned in my memory is amazing. The structure of the arms, so well defined, their varying thickness, the difference in width with the faint and bright parts, the totally spherical shape of the nucleus, the clumps that are perceived here and there as major condensations of stars, these no longer from our galaxy but from M51. In short, everything is so overwhelmingly beautiful that I am almost speechless. I continue with the progression of my eyepieces to try to obtain more details but I am already totally satisfied with what I have observed in M51.

Ethos 8mm (270x -  22’ - 1.7mm).  UNBELIEVABLE!!! The best view of the galaxy without any doubt. In spite of the gained magnifications the galaxy gains in contrast without losing details. Right now it is pure delight to observe it. Only note that in the area of 5 o'clock with respect to the nucleus of M51 I see a new concentration of clumps. But that is the only thing I can add to what has been described above. That and the image is simply SPECTACULAR. It steals your breath away.

I think that one positive thing about using one eyepiece after another is that my eyes get more accustomed to the object and my sensation of perceiving more details increases. I don't know if it is a suggestion, but sometimes I have felt that it is not the same to see an object after going through several eyepieces, spending several minutes (three or five are enough) in each one of them, than to take the eyepiece that gives you the best exit pupil and place it so quietly. Or jumping from one eyepiece to another almost without realizing what you are doing. When I have done that exercise the image was always poorer than when I have spent my quiet time on each eyepiece. It may very well be suggestion but I confirm that the beauty, contrast, detail and wonder that an image of any object offers once you have gone through several eyepieces QUIETLY is not the same. In M51 I have only confirmed this impression because right now I can't take my eyes off my eyepiece, delighting with those twists of the arms towards the interior of the galaxy, with that well-defined volume of the arms that seems that the galaxy is going to emerge from the eyepiece. Simply overwhelming. 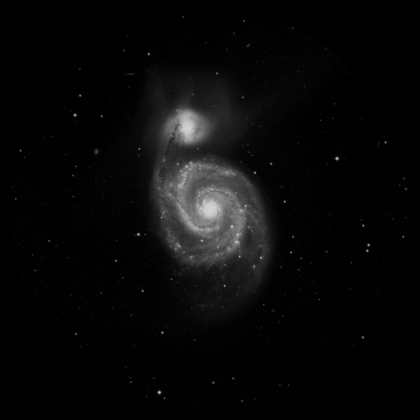 Delos 4.5mm (480x - 9’ - 1mm). HOLY MOLY! I was not going to place the 4.5mm because I thought that the brightness of the galaxy was going to decrease so much that I was going to be disappointed. I was so convinced that when I placed the eyepiece the first impression was: "what a pity, I have lost all the arms and I can only see the nucleus without any structure". Then I realized, fool of me, that I was not seeing the main galaxy but the companion. I moved the engines a little and VOILA, a HUGE galaxy with all the complexity of its structure just in front of my eye. With intense brightness, beastly contrast and very good definition. I almost fell off the ladder where I'm standing. To point out some new details, the nucleus has totally changed. Now it does not seem to be immersed in the galaxy but floating above it because it is completely surrounded by fainter areas. Note, not black areas like the background that can be seen outside the galaxy, but of a very pale gray that in front of the brightness of the nucleus pales even more and, therefore, the nucleus seems to stand out as a bright sphere floating on. The arms are perceived much better, they do not seem to be formed from the nucleus but from the side of it. They are so wide that I perceive incoming and outgoing in them. Say, the image of different thickness is now enhanced being able to see where there is less concentration of stars (or perhaps more concentration of galactic dust) that hides part of the arm and where these dust clouds are withdrawn showing a greater brightness. The clumps are now vastly more evident at 11 and 5 o'clock in the galaxy, and the width of the faint zone between the arms is enormous, especially at 12 o'clock in the core. I can't help but be amazed at the beauty I am able to perceive even with 1mm exit pupil and 480x in the galaxy. It is true that I have lost some details, especially I think the galaxy is smaller. For example, I lose the end of the arm that comes out of the 3 o'clock area on the side of the nucleus and goes around it until it reaches the region I have described of clumps at 11 o'clock in the nucleus. Before I think it reached almost to 3 o'clock again, outside the other brighter arm where the stars of our galaxy are. Now it disappears much earlier, about 1 o'clock or so. And overall it looks like the galaxy has shrunk in size. But the sharpness and the size with which I see what remains is AMAZING. It is all of such a brutal size that it seems unbelievable to me that I am looking at 35,000,000 light years away and the same in time. If it looks like it's just around the corner.

Wonderful, in all honesty. Fantastic report! I like your vivid descriptions of the object at different magnifications. Incredible sketches too


Also tagged with one or more of these keywords: Dob, Observing Report