The trophy cat's paw = region HII in the constellation Scorpius. Nebula at -36 degrees

.... BUT easy observation at 49 degrees north

4 months have passed since my last night spent at the eyepiece .... that's a lot (and not much at the same time), but it's my output frequency (!) BECAUSE .... you have to move a T760mm Dobson in a trailer, 15 km to a place with a very good SQM of 21.4 average peak in one night, count 3 hours of preparation (the program and all the stuff batteries, battery, "suitcase" of warm clothes, mosquito repellent , water, etc. for a night outside) telescope assembly included, and 2 hours in the opposite direction. And no wind (otherwise the 3m2 of the tube will turn into a pushing sail), And no major work the next day (!), And selection only of nights around the new moon, And with night weather with a clear sky all night .... In short," the sheep has 5 legs"; The winning lottery ticket

But then it devours the messiers and ngc until dawn ... which arrives very quickly very close to the summer solstice! I would say that the real dark night starts at midnight (so not mid-night since it starts ), to end at 3am. No stride lady night, great vacation to her ... Stress almost for the astram and all the stuff to make profitable  :-)

I had the impression that the northern horizon had a slight glow ("dark blue"?), signaling that the sun was below the horizon not far during those nights! (at 20 degrees below the horizon?, I didn't do the calculation)
It is however one of the rare nights where I very easily saw the teapot (Sagittarius) in its entirety, very easily, as one sees the Big Dipper! the same for Scorpio, where the main stars touched the horizon and were visible to the eye! (= the tip of the scorpion's sting, a "double star" separated by 1 or 2 degrees, lamda and nu of Sco.). probably a night in the coronal sky, when usually a "heat haze" (pollution, dust, air humidity) means that you have to look for/scan the low stars of these summer constellations.

I will only describe the best of my hunting picture of this night: The Nebula of the Cat's Paw (ngc 6334) -36 degrees in declination, and incidentally that of the Lobster (ngc 6357) -34 degrees and the pillars of creation M16 . Never in 40 years of astronomy have I tapped so low on the southern horizon. And it worked wonderfully, with  the eyepiece specialized in H. alpha regions/nebulae, OVNI  M (M for magic )  Night vision device  . I was very surprised and did not at all expect to see such a sight, but only whitish and undulating "dirty" spots at best. And effect "waah!" that I pronounced by the real very good SURPRISE of the visions procured.

The observations are obvious and .... stable, and are those that can be seen on the photos taken. Only downside, the flickering of the OVNI M eyepiece, due to this inevitable technology, but it is very often forgotten in front of the magic revealed by such a tool, which allows you to instantly reveal to the eyes, what the photos show . The simple screwed OIII or H alpha glass filters cause the same kind of annoyance, and we accept it without problem (green stars, extinction of the stars, etc.). I then went to see photos of the Cat's Paw, and found that it is identical to what I saw in the intensifying eyepiece. In detail near the exposure times chosen, variable, which will therefore show differences, sometimes significant, on the same photographed object, or the artificial festival of colors, becoming almost in bad taste, so much it is carnival, which I find more and more clownish... = I take revenge, because I always resent the very beautiful photos that I saw as a teenager, and at no time in the magazines of the time, were they warned that you can neither see its cloudy shapes, swirls, countless shades!! , nor the colors !! ). When I think of the Hubble palette (which I thought was serious, at the start of the 1st photos taken) = assign a color of your choice! , to each filter so that it looks nice, a real composition table, or to all the image processing, long, "photoshop", which negates these photos.

I'm a bit controversial, but at least it's said 🙂

Attached are the minute sketches of the 3 objects I made last night. Hoping to have shared with you some emotions / discoveries that I experienced last night

PS: With a lower diameter, and an NVD, the images will be smaller

I did not manage to put my 3 sketches 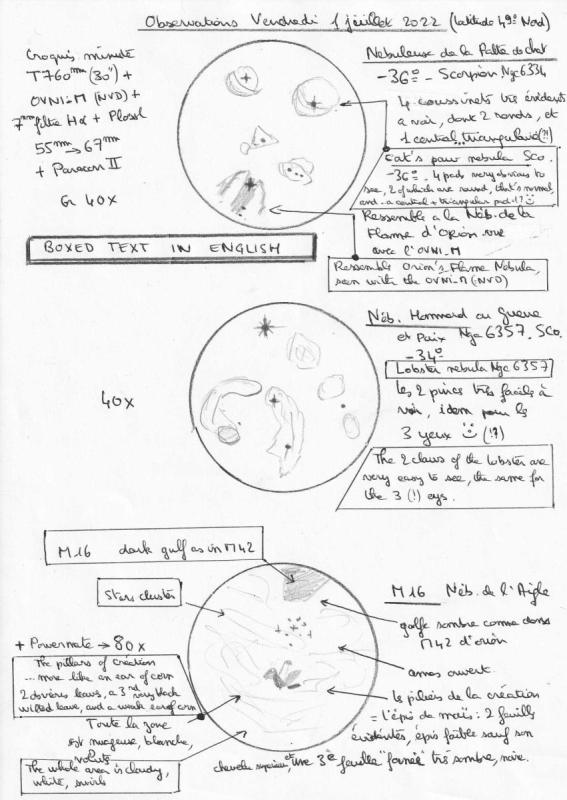