It's classed often as a binary with a composite spectrum: as a peculiar B2 dwarf plus an A2 supergiant shell star (implying a surrounding disk).

The star is now visible at my observation site, just a few degrees over the rooftops of my neighbour’s houses:

The spectrum, although recorded with my low resolution Star Analyser setup, is highly interesting: The H alpha line shows apparently a P-Cygni profile and some other lines of the Balmer series have apparently strengthened (H gamma is seen in emission ?). A comparison of my spectrum with James Fosters’ spectrum (AAVSO database) from last year illustrates the differences. A spectrum from the BeSS database, that was recorded 2 years ago, also shows a P-Cygni profile (see inset below http://basebe.obspm....hp?v_ids=230676). I could not find a more recent spectrum of ups Sgr to verify the validity of my spectrum (my insensitive, low budget system is prone to artifact formation: Debayering, rotating, stacking are sources of errors):

Are there other recent spectra of ups Sgr available?

The NIR region of the spectrum is "astrophysically" highly interesting:

The presence of Ca II triplet emission in ups Sgr presents an apparent paradox. The lines arise from the 2P to 2D transition (see Grotrian diagram below). The upper level (2P) is the same as for the H and K lines; the lower (2D) level is strongly metastable. The triplet lines are very subordinate transitions to the H and K lines (branching ratio 1: 38). The triplet lines themselves do not appear normal: all have similar intensities rather than the expected 2:18:10 (see inset below showing the Ca II triplet in standard array; the intensities in LS-coupling multiplets were taken from Allen’s Astrophysical Quantities http://minerva.ufsc....Chap/book04.pdf). This implies that the gas giving rise to the emission is optically thick to the triplet. A possible explanation is that ups Sgr showing Ca II triplet emission is indeed actually a semi-detached interacting binary. The source of the dense cool gas is the mass losing contact component and the Ca II triplet emission is probably produced in the very extended atmosphere by radiative de-excitation from the absorption by the Ca II H and K lines in the star’s photosphere.

The forbidden [Ca II] lines are rarely seen. They are also reported in the cool hypergiant IRC +10420 (see spectrum above for comparison from Robin Leadbeater, BAA database). The transition that produces the Ca II triplet leaves the atoms in the upper level for the forbidden lines. These atoms are normally collisionally de-excited back to the ground state that produces the H and K lines. Thus the forbidden [Ca II] lines are produced in a region of much lower density than is normally found even in the atmospheres of the most luminous supergiants (that we are dealing with supergiants is indicated by the O I line in the NIR; see for comparison the spectrum of Sadr (gamma Cyg) in the spectrum above). The [Ca II] emission may also be evidence of a hotter companion who is also responsible for the ionization of hydrogen (H alpha in emission!).

Some interesting literature on these stars:

I've found a short note in the "Astronomical Journal" from 1950 that reports on a similar outburst:

"A double, strong, deep absorption at Ha appeared sometime between July 9 and Aug. 11, 1949, at velocities of —285 and —314 km/sec, and was still visible on Sept. 10. No other spectral changes were noted. The outburst was not correlated with the primary eclipse and cannot represent flow of hydrogen from the primary to the secondary."

The velocity profile of the H alpha line im my spectrum shows a velocity of approx. -375 km/sec (see below). However, spectral changes (strengthening of the Balmer lines; see last post above) were apparently visible.

I put out a call about this on the ARAS forum and Guillaume Betrand has just come back with a high resolution spectrum of the H alpha region. 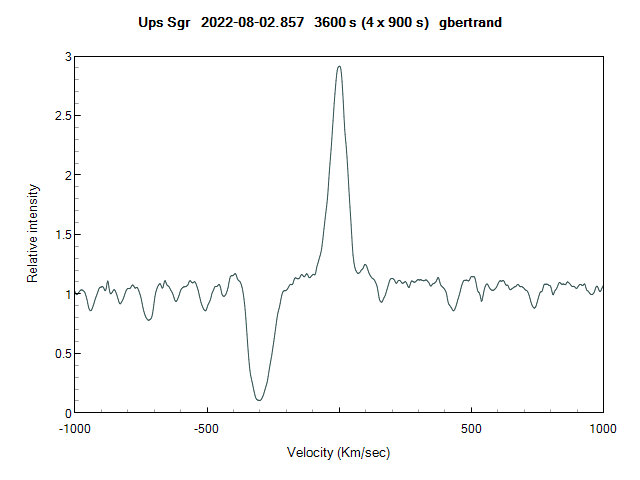 I put out a call about this on the ARAS forum and Guillaume Betrand has just come back with a high resolution spectrum of the H alpha region.

Thanks Robin for putting this on the ARAS forum. Great spectrum from Guillaume!

Perhaps this has whetted Juan Guarro Flo's appetite and he will record a spectrum with his Nou_T2 Echelle beast which covers the NIR region.

Last night I have recorded  an additional spectrum using a second order filter to "validate" the presence of the  NIR Calcium emission peaks:

Congratulations on winning the European Championship last sunday. The team of the Three Lions deserved it!

Congratulations on winning the European Championship last sunday. The team of the Three Lions deserved it!

Thanks! Perhaps they need to give the men lessons. 1966 is a distant memory now

The older ArasBeAm database offers the opportunity to scroll through the archived spectra and I could retrieve a spectrum of ups Sgr from 2007 which shows a similar line profile:

The data recorded by the ARAS ProAms and deposited in this database had been analysed by professional astronomers in 2012:

They came up with the following explanation concerning the very special line shape:

"Frame et al. (1995) also found a short-lived high velocity Hα absorption which was earlier explained by Nariai (1967) as being formed in a supersonic jet which is generated when the material is transferred to the secondary through the inner Lagrangian point."

​The paper by Nariai (1967) which contains an informative illustration is accessible via this link: https://adsabs.harva...PASJ...19..564N

Using the orbital parameters for ups Sgr as already published by Wilson in 1914 (Period 137.9 d / Periastron Passage JD 2419648.72) the high velocity H alpha absorption feature observed in Guillaume's and my spectrum is generated during an orbital phase of about 0.1 (see red line in the plot below taken from Frame et al. 1995):

Many observers have reported that this high velocity H alpha line appears during an orbital phase between 0.0 and 0.3 (blue section in the plot above which is near the Periastron when the stars are close together) as already pointed out by Nariai (1967). Apparently, the present outburst fits well into this scheme.

Hiya mwr , this is good stuff!

I've done a simbad quick look, looks like the primary is a HdC and the secondary an sdO in latest thought.  Hydrogen deficient I think are usually hot stars, unlike R CrB stars, as their evolution to low hydrogen is supposed to be that one star rips off the atmosphere of another and gets bloated up a luminosity class or few and carbon enriched, leaving being a hot subdwarf which is effectively the remnant nucleus of the other star.  In the massive case, as you mention, this might eventually lead to an SN Ia once the subdwarf cools down to being a massive white dwarf and the (super)giant star evolves and expands to red (super)giant stage.  This you'll have already read.  Interestingly though you never see this sort of thing mentioned much for Sirius.  The white dwarf (the Pup) orbit gets as close as 7 AU I believe, so it would have been heavier than Sirius A, evolved quicker, expanded quicker, got sucked onto Sirius A, enhancing Sirius A, and in time Sirius A will go red giant and get sucked onto it, but due to the masses if anything a dwarf or classical nova might eventually occur in the far distant future, or just two white dwarfs orbiting each other decaying via gravitational radiation at a timescale far longer than the age of the Universe so far, if not longer, so likely not to merge and explode.  Maybe become an AM CVn variable.  Of course, these are long timescales, and NOT a reason why Sirius was supposedly reported as red by some only a coupla millennia ago.

Anyway, this paper might be of interest, they did some spectropolarimetry, and will have links to more uptodate papers with models.

I don't think you've anything so far worth an MNRAS or A+A submission but I think you've got enough already to publish in something like JAAVSO or some other more serious level amateur journal that will not only be open access but will also be automatically linked into the ADS service.

Something of the ilk of "A Spectroscopic View of the 2022 upsilon Sagittarii Event".  I know it's easy to add them to databases and so on but you've done some background research and read up on it and taken some spectra by the looks and have an inkling of what is happening.  Any of your persnoal conclusions with respect to the data you're dubious on you just stick in a Discussions section before the Conclusion, just shoving the plain facts, data and figures in the results.  Abstract, Intro, Methodology, OR Intro+Methodology, Results, DIscussion if needed, Conclusion, acknowledgements (for used data sources or literature services), References.

You've got most of it already by the looks, although likely the event hasn't finished yet.

This object seems to be on a gradient of phenomena of compact objects with massive neighbours.  Extremest are HMXB, but look at cases like V725 Tau, where it is a wide but eccentric orbit neutron star along with a Be companion with a decretion disc that varies on a timescale and the eccentric orbit neutron star occasionally gets into sync such that every now and again periastron coincides with decretion disc expansion.  In that case the optical lightcurve of the variable can give a clue to when that is due, as the orbit is fairly well known, and the lightcurve fades during times of decretion disc enhancement.

Lovely stuff, I wonder if any of the pros have noticed upsilon SGR, this pro-am and multimessenger thing don't work as well as most people think, don't ya know.  Stuff needs to get out there, somehow.  See Robin Leadbetter and David Boyd papers, some at least in JAAVSOs for that latter, for look and feel and concept of spectroscopy papers.

I'm always nagging folk to publish.  It ain't no use to no beggar just stuck on a hard drive (or SSD for the pedants) or a database.