M92: a globular cluster in Hercules:

From Turn Left At Orion: “Almost anywhere else in the sky this would be considered a marvelous globular cluster; but, unfortunately for M92’s reputation, its nearby neighbor M13 has already appropriated the title of the Great Hercules Cluster.”   Permit me to disagree with at least part of that sentiment.  I’ll give M13 the title, but M92 IS a marvelous globular cluster regardless of where it is in the sky!!   And it’s also a poster child for an earlier thread in the DSO forum, which asked people how they ranked GCs.  Comparing these gems is like comparing Tom Brady and Aaron Rogers.  Don’t start!!  So much of it has to do with personal preferences and, given the unique characteristics of each globular, is nearly meaningless at the end of the day.  That said, M92’s compact core and unique pinwheel-like star chains put it on my list of favorites.

Observation: This was the last target of the night, and perhaps the best viewing conditions before the bright moon got up.  I think conditions were actually better than what I noted in my logbook and on the sketch itself.  What a gorgeous globular!   The core was very compact – Class IV – and distinct from the surrounding halo.  Many stars were resolved both in the core as well as outside it.  What kept getting my attention was the pair of star chains on either side of the core that curved outward almost like a pinwheel.  I looked at that feature directly and in AV to make sure I wasn’t imagining it.  There were other less distinct chains in the halo, some of which extended beyond it.  I was able to pick those out as well as the impression of a multitude of barely discerned stars in and just outside of the halo using the 8mm at 381x.  By way of contrast, using that EP on M107 earlier gave me nothing.  Those details were worked into the sketch, although the FOV is for the 13mm at 235x.  I did that to stay more or less consistent with all the GC sketches.  Apparent size difference is captured better that way, I think.  (Look at the sketch of M22 posted yesterday)  There was also a suggestion of mottling in several locations in the halo.  Nothing prominent, but a vague unevenness of brightness.  The starfield sported two very bright white stars, one very close to the cluster. There were also two prominent red stars, though not as bright as their white counterparts.  As with the bright white stars, one was close by the cluster and the other further removed toward the edge of the FOV.  Better optics than when I first saw it – see below – and certainly more experience in observing and sketching.  It was dazzling then, but my what a difference now!  I remember it being a wonderful view last fall, but definitely taking a backseat to M13.  Definitely rethinking that assessment!

Sketching: Mellish technique using white pastel powder on Hamilco 80lb black card stock.  Used the #8 mop brush with a moderate load of powder as this one is bright and compact.  The excess was disposed of by quickly turning the paper over a trash can.  I don’t like the streaks I get from blowing, especially with that much powder.  That still left the center bright, but not quite bright enough.  A small stipple brush built up the central core.  An empty medium round brush was used to blend and extend the halo into the background.  A soft white pastel pencil was used for the most prominent resolved stars.  I didn’t use the gel pen on those as I didn’t want to overdo it.  I think some of my previous GC sketches may have.  The remaining resolved stars were done with the medium and hard pencils, mostly the latter.  The hard pencil was also the pencil of choice for the outlying chains and the “shotgunned” stars.  The bright stars making up the prominent “pinwheels” were placed with the soft pencil, sharpened after every 2nd or 3rd star.  The bright field stars got a gel pen dot as well as halos, with spikes for the brightest ones. 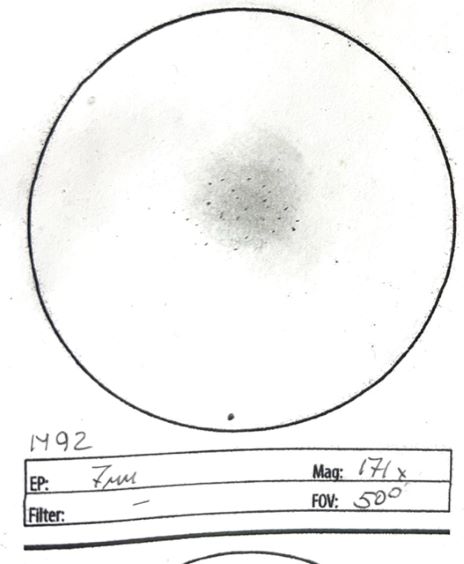 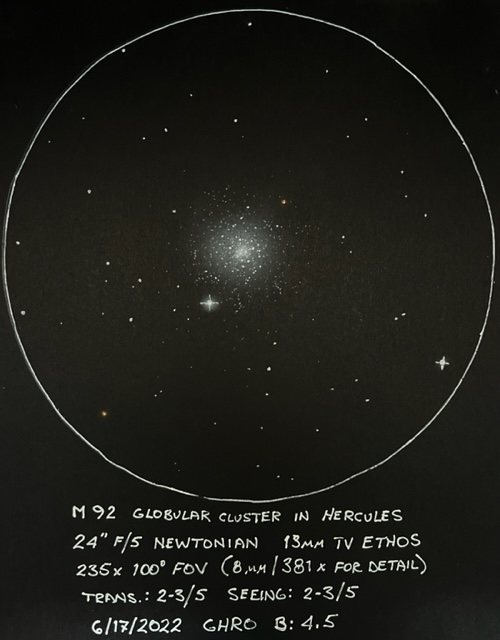 Very nice sketch of M-92: (A globular cluster in Hercules:)

Well done, the bright density at the core of this globular is what makes it so impressive.

Amazing sketch!  I also looked at M 92 last night and was amazed by the beauty.  M 92 is certainly smaller than M 13 and less stars are resolved, but there are some nice patterns in the resolved stars of M 92.

M92 is a nice globular cluster often overlooked because people will only look at M13.

You've really captured the dense core very well.  That is one of the surprising differences that I love so much about hopping back and forth between M92 and M13.

Also I must say, I love the level of description that you offer also for how you sketched it.  That is a great learning resource for everyone to spur new idea and to try new techniques!

M92 is one of my favourite globulars. Your sketch is excellent!


Also tagged with one or more of these keywords: DSO, Observing Report, Sketching