Anyone seen the Zeta Oph nebula?

I first learned of Sh 2-27’s existence quite a few years ago probably the way most of you did – some excellent, extremely wide-field image of the Sgr, Sco, Oph region. But I’ve never heard of any observations of it until I somehow stumbled upon Dr. Jiri Gardavsky’s drawing earlier this year (j.gardavsky). 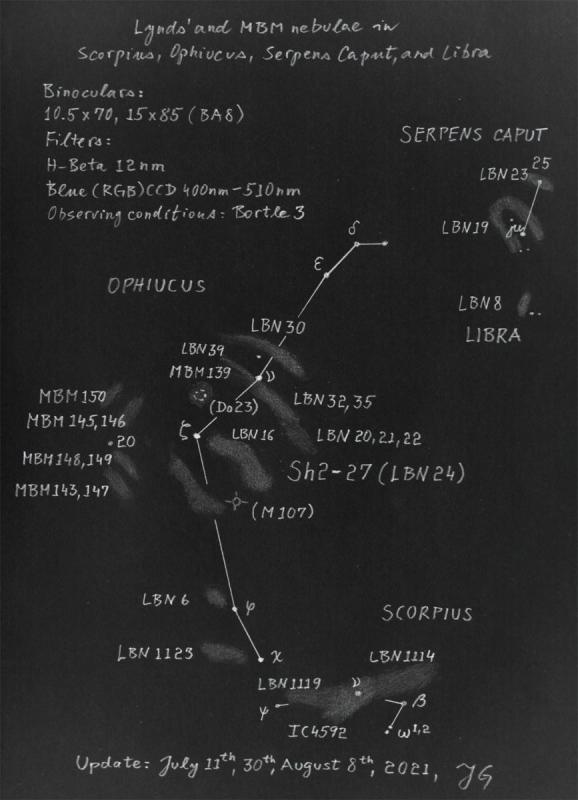 In January of 1952, while working together at the Yerkes Observatory, two young Northerners – Stewart L. Sharpless (age 25) and Donald E. Osterbrock (age 27) – got their The Nearest H-II Regions paper published. In it, they presented the results of their short Hα survey with the Greenstein-Henyey wide-angle camera, of which included some of the largest emission nebulae in the sky. Using a red filter and a Hα interference filter, they cataloged 16 nebulae, with all of them having been discovered previously…except for one. And that “one”, with an angular diameter of nearly 10°, is one of the largest emission nebulae in the sky. They found that it was nearly perfectly centered on Zeta (ζ) Ophiuchi and in their paper, undertook a quick comparison of it to that of the Lambda (λ) Orionis, which they had also photographed.

The next paper published about it, titled  A Description of Certain Galactic Nebulosities, was submitted for review in late 1954 by Morgan, Strömgren, and Johnson. Working at Yerkes Observatory but in conjunction with McDonald Observatory, they had  photographed several regions of the sky in Hα that they were interested in investigation further. They found the dimensions of the Zeta Oph Nebula to be approximately 7° x 10°, and included a surprisingly detailed image of it on both page 5 and 6.

In the first half of the 1950s, Colin S. Gum, working from Australia, created a catalog of southern Hα nebula that he had managed to photograph. A Survey of Southern H-II Regions was published in 1955 and included the Zeta Oph Nebula as Stromlo #73 (hereafter Gum 73). Four years later, in late 1959, Sharpless included the Zeta Oph Nebula in his second and final catalog. There it was cataloged as the 27 object (hereafter Sh 2-27).

At a distance of about 365 light-years, Zeta Oph (the third-brightest star in Ophiuchus) is a single, rapidly-rotating hot O-type star. It’s also a runaway or exile star (at least 25% of massive stars are ejected from their parent cluster) because it was actually born in the Scorpius OB2 association (Sco-Cen), which is the nearest OB association to the Sun and is composed of three subgroups (Upper Sco, Upper Cen-Lup, and Lower Cen-Cru). While Zeta Oph is only about 3 million years old, it’s been theorized that for the first half of its life it had a more massive companion. But then the “primary” was destroyed in a Type II supernova, possibly pushing Zeta Oph on its current course. 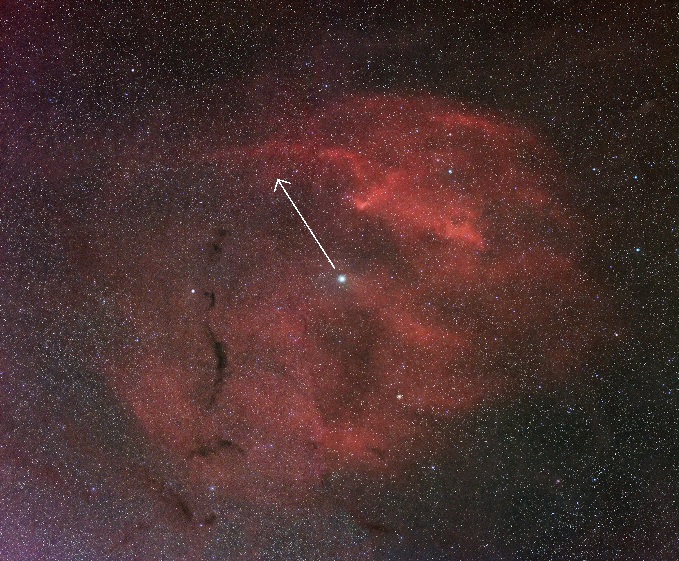 In the image above by Naoyuki Kurita (which I got from https://stellarscene..._e/zeta_oph.htm), you can see that the nebula is structured while there are dark nebulae in front of it (the white arrow indicates the direction Zeta Oph is travelling). Because of how much energy Zeta Oph is putting out, it’s ionizing a density-bound H-II region around itself. Along with that, kinetic energy is generated in the surrounding Interstellar Medium (ISM) from the H-II region’s expansion at a rate comparable to the mechanical luminosity of the stellar wind from Zeta Oph. The reason the H-II region around it has remained quite spherical is because it’s always dynamically young, in contrast to the often-complex shapes of old H-II regions around static stars. In the infrared wavelength, a distinct and impressive 1/2°-long bow shock is visible due to how fast the star is moving the dust-rich environment above the galactic plane. Interestingly, against the odds, astrophotographer Mathew Ludgate managed to get the bow shock to show up in an image he posted last year on AstroBin. He coaxed it out by focusing his efforts on the feeble amount of O III emissions produced in the bow shock.

Sadly, I’m not smart enough to be able to write anymore than that. However, I’m sure CN members Rudy Kokich (rekokich) or Steve Gottlieb (sgottlieb) could’ve done a lot better. In fact, I’m going to push Jeff Kanipe (author of Annals of the Deep Sky) to do a write-up of Zeta Oph if more people (or at least myself) are able to glimpse its nebula in the next few years (best to do it before he gets to “O”, folks!). So, as they say over at DSF, "Give it a go and let us know"!

P.S. I'd like to thank my friend Jiri for his help in compiling this report.

Thank you for your interesting article!  I was planning to observe Sh2-27 this summer, when comet C/2017K2 was somewhere in the vicinity. However, due to cloudy skies I couldn't make it and later on it was too close to the horizon. So I'll try again next season.

For larger apertures the field of view is probably too small to see the whole structure, but I wonder about the observability of some clumps in the northern third of the nebula that can be seen on the image in your post (LBN 20/21, 30, 35).

I take it this is a very dim nebula. SkySafari has little information. What would it compare to in surface brightness? 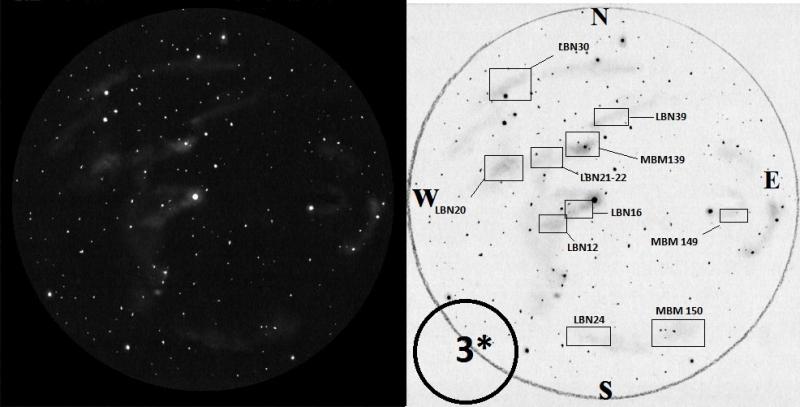 I take it this is a very dim nebula. SkySafari has little information. What would it compare to in surface brightness?

The Sh2-27 appears through the binoculars to be comparably bright as the IC 4592.

It can be found on page 67 of the IDSA atlas by Ronald Stoyan and Stephan Schuring.

The authors recommend an UHC filter.

IDSA has been published in 2013 by Oculum Publishing House in Erlangen, Germany.

I have seen the Sh2-27 when chasing Scorpius and western Ophiucus, the first time on the 12th June 2013, Ciablun farm, Alta Badia region, Dolomiti Mountains, Italy,

through the 10.5x70 binoculars without and with the UHC filters, under the Bortle 2 skies.

With such large-scale objects, the rule
.field of view (min 3*)
.exit pupil, not less than 6mm
."crystal" transparency

In April 2008 I imaged Sharpless 2-27 under dark skies in Eastern Maine.  I've never attempted to see it visually, though objects such as Barnard's Loop and the California Nebula are not difficult targets under my Bortle 2 conditions. Sh2-27 should be visible with wide field optics, such as a moderately large aperture binocular. 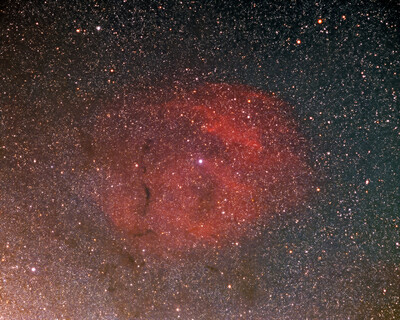 The area is moderately rich and instruments should reveal numerous dark nebulae within and around the complex, especially the southeastern region. The Milky Way thins on the opposite side of the nebula.
I'll likely make a visual attempt next season.