ive searched and cant find. totally new to this and collimation question on 9.25

Totally new to this and a little lost. I was given a 9.25 from my stepfather who took immaculate care of not just this but everything he owned in his life. Im fairly mechanically inclined and work with my hands everyday. After owning this telescope for several years since new my stepfather decided to remove the corrector plate to clean it. He was an electrical engineer and meticulous with everything. Photography. Audio systems. Computers etc. A brilliant man. But he unexpectedly died from complications from parkinsons just after giving this to me and Ive passed it along to a close friend who I thought could/will use it and care for it better than i will. I did a member search here and not sure if he ever joined or posted. But Im pretty sure he lurked.

We were able to get the pitch and thread length for the retaining ring fasteners for the plate that he misplaced. We finished cleaning the plate and reinstalled it but of course were not able to collimate. We approximated the shim location to center the plate in the tube. We never accomplished collimation this way. So we removed the plate again, cleaned dusted everything with canned air and alc water and clean pads like weve seen recommended  and did a "daytime" by eye collimation. which seemed to get things lined up pretty well. We never removed the secondary mirror or disassembled anything further than just having the plate and mirror assembly removed. Ive scoured through here for hours looking for answers but...hehe....theres just way too much info to sift and i could not find any info on what our results are.

Ill attach the iphone photos of what we were able to accomplish but very obviously there is still something way wrong. So looking for a general direction to go. As can be seen there are no rings. Only lines. I have a feeling we are very close but focusing seems to do no good. After asking around the consensus is we still have the plate installed incorrectly. I did find that there is an index mark on the plate that should be at 3 oclock on the tube as you look into it from the plate end. We have that. We have removed the diagonal to eliminate that as a variable. Its escaping me but I believe we got these results with the 40mm eye piece but i dont think that should matter.

Any direction and brief explanation (explain it like youre explaining to a 6 yr old please) would be super helpful. We are very much looking forward to getting this back up and running again without making a trip with it to california. :-)

Also, we are in baltimore, md usa. So if there are any folks around who would be interested in helping out locally, that would really kick ****. And hey, a pizza and a couple of beers would be definitely worth it to us!

thank you and this place is really great.

i should add, We tried to collimate on jupiter. That photo was the result. Here is a photo of our by eye daytime collimation attempt. Thanks again!

Did you try to focus Jupiter?

Best photo we could get of jupiter. I know i have seen saturn clear as day through this scope. So i know something is wrong.

Did you try to focus Jupiter?

just attached the best focus we could get. its always blurry. but this is leaps and bounds over what we initially were able to accomplish. I believe this is with the 40mm eye piece without a filter.

Jupiter is just too big & bright to get anything other than a very rough collimation. What looks centered by viewing jupiter racked far out will not give you the true state of the collimation.

You need a good steady night. Point your telescope at the zenith and select a star that is not blazingly bright in your eyepiece & centre it. You need to be using a very high powered eyepiece giving you around 40-50 magnification per inch of aperture.

If you focus carefully at high magnification you will be able to see the secondary shadow & airy concentric rings. Moving the shadow to the centre of the airy rings by very carefully using the adjustment screws on the secondary mirror housing is the objective (only very tiny iterative turns of the screws- if one screw is too tight loosen the opposite screw and never loosen more than 2 screws at once).

Always center the star after any movement of the adjusting screws as collimating off axis can produce a bad collimation.

If the secondary is centered in the airy rings and you still get a comet tail on sharp focus then the issue lies outside of collimation and you may need to experiment with rotation of the corrector plate or send the telescope into Celestron for collimation on their rig.

When you put the corrector (with the secondary housing) back onto the front of the OTA, were there alignment marks on both the corrector and the OTA to help ensure you got the rotational aspect spot-on? This can matter a lot.

You will not be able to collimate on Jupiter as it's not a point source.  Pick a 2nd or 3rd magnitude star instead. And make sure it's not a double.  There's an excellent (free) tool to help with collimation - MetaGuide. It's worth downloading and experimenting with once you think you're close.  When you think you're close, MetaGuide may surprise you by informing you you're not really that close after all.

When you put the corrector (with the secondary housing) back onto the front of the OTA, were there alignment marks on both the corrector and the OTA to help ensure you got the rotational aspect spot-on? This can matter a lot.

You will not be able to collimate on Jupiter as it's not a point source. Pick a 2nd or 3rd magnitude star instead. And make sure it's not a double. There's an excellent (free) tool to help with collimation - MetaGuide. It's worth downloading and experimenting with once you think you're close. When you think you're close, MetaGuide may surprise you by informing you you're not really that close after all.


Thank you. Only found that the mark should go in the 3 o'clock position so we will look for a corresponding index mark. That I think would resolve the tails.

I don't believe corrector rotation is going to cause the vertical lines you see. The only affect the corrector orientation should have is spherical correction. More likely there is something in the light path, say a window screen or similar. Did you collimate from indoors or outside under the sky clear of obstacles?

Besides, you shouldn't collimate on Jupiter. Especially at that amount or defocus. It's just not accurate enough. Use a star at relatively high power and much closer to best focus to get closer to collimation. Get that far, first, then check back.

Another possibility, but rare, is the glass could have some serious striations. But that's not related to collimation. You could see if those lines rotate with the corrector or not. Then reorient the corrector back to the alignment marks.

Yeah. Will rotate the plate to see if the lines move next time..we were chasing so many things and talked about it but didnt. It was open sky.. for a moment I actually thought it was just a really bad image of jupiter. Hehe.

This gives us lots of things to chase down..confirms a few things, and helps give us a direction. I'll be sure to post results. We're very motivated to get it going and we'll send it back to celestron as a last resort. Hoping someone will chime in from Hopkins here or something. We're getting into such perfect weather for it! So very excited.

But I think first a redo on the star collimation. After checking for index marks. I know it'll be worthwhile. We've become really good at taking it apart at least. :-)

I should have posted here before even starting this process.

Those lines are indeed very odd. I wouldn't expect that with the corrector moved from the wrong position, so something is out of whack. Can you see those lines visually when de-focused?

In any case, you will either collimate using some software or go the manual route. Manual is quite doable, but can be tedious, especially with larger SCTs and with poor seeing.

Point the scope at polaris on a steady night, and you are going to need a high power--5, 6, 7mm someplace around there.

And then follow these collimation guidelines by Rod Mollise. The first two steps are rough collimation, the only difficult step is getting fine collimation where you get the diffraction pattern around polaris.

Your way of on collimation from looking at your fan tails of Jupiter's moons.i think celestron site will have proper collimation instructions

OK, to collimate, chose a fairly bright star (Polaris works for this) and crank up the power to around 30x per inch to 40x per inch of aperture (for a 9.25 inch, that would be from 278x to 370x).  If you have some astigmatism in your eye, you will need to keep your glasses on to prevent your eye's aberration from interfering with the collimation.  Center the star in the middle of the field of view and focus as best you can.  Look at the image of the star.  If it appears somewhat flared in one direction, you are out of collimation.  Start gradually and slowly adjusting the collimation screws on the secondary mirror to make the star image appear to move towards the edge of the field in the direction of that flaring.  Once at the edge, move the telescope to re-center the star's image.  If it is still flared, then adjust the secondary screws again to move the star image towards the edge, and then move the scope again to re-center the star in the field.  As you do this, the star will look less and less flared, and eventually, it will look fairly round.  Once it does look pretty round, you are collimated.  See the diagram below (this is what you would see if the seeing was perfect, but otherwise, just look at the best focused blur of the star and watch for the flaring): 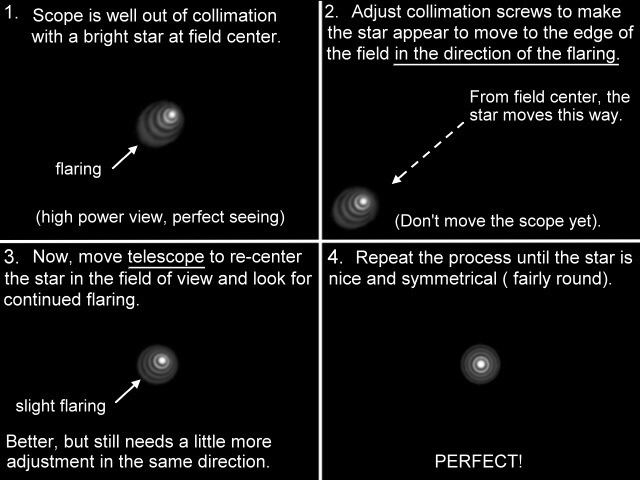 Well how about an update?