I originally purchased this mount on CN Classifieds.  The first night I used it I didn't have time and the cable for a polar alignment that week, but a 3 star alignment - with the mount body pointing true north using a cell phone ap - worked beautifully.  I kept it out there for the first two weekends then it was time for mowing, so I took it all down.

When I next had time and a good sky, I had decided already to move from that location to a more level location.  I set up concrete blocks, leveled them and started over the correct way, only now my mount never finds anything properly anymore.

The GPS is working properly, and I had to reset -360 for Central time zone (I am in East Texas) and the polar alignment is set perfectly with my laptop according to the program now.  But something is really going wrong because the hand controller is not moving the scope properly anymore.  It is just very very strange....

The cursor buttons on the hand controller - they seem to now move the scope in the opposite direction from where they are supposed to - and at an angle~!!!  When I set up the polar alignment and try to slew, the first object I pick to slew to will be (or is supposed to be anyway) close to where the scope sends you.  Then you then are supposed to be able to final adjust the location in the viewfinder/eyepiece and push "enter" when it is centered....   right?  Not for me.

At that point when I have to final adjust, the objects I pick are now many degrees away from where the mount sends the scope.  And when I push the right hand (>) button the scope goes downward and to the left.  Almost like both motors are running, slewing the scope in the complete opposite direction and at a downward angle from where it is supposed to go.  So I can never find the object or star anymore because - well try to push the cursor and have the scope go in a completely non-intuitive direction and find something~!  Impossible and extremely frustrating.  I finally gave up the last three nights because no matter how many times I completely start over or even completely clear the information and start from scratch...  it always did something like this.  The scope doesn't move in the correct direction with the controller.

The north arrow in the mount is where my scope points.  I start in the zero position, which is my manually entered park position.

Last night the same thing from scratch again, and it all occurred again.  For some reason the slewing - using the hand controller to adjust where the target it - its just not working properly anymore.  That is keeping me from working with the mount actually.

Again, the first nights all I had to do was a three star alignment and the scope could find anything afterward flawlessly after the first few tiny final adjustments on the first and second objects.  I could easily push the cursor arrows > to go right, < to go left, and ^ for up etc.

Pushing the arrow buttons > and having it go the opposite direction and at an angle is just frustrating as heck~!  I now give up because easily because I already know how screwed I am because of the first few nights - I spent hours out there trying to find out what the heck was going on.  With the cursor not working there is simply now way to fine adjust anything, even the star alignment anymore.

I have set it all up several times, performed a full reset of the mount from scratch, and it wants to go in a different direction from the arrows when fine tuning.

Can you imagine trying to do a fine adjustment with the scope going a completely different direction from the arrows on the remote~!!!      AAAArrrrgggh...!

Since I moved locations it has never worked properly again.  And I cannot figure out what I did wrong.  I've read the manual now to where I almost have it memorised.  I don't understand what I did.  I know I parked the scope at the end of the last session, and every session prior before I moved.  I have my zero position entered as my parked position manually too.  I hope that isn't it....    because if it is I may never find out how to reset any of this.

The instructions in the manual are actually fairly horribly written if you are trying to figure out a problem.  I may have purchased the wrong mount I guess.  I hope someone can please help me~!!! 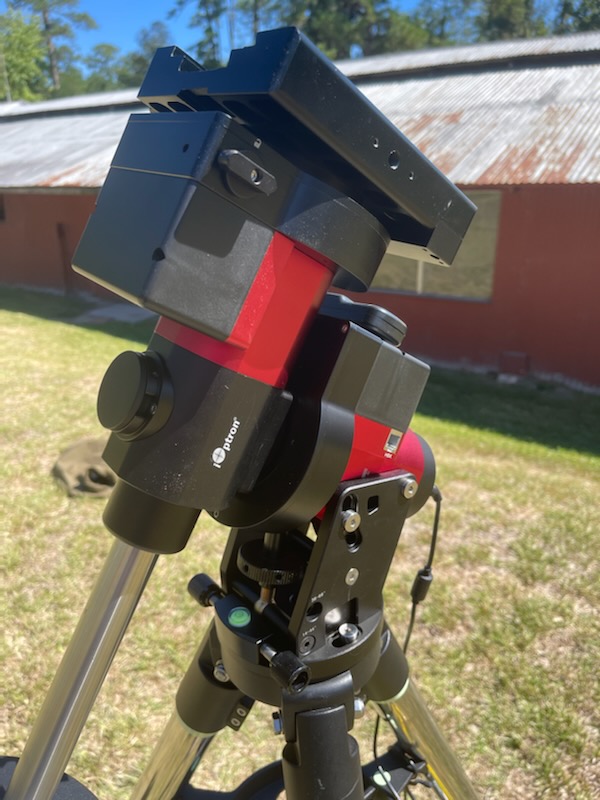 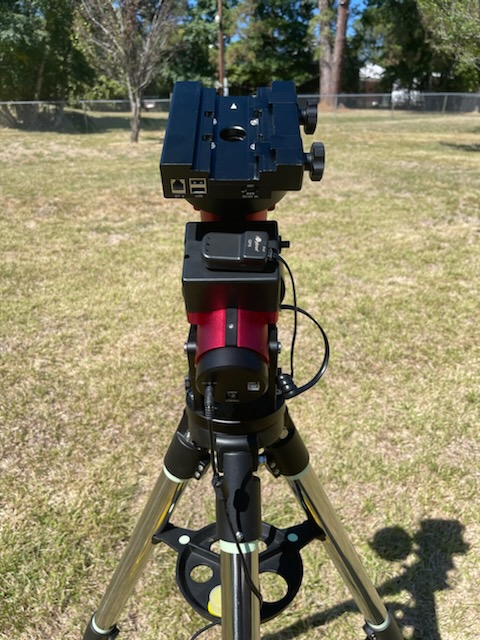 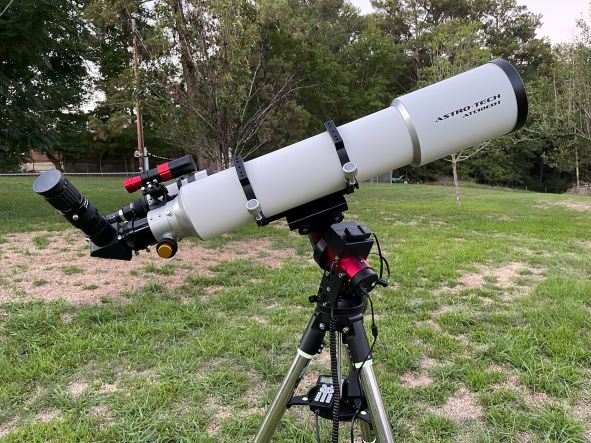 Here's my setup on blocks, sans scope, ready to start over tonight if someone can help me.  Otherwise, probably going to give up.  Tonight, last cloudless night for the next week unfortunately.  Next week we are back into the 90F's 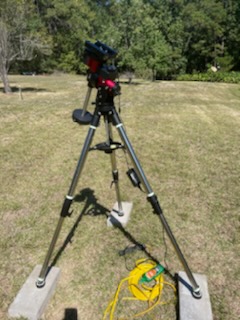 Is this the first computerized equatorial mount you have used?  It is common for the arrows to seem to be backward.  Each of them should rotate the telescope about one of its two axes.  If it's really slewing on a diagonal, then both motors will be running at once, which is not a normal thing.  Normally, the mount slews along lines of declination and right ascension, which *are* diagonal relative to the horizon.

Here is my GEM45 setup procedure, explained more clearly than iOptron does:

Here is my GEM45 setup procedure, explained more clearly than iOptron does:

Is this the first computerized equatorial mount you have used?  It is common for the arrows to seem to be backward.  Each of them should rotate the telescope about one of its two axes.  If it's really slewing on a diagonal, then both motors will be running at once, which is not a normal thing.  Normally, the mount slews along lines of declination and right ascension, which *are* diagonal relative to the horizon.

Right, I understand that.  But it seems that it is running on both axis at the same time when a single button is pushed.  That is what I was talking about.  I will try again tonight to see if both axis are turning with a single button pushed.  In fact when I set it up I will look now before it gets dark.  This is what I was experiencing though.  You can hear the difference, like two buttons being pushed, and both motors running.  Strange.  I am resetting everything again once it gets dark if I can see it is still doing this.  Thanks again.

I figured it out.  With a little help from Michael also.  Thanks Michael.  I had to move again before setting up.  There were some trees that were slightly in the way after realigning my mount that I thought the iPolar was clearing because I could not really see them in my main scope, but could in my new alignment scope.  Thankfully I started trying to set up early enough to where I could see them momentarily during my polar alignment.  All very rookie mistakes.  So I stopped, moved and started all over again.  Immediately I started getting a LOT more stars and everything went much better.

I also figured out that even though my mount was well balanced, I had too much weight on it with the AT130EDT and the AT80EDT at the same time.  You see...  I cannot use the AT80EDT with the iOptron mount because the rail it comes with allows the focus knobs to encounter the mount base when trying to use it alone.  That also was causing problems and I cannot believe I have to purchase additional gear to use the AT80EDT on the GEM45 alone.  I like using a 2" eyepiece when doing visual and apparently it's too heavy and makes you place the scope too close to the mount plate.  Using a 1.25" gives you barely enough room to clear the focus knobs.

So the only way to use it was mounted on my AT130EDT.  But that rig is too heavy for the mount with two 2" eyepieces and apparently the motors and mount struggle to keep up even though the added weight is nowhere near 45#.  Either that or it is already having problems.  Hopefully not having the weight of the diagonals is going to allow me to use my new camera gear.  If not I am going to have to sell the GEM45 and purchase a heavier one?  I think I am going to go with a different brand if this happens.  Too bad, the mount is easy to use as long as you don't exceed 30#.

At least everything works great with the 130 alone.  I left it set up and will go back later tonight when the Orion comes out above the tree line, about 2am~!

Glad some of my suggestions were helpful.  I have never used more than about 25 lbs. on my GEM45 but it did not seem to be struggling.

The two motors running at once -- that's strange.  Of course, when you tell it to go to an object, it uses both motors.  But when you press a button, it should only use one motor.

Query: What kind of power supply are you using?  I wonder if the mount is not getting enough voltage.  Acceptable input is 12.0 to 14.0 volts.  Crazy behavior is sometimes caused by insufficient voltage.

And crazy behavior when slewing with a heavy load suggests the voltage is sagging when the mount draws a lot of amps.

Moving to Mounts forum for a better fit.

I cannot use the AT80EDT with the iOptron mount because the rail it comes with allows the focus knobs to encounter the mount base when trying to use it alone.  That also was causing problems and I cannot believe I have to purchase additional gear to use the AT80EDT on the GEM45 alone.

Is it possible to rotate the telescope so the focuser is up when the mount is in zero position? I do that with my Sky Watcher 72ED, but I do astrophotography. Maybe moving the finder dovetail to the telescope rings?


Also tagged with one or more of these keywords: Mount, Polar Alignment, Refractor, Equipment