I have a 20" x 20"wall mounted Home Depot LED light that is mounted about 2.5' away from my 10" GSO R/C. I pointed the scope at the non adjustable light source as best I could. I'm hoping someone could check the following image vs. the Sky Flat I took with the same scope to see if it may be an acceptable substitute. I will start experimenting more and more, but someone who knows what their looking for sure would be a great help. 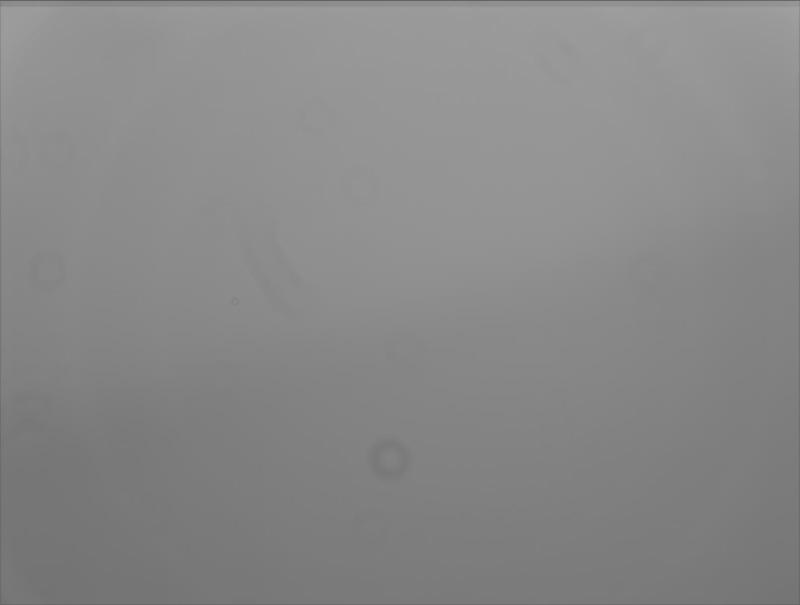 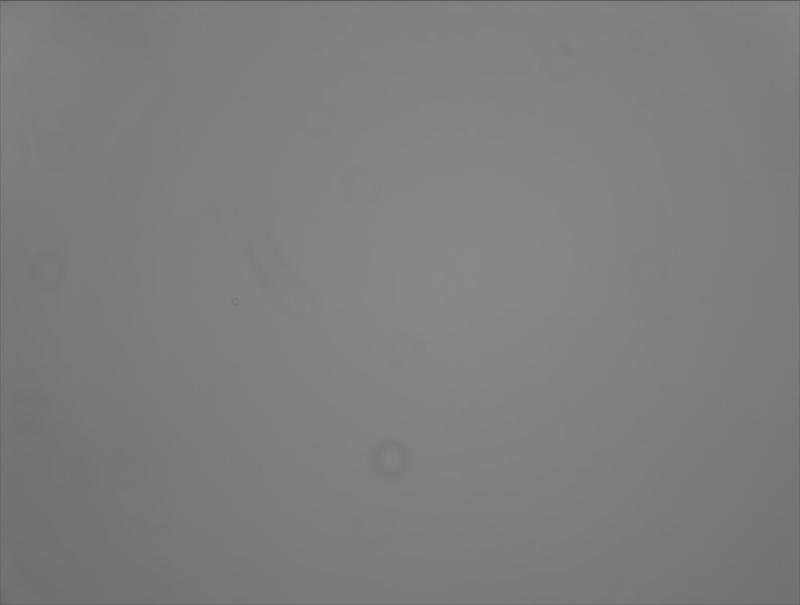 What exposure time did you use for the wall flat ? I see a darker bottom half with a tilted separation. Could it be that you exposed really brief and that you're looking at a refresh or something ? If so dim the panel with something, some clean paper sheets should work already and expose longer.

And what's up with the top ten or so rows ? It's in both flats but more noticeable in the wall flat one.

It is pretty easy to compare Flats using the same software you use for image processing. You simply treat one of the Flats as if it were an image. (Just think of it as an image of a flat blank illuminated wall which it is.) You then perform a Flat Field Calibration using the other Flat. I did the following in PixInsight.

Important! I am assuming that each of the Flats you showed in your post were Master Flats which had been calibrated and then stacked. If they are raw single uncalibrated Flats right out of the camera, then things could be very different although the analysis procedure would remain exactly the same. 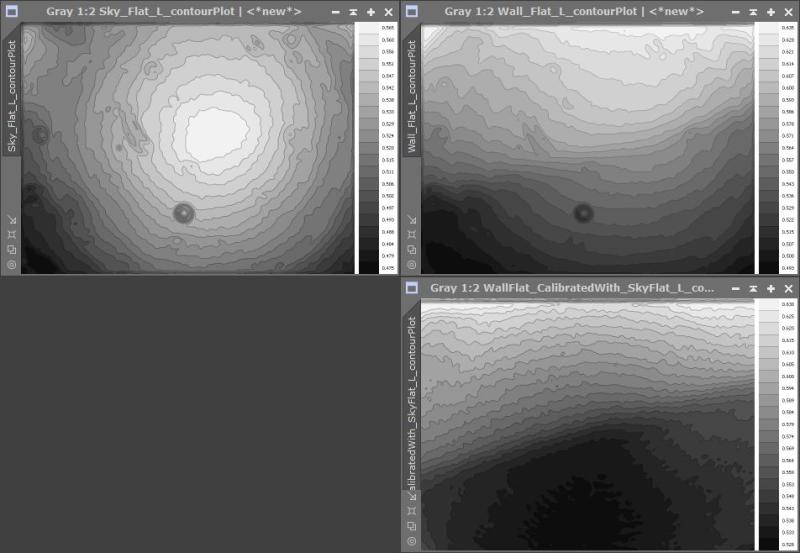 The first row depicts the brightness profiles of you Sky Flat (on the left) and your Wall Flat (on the right). As can be readily seen, the Sky flat looks just like you would expect a flat to be. It shows the dust motes very clearly and also allows you to see the contours of brightness caused by vignetting in the optical system. Other than being slightly off-centered, it looks perfectly acceptable. The off-center nature is probably real and may represent either a very slight off-axis collimation error or tilt at the focuser (which is pretty common). It is sight enough not to be a concern.

The issues that @lambermo described above are very easily seen in the Wall Flat brightness contour plot on the right. There is a brightness gradient from roughly bottom to top. In addition, there is a very abrupt slightly diagonal gradient in the lower portion of the Flat. That may be shutter sweep if your camera has a built-in shutter taking a short exposure or it could be from uneven illumination within the light panel itself.

The second row of the attached image shows the brightness contour plot of the "flattened" Wall Flat. In other words, this is what you get when you flat field calibrate the Wall Flat using the better Sky Flat. In PixInsight, this calibration was done in PixelMath using the standard flat-fielding equation:

You can do this operation in any software by simply loading the Wall Flat as if it were a Light frame and then running an Image Calibration using the Sky Flat as your Flat. You do not need to supply a Dark frame at all since the both Flats will have been previously Dark or Bias calibrated already. Ideally, the bottom row image should be close to be very flat and evenly illuminated. It is not and that is a problem. The brightness contour scale at the right shows the "Flattened" Wall Flat to have about 19% illumination difference across it compared to the Sky Flat.

I would say that you need to investigate a little more to find the reasons for the issues with the Wall Flat before using it to calibrate image data.

Those posts are very informative. I am glad to see the optical train itself appears to be in fair condition. A Cloudynighter came over a while back and helped me collimate the scope. Before, it was terrible! The shutter on the QHY9 was taxed in both flats as both were less than a second in duration, and really, I could have stacked 10 subs before I presented them here. I’m going to add some paper towels over the light source, but also a DIY closing flip flat type unit is something that is interesting, as it would keep the optics cleaner and provide an even light source.

Thanks for verifying that you were using a camera with a mechanical shutter. That may be the bulk of the issue with the Wall Flat darkening. If you can cover the lighting panel with something translucent and white, that will allow you to use longer exposures that will help alleviate the shutter shadow. I did not notice it is the Sky Flat but it stood output in the Wall Flat, probably due to more light output than the Sky.

Once you can dim down the panel, you can use the "mutual / self calibration" method with you favorite software to make a similar comparison yourself. Once the master Wall Flats starts to look a lot like your Sky Flat shown here, you should be good to go.

You can also start using a combination of Wall Flats and Sky Flats once you get the light panel and shutter speed issues squared away. Search for a presentation by Fabian Neyer presented at the CEDIC in 2015. He includes a method to take advantage of Sky Flats all the time. He takes Sky Flats occasionally and then uses them to pre-calibrate Wall Flats or other types of Flats. The Sky Flat essentially is used to correct for known errors in the Wall Flats. You can then take Wall flats for each session, process them, and still get the advantages of Sky Flats until such time as you change the optical system configuration.

I added sheets of brown paper over my wall flat light, and I am getting 1-2 secs on luminance flat exposures and 10-12 seconds on HA flat exposure times. That is where I want to be to avoid mechanical shutter issues.

Now, since I put so many layers of paper on, the light is no longer white….it is reddish. Will this cause problems?

I will try the light dimmer switch route.

I added sheets of brown paper over my wall flat light, and I am getting 1-2 secs on luminance flat exposures and 10-12 seconds on HA flat exposure times. That is where I want to be to avoid mechanical shutter issues.

Now, since I put so many layers of paper on, the light is no longer white….it is reddish. Will this cause problems?

So long as none of the Flats are clipped (either high or low), the color of the flat light source will not cause any issues for your monochrome QHY9s images.

The flat light source color can make some differences for OSC cameras but the differences do not affect the calibrated image's quality. (It only shifts the default color imbalance seen immediately after DeBayering. After neutralizing the background of the DeBayered OSC Images, the results will be the same regardless of light source color tint.) Like your monochrome camera, so long as none of the color channel pixels are clipped high or low, the Flat will perform its job correctly for OSC just as it does for Mono.