Old Scopes and Modern Imaging (or, learn from my mistakes!)

We can increase the scope's native FL by either using a Barlow or using eyepiece projection. 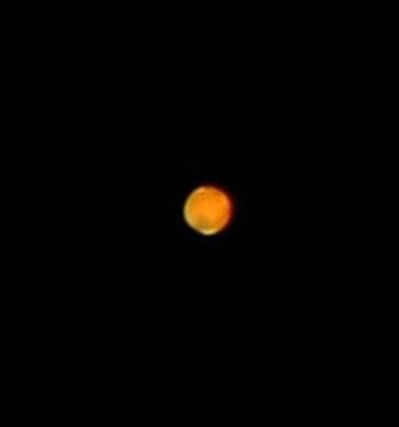 I pushed my Monolux 4380 to its limits to get that image of Mars with Syrtis Major.  I almost gave up.  Everything has to be lined up on the scope, and the seeing has to be near perfect, and focusing is a nightmare.  ANY vibrations wreck the attempt.

I don't try eyepiece projection any more.  Instead, I use Barlows...

You got that image of Mars today?!?! That is amazing! It's only 5 arc seconds across!

Those really are some amazing images, especially given the rather diminutive optics you're using. Have you done any imaging with your Questar yet?

One reason I tried EP first was that my vintage Barlow lenses weren't in good enough condition for digital imaging.  They doubled or tripled the focal length, but the resulting image was big & messy.  I was skeptical of the APO qualities of the GSO 2.5x Barlow, but it has made a difference. 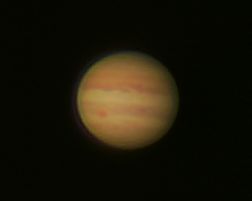 I see that now, by the file name 20140427T21.jpg- 27apr2014. I looked at Mars the other night in my 60mm Swift and also  Monolux/Carton 60x1000 and saw a nice sharp orange disk, albeit very, very tiny and no real discernible detail. That is why I was shocked to see this image, posted today and with no other date noted, lending to the assumption that it must be current.

I always enjoy your images.

That's impressive stuff Bob, it's not easy to get that kind of detail from 60mm aperture.  The seeing at our place rarely gets above a Pickering III, otherwise I'd pursue planetary imaging with my Tinsley.  Do you have good winter seeing?

Thanks y'all.  Yes, the seeing here in March is close to perfect for planetary.

Got other topics to post about - the good, the bad, and the downright ugly.

Thanks Robert, and I encourage folks with either of those Barlows to try them with digital imaging.  The GSO APO Barlow appealed to me in part because a few refractor owners said it seemed to reduce False Color...

The TV 1.25" 2.5X Powermate is excellent. It is pretty much a true telecentric. I use it with one of my solar H-alpha filters. 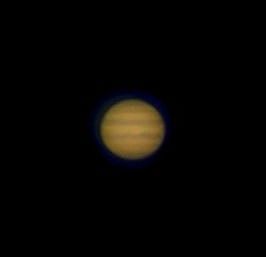 Took me a while to figure it out, but there are ways to limit that blue / violet ring:  Your imager should have a BRIGHTNESS control.  Setting that toward the minimum helps.  But if you go too low, the target can disappear!  I counter that by increasing the EXPOSURE LENGTH for each frame: 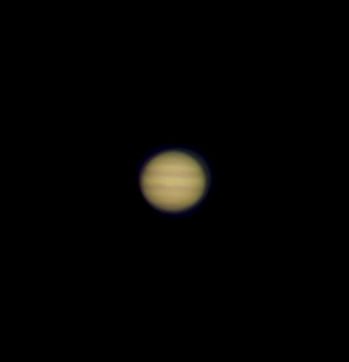 Adjusting these two settings really helps.  Depending on the graphics software you have, there's more magic you can work with the images to completely eliminate false color.  However, image detail degradation caused by CA is -- to the best of my knowledge -- unrecoverable.  That is, if your scope didn't grab those photons, and the chip didn't capture them, your final images won't have them. Most of our old scopes weren't designed for astrophotography -- much less digital imaging.  The vast majority don't have a clock drive -- a deal killer for DSO imaging.  Here's some other headaches...

- Loose / Sloppy Focusers.  My Edmund 4" F15 is my favorite observing scope, and it's a great visual instrument, but it stinks for digital imaging.  The focuser is the least precise of any that I use:  Goofy two piece pipe drawtube that can slip & sag; friction applied by the plastic knobs rather than from separate grub screws through the housing;  slotted accessory holder that may require clamping; and, a straight rather than helical cut rack (perfect focus often seems to be between two teeth where it's least likely to hold during a capture).  The digital imagers I use aren't very heavy, but try adding a metal eyepiece projection adapter + eyepiece + imager, and you find out real quick where the weak points are!

- Dinky / Toy Finder Scopes.  Yeah, try long-exposure manual guiding with the typical 5x24 or 6x30 straight-through finder (often with a severely masked singlet objective lens!) -- one reason I stick with lunar / planetary imaging.  I added a good quality 50x600 scope to my Edmund 4, and that made keeping the target on the chip much easier.

No, these were taken piggyback on my 6" f/10.3 Kludgescope, itself on my Tak NJP mount.

...but I could have use the C-80 on the SP mount it came with, which has excellent tracking with the original stepper motors and Skysensor (made just after the bouncy one - mine is very smooth).  But that mount has been apart in my shop for several years.

Here are some solar pictures that I have snapped with my iPhone and classic telescopes in the past couple of years:

Great images!  It's very impressive to see what can be coaxed out of these older scopes.

FWIW, attached is a Jupiter image I did about 10 years ago, using a 1972 Questar duplex in very good seeing near Fort Myers, FL.

Bookmarked!  BB can you speak to the mounts you use for imaging?  Do you use modern mounts with tracking or vintage mounts you happen to have drives for?  One of your posts implied manual but boy that seems like an exercise in frustration.

With eyesight getting worse,  my interest in EAA (as opposed to pure AP) is increasing.  And while I'd love to utilize vintage equipment to do it, it seems like more modern mounts would be a better fit.

You don't need a drive for lunar / planetary imaging.  The exposures are very short, and the stacking programs can compensate for the planet's drift across the chip.

But obviously, if your old mount has a polar drive, and the alignment is good, keeping the target in the chip's tiny FOV makes imaging less stressful.  And, I've found that keeping the target close to the chip's center during the capture makes for a more detailed final image.  My 1980s Meade mount uses a battery-powered mechanical polar drive that is very accurate -- visually, it'll keep the planet near C-O-F (Center Of Field) at 300x and higher.  But my 1964 Sears (RAO) 6336 has an even older mount & plug-in polar drive that is almost as accurate.  Ditto for my 1971 RV-6 plug-in drive.

IOW:  If your vintage mount tracks good enough to keep a planet near COF at 200x or higher visually, it should do well during your imaging sessions.

I can use 300 second (5 minute) captures at 30 fps (frames per second) for 9000 frames in one video file with all 3 of these old mounts.  In general, the more frames to stack, the better the resulting image. 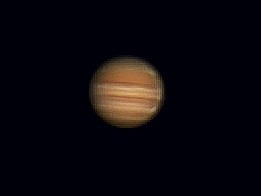 In comparison, my 1956 Goto-Hy-Score - a 60mm refractor - required manual tracking: 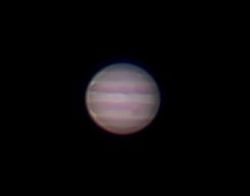 Not bad for a small refractor, but I could've done better.  I was determined not to have a yellowish disk (something I see with my fracs), and took out too much color!

(Goto offered a plug-in drive for these mounts, and I'd love to have one - bet it's pretty accurate, too!)

I'm not doing serious imaging with my classic scopes, but I am increasingly employing EAA (electronically assisted astronomy), enabling me to see fine details in faint DSO (clusters, nebulae, galaxies etc) with my small classic 3" refractor, that is fully equivalent to what can be seen visually in a 12" telescope.. 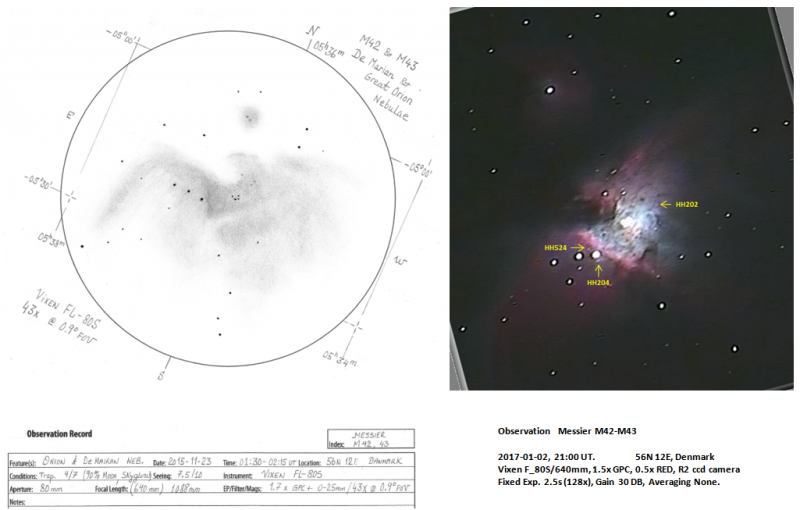 And another showing the swirls in the wake of GRS on Jupiter: 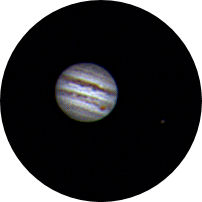 Both are snapshots from live EAA sessions with my classic Vixen FL80S/640 refractor from a Bortle red, suburban backyard just N of Copenhagen.

A couple of attempts at imaging, with my small classic refractors:

You can clearly see the DMD (dark matter deposits) of vulcanic glass and ash from fire-fountain vulcanism around Sinus Aestuum. 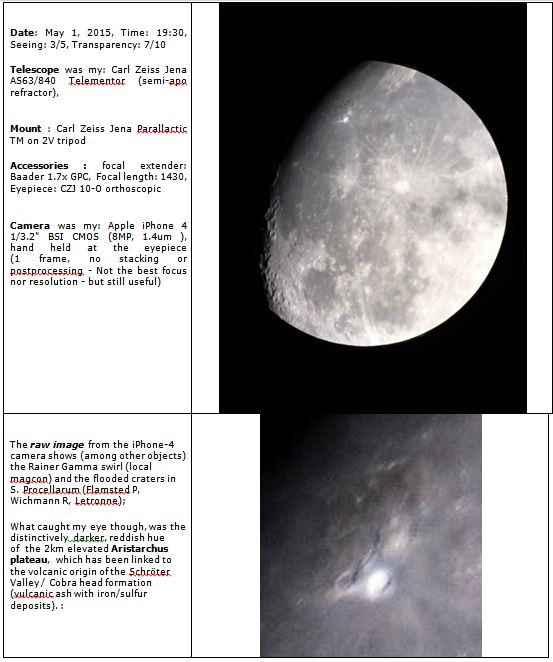 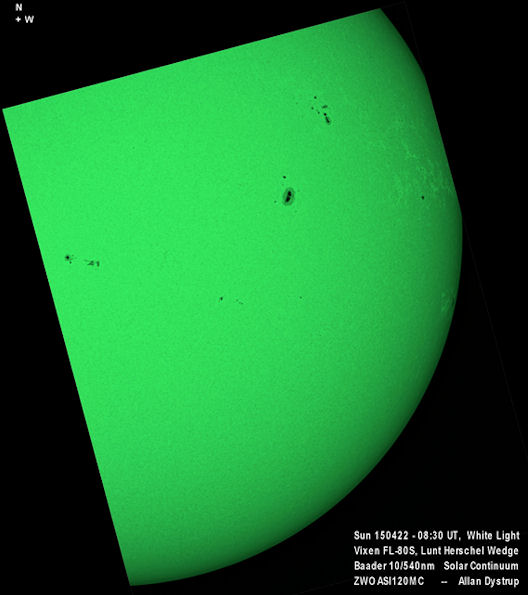 "I'm not doing serious imaging with my classic scopes, but I am increasingly employing EAA (electronically assisted astronomy), enabling me to see fine details in faint DSO (clusters, nebulae, galaxies etc) with my small classic 3" refractor, that is fully equivalent to what can be seen visually in a 12" telescope.."

Love this--that's exactly what I want.  Thank you Allan--wonderful images!