This last report from 11/28 had to wait on the clouds.  Not on 11/28, but since!  I didn't have a bright enough day to photograph the sketch until this morning!

Also known as the Pisces Chain, or the Pisces Cloud, this tight grouping is part of the Pisces Cluster, itself a part of the Pieces Supercluster.  The group consists of some 25 galaxies around the central line formed by the prominent chain from NGC 384 to 379 moving south to north.

Observing:  This was the last observation sketched for the evening as everything was starting to dew up and views were degrading.   The first galaxies seen were 383 and 380, easily the brightest of those visible.  379 was picked up quickly, but 384 and 385 took a bit of persistence and AV to locate for sure.  388 was possibly seen off to the SE.    The star field offered some helpful arrangements, including the very bright star near the edge of the southern FOV, and a couple easily discerned triangles.  Starting from the bottom, or north edge of the field:

NGC 379 was the most clearly elongated of the group, with a steady brightening toward the center of a halo that stretched along a NW to SE axis

NGC 380 was next up the line.  It was clearly brighter than 379 and more round.  The core was distinct and fairly bright but not quite stellar.  The rounded halo covered a larger area than 379.

NGC 383 is located very close to a notable star floating near the center of the FOV.  With a few other bright stars around, it helped to think of it as the tail of a kite formed with a triangle of stars to the south, or like the bottom of a miniature of the constellation Boötes.  383 is easily the brightest of the group, even though 380 seems a close second.  It’s also quite round and the largest of the group.  The core is bright and distinct, but also not quite stellar.  The halo extends further under AV than with direct vision.  NGC 382 – 383’s near companion to the north - was not seen, presumably lost in 383’s glow, particularly with transparency degraded.

385 and 384 moving up or south in the FOV were seen primarily in AV and remained featureless and even, gray smudges.  The Night Sky Observer’s Guide describes these two as having prominent cores, but that was not seen.  Conditions again, perhaps?  Both round glows appeared to be of equal size.

I’m fairly sure NGC 388 is the stellar object at the SE, or about 1:30 in the FOV.  It’s pretty tiny and would appear stellar, and looking at Pretty Deep Maps it appears in the right position.  There don’t appear to be any stars in that area that would be anything of that magnitude. So it’s got a question mark next to it, but I feel fairly confident that that’s it. Obviously several others were not seen for various reasons, my lack of abilities not least, I'm sure.

Sketching: white pastel powder and pencils on Mofuny 92lb black multimedia paper.  Various hardness pencils were used for the starfield, with the four brightest also getting a dot from the gel pen.  Used small/medium round brush for the halos of 380, 383, 385 and 384.  379 was done with #2 Filbert.   A fine point brush created the cores for the three that showed them, and the smallest fine point brush dotted the hard pencil point used to mark what I think is 388. 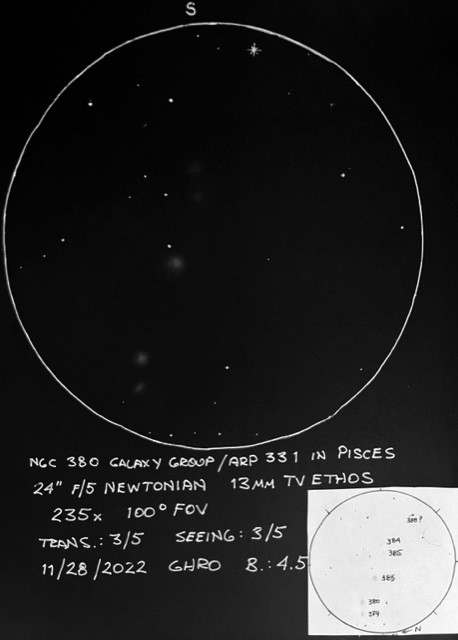 Another fine observation and realistic rendering Butch,well done and drawn.

Butch this is a very nice capture of these galaxies in Pisces.


Also tagged with one or more of these keywords: DSO, Observing Report, Sketching, Visual