What I found about old Russian school telescopes.

Yes, I think that they copied it from Alcor. Only it was not developed by astronomers, but by simple engineers. Therefore, there are no diopters, and the secondary mirror is of such a large diameter. And the wall of the telescope tube is made very thick - 5mm aluminum.

There is an interesting point about Alcor. The telescopes of the first releases, I suppose from 1980 to 1982, were equipped with a focuser not with a rack, but with friction. I asked at the Novosibirsk Instrument-Making Plant, but they could not accurately indicate the period of production of the first Alcor with a simple focuser.

The Zagorsky Optical and Mechanical Plant also did not respond to my request regarding the Kronos telescopes.

Ity's very nice to see those two scopes next to each other! Fascinating!

Alexey, or anyone reading this thread;

What was the purpose of the threads on the right side of the mount for the Russian School Maksutov? Do you know if there was some sort of counterweight on these scopes? It does not seem to be necessary. Here is one of my scopes with a counterweight just as an example. 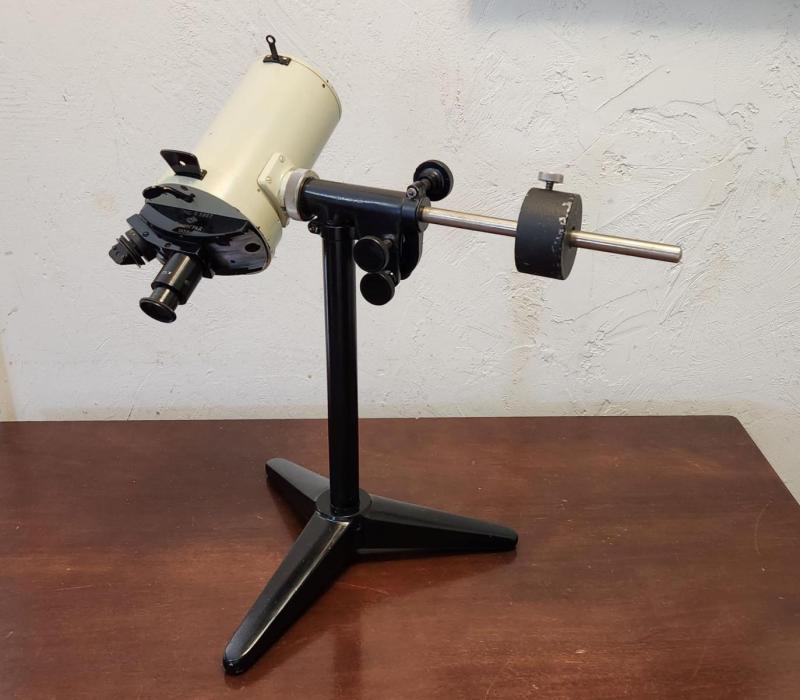 In one old book, I read that it was proposed to convert the azimuthal mount of the telescope to the equatorial one. By tilting the vertical stand at an angle equal to the latitude of the observation site and making a counterweight (it was proposed to make it from a tin can), it is possible to track celestial bodies using only one screw of fine movements. Apparently, for such an alteration, the designers provided for a threaded hole.

But the counterweight with the telescope was not supplied in the factory configuration.

Here's a photo from that book. True, they are of poor quality. In the photo is a simplified school telescope, produced in 1946-1947. Even in the book it is said that the counterweight is needed so that the telescope itself does not turn if its rack is not vertical.

The telescope of those years did not have a hole with threads in the mount.

The Zagorsk Optical and Mechanical Plant made not only an analogue of the Alkor telescope, but also an analogue of the TAL-1 Mizar telescope. It was called Kronos ZT-115. It was produced in the mid 90s of the twentieth century. According to undocumented information, Kronos telescopes were produced for only a year and a half. The telescope is very rare, for several years that I have been collecting the collection, I met it for the first time and I could not help but buy it. ))) Kronos ZT-65 appears on sale more often, about once every 1-1.5 years.

This is a Newtonian reflector with a mirror diameter of 115 mm and a focal length of 800 mm (possibly 802 mm, there is no exact information), F / 7. The secondary mirror of the telescope has a small axis size of 30mm, it is the same as that of the Kronos ZT-65. The telescope was mounted on a German-type equatorial mount equipped with both axle brakes and fine-motion screws. The telescope was packed in a huge and very heavy box that completely occupied the trunk of a Honda CRV car. The box was made from boards, not plywood. The telescope itself is also quite heavy - 26 kilograms. The wall of his pipe has a thickness of 8mm (!!!). The telescope tube has a finder with a break in the optical axis, 50 mm in diameter and 10x magnification.

According to the information that I was able to find, the telescope made it possible to obtain three magnifications: 58x, 100x and 179x. This is well achieved with one eyepiece and two Barlow lenses, as is done with the Kronos ZT-65. But the problem is that there are two eyepieces, completely identical in appearance (the same as those of Kronos ZT-65), but they are marked with different magnifications. The reason for this is not clear to me, there is no instruction from the telescope. The eyepieces are marked with one serial number, that is, they are all from this telescope.

Barlow lenses have the same small optical diameter as the Kronos ZT-65. It is noteworthy that the Barlow 100x lens has some kind of spacer in the form of a brass ring. She is unpainted. Why this was done is not clear. Perhaps during the design they made a mistake with the focal length and it turned out after production. The eyepieces of the eyepieces seem to be made of carbolite, while those of the Kronos ZT-65 were made of rubber. One eyecup, unfortunately, was broken.

The telescope was rather dirty, it was stored in a damp, unheated room, so some of its parts oxidized. I took a photo of the telescope in the process of cleaning and restoring the telescope.

There are only three counterweights. One seller did not immediately give me.

Here is a collection of Maksutovs, but not all of them fit on the shelf. )))

That is a fascinating collection of early maksutovs - I hope you have serious arrangements to preserve the scopes and the documentation, it is unique. And all built like a tank. A bit heavy perhaps, but they last very well.

I am especially struck by the ZRT-454 spyglass, I've never seen anything like that, though it makes sense for a compact terrestrial scope. In particular, the relay lens and the eyepiece are quite remarkably complex for such a small scope.

Also I love the dovetailed solid wooden crate for the Kronos ZT-115. One of my Russian scopes arrived in a similar crate - like something for the military - in mint condition.

The question of preserving the collection and reference materials, of course, came to my mind, but I have not dealt with it in detail yet. As long as I'm alive - nothing threatens the collection. ))) But after that I would not want it to be sold in parts or for some other reason ceased to exist. It's the same with articles - if the owner of the site wants to close it, then they will also cease to be available. So this issue needs to be addressed in the future. So that if in 100 years someone decides to assemble a similar collection, he would have reference materials. )))

And the box from Kronos ZT-115 is very strong and heavy. It is hard for me to imagine how the buyer of this telescope could bring it home from the store himself. I alone with great difficulty was able to load it into the trunk of a car. And this despite the fact that many parts from the equatorial mount were in a separate box. )))

By the way, the Maksutov ZLT-165 mirror-lens telescope was also manufactured at the Zagorsk Optical and Mechanical Plant. This is a meniscus cassegrain 165mm, 1/16. This telescope is not yet in my collection and I have hardly seen any mention of it on the Internet. There is only a model page on one of the sites. But I do not lose hope of finding him.

Alexey, this is a very interesting thread! Such interesting and unique telescopes that we seldom if ever see over here. Thanks so much for sharing your knowledge and collection with us.